Just over half of states with statewide sports betting are reportedly in line to meet tax revenue projections.
Photographer: Dominick Reuter/AFP/Getty Images

In the 12 months since the U.S. Supreme Court said states could legalize sports betting, just over half of states with statewide sports betting are in line to meet tax revenue projections, according to a new report.

Tax and gambling officials attribute the shortfalls to limited online gambling options and low consumer awareness. However, they foresee the second half of 2019 and 2020 will be dominated by state efforts to expand internet gambling, and other betting options. 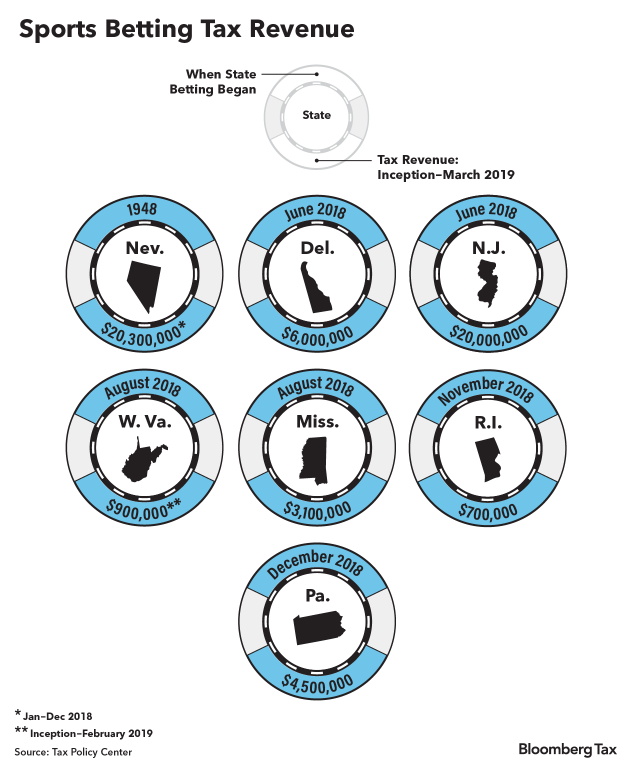 “Nevada and New Jersey really stand out when it comes to tax revenue—they’re both right around $20 million—and I completely believe this is because of online sports betting,” Richard Auxier, a research associate at the Urban-Brookings Tax Policy Center, told Bloomberg Tax. Auxier is also the author of a May 13 reportwhich in part details state sports betting revenues.

On May 14, 2018, the high court handed down its ruling in Murphy v. NCAA, which repealed the federal Professional and Amateur Sports Protection Act of 1992 (PASPA). That law prohibited states from “authorizing” gambling related to professional and amateur sports leagues.

Sports betting also is legal in Arkansas, Montana, New York, Oregon, Indiana, Iowa, and the District of Columbia, but those jurisdictions aren’t taking bets yet. In New Mexico, only tribal casinos can take sports bets. Sixteen other states are currently considering legalizing sports betting, according to the American Gaming Association (AGA).

This number is expected to rapidly grow, according to David Forman, senior director of research at the AGA. Forman anticipates between 18 to 20 total states could have sports betting “up, live, and running” by May 2020, and that those states bordering jurisdictions where the activity is already legal will be the first to take action.

So far, only Delaware, Nevada, New Jersey, and Pennsylvania are on track to meet or surpass original revenue projections. Auxier said Nevada and New Jersey aren’t a surprise. Alongside online betting, these two states have Las Vegas, Reno, and Atlantic City—gambling meccas, which have cemented betting into the identities of Nevada and New Jersey for decades.

“It’s extremely difficult to create an accurate revenue estimate,” Auxier said. “This is an activity that was previously illegal. It’s tough to know how many people will participate in something that was illegal just months ago.” 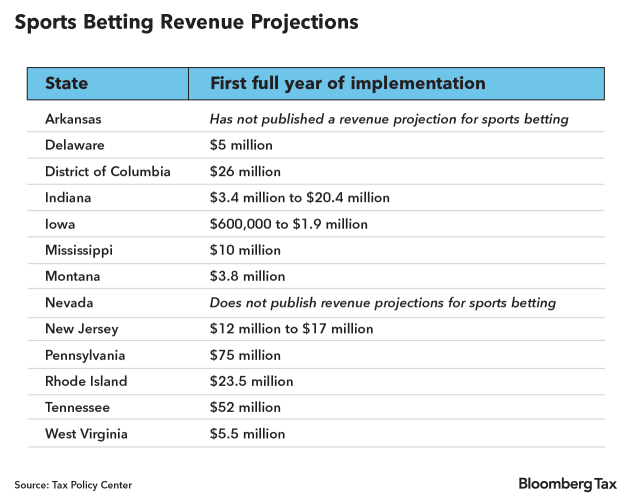 For West Virginia, Rhode Island, and Mississippi, unawareness among consumers could be partly to blame, according to Forman.

“Currently, only 56% of consumers in legal states are aware that sports betting is legal,” he said. “I do think these states will see an increase in revenue over time, consumer appetite will grow.”

Forman said in the past year, the biggest struggle for states was figuring out a legal system that worked best. He expects the next 12 months will be focused on “innovation.”

Alongside a growing number of states that are expected to legalize the activity, online betting is also expected to become more widely available in the coming months. According to Auxier, D.C., Rhode Island, and West Virginia aren’t far off, with anticipation all of them could offer online betting by the end of this year.

To contact the editor responsible for this story: at jharrington@bloombergtax.com; at mward@bloomberglaw.com