A legal clash over whether cash-strapped towns can charge Netflix and Hulu local franchise fees, treating them much as they have cable TV companies for decades, is coming to a head as Americans cut the cord in favor of streaming video entertainment.

“Every small town knows they have deep pockets,” David Brunori, a professor of public policy at George Washington University, said of the video streaming services. “And these companies are saying: ‘Bring it on.’”

Class-action suits filed this summer on behalf of towns and counties in Kansas and New Jersey pushed to 13 the number of states where localities are seeking compensation. And locales in Georgia, Indiana, and Missouri won important victories likely to keep their cases in state rather than federal court.

But the streaming video giants had reasons to celebrate, as well. In September, judges dismissed complaints in Arkansas, California, Nevada, and Texas, raising questions about the viability of the legal principles behind litigation nationwide against Netflix Inc., Hulu LLC, and other streaming services.

Towns argue streaming video services rely on locally regulated broadband internet connections to deliver services to subscribers and should be required to pay the same operational fees cable TV companies have paid for decades. But Netflix and Hulu say they don’t function within the communications infrastructure used by cable companies and shouldn’t be forced to pay the associated fees.

Determining winners and losers could take years, but the sides are primed for battle because of the dollars at stake.

Estimates of the purported past liabilities remain murky, but the number could surpass $1 billion if additional states join and capture support from sympathetic judges. And the revenue going forward is equally important as millions of households adopt streaming services and cancel cable television subscriptions—a stable source of local revenue for decades.

“This will be a fight that will go on forever,” said Brunori, who is also a senior director at the accounting firm RSM US. “There is a ton of money at stake and it’s worth fighting over, especially because streaming is the future of this segment of the economy.” 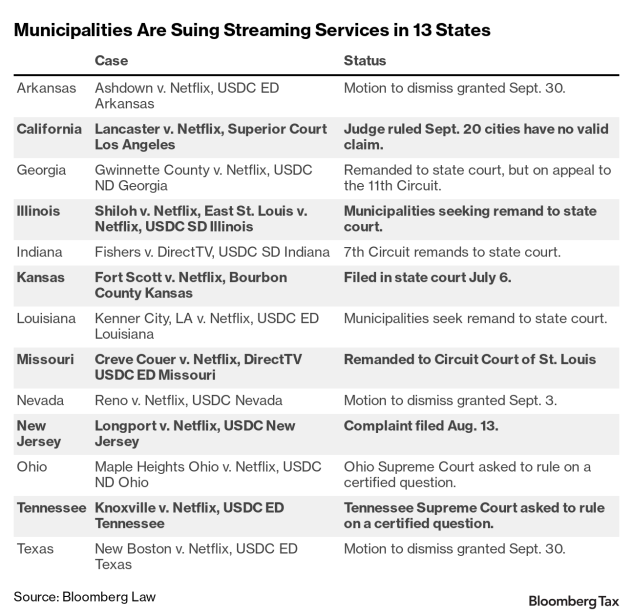 The litigation first emerged in 2018 with Creve Coeur, Missouri, filing suit against Netflix and Hulu in state court on behalf of Missouri municipalities. Similar cases have since been filed on behalf of towns and counties in Arkansas, California, Georgia, Illinois, Indiana, Kansas, Louisiana, Nevada, New Jersey, Ohio, Tennessee, and Texas, said Steve Berezney, a partner in the St. Louis office of at Korein Tillery, and lead counsel in the Georgia, Indiana, and Missouri cases.

The municipalities are motivated in part by recent losses in local revenue and pressures to preserve local taxing authorities to meet demands for services, said Ashley Ringle, director of communications for the Ohio Municipal League.

“It is important for our municipalities to protect the interests of their citizens and collect these franchise fees because the funding of services is so critical,” she said. “Our municipalities are struggling to provide these local services at a time when a lot of general revenue funds have been impacted by the Covid-19 pandemic.”

The plaintiffs generally argue the companies rely on broadband internet connections located in regulated public rights-of-way to deliver streaming entertainment to subscribers. The Texas case notes businesses using this infrastructure are required to obtain a state-issued certificate of franchise authority from the Public Utility Commission and then pay a franchise fee of 5% of gross revenues in each municipality where services are offered.

The defendants, the suits allege, have declined to apply for franchise certificates and failed to remit franchise fees to the municipalities—something cable television operators such as Comcast Corp. and Charter Communications Inc. have been doing for decades.

The stakes are high and getting higher, given surging growth in streaming entertainment and slumping interest in cable subscriptions as consumers “cut the cord.” A recent report by market research company eMarketer predicted the number of U.S. households with streaming accounts would more than double from 2017 levels to 72.2 million by 2025. Meanwhile, households using cable and satellite services are expected to drop from 94.3 million to 60.3 million for the same period.

“I am anticipating that the cases in average-size states like Missouri and Georgia will be worth in the hundreds of millions—not chump change,” Berezney said. “There is a reason why they are fighting this. There is a lot of money at stake, not only in the past but also moving forward.” 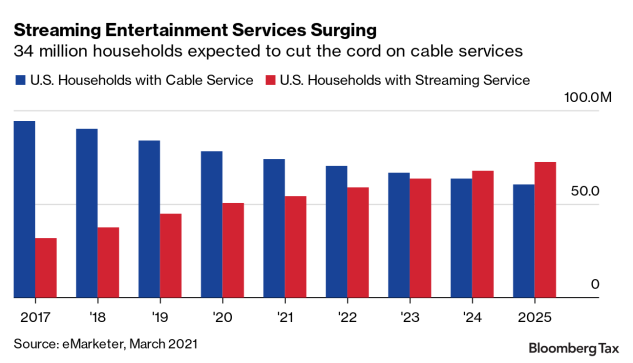 In a statement, Netflix called the suits “meritless,” adding: “These cases falsely seek to treat streaming services as if they were cable and internet access providers, which they aren’t.”

Briefs filed by Netflix and Hulu point to features in each state’s public utility or communications infrastructure laws specifying that franchise duties don’t extend to internet-based streaming services. The briefs further argue that most state statutes were crafted to specifically exempt services provided over the public internet.

“Netflix does not own, operate, use, or occupy assets in the public rights-of-way and does not deliver or provide its video content to its customers,” unlike internet service providers and cable companies, the company argued in a July 8 brief responding to the California lawsuit. “Instead, Netflix members, using their own personal devices, connect to the Internet through their ISPs to request content, and an ISP (not Netflix) delivers that content to the user over the ISP’s facilities.”

Several important themes have emerged in the litigation.

Much of the pretrial sparring has involved efforts by Netflix and Hulu to remove cases from state to federal court under the Class Action Fairness Act. The municipalities have prevailed in three cases, causing the streaming companies to push the Georgia, Indiana, and Missouri disputes to federal appeals courts. It remains unclear whether appeals will be accepted in the Georgia and Missouri cases, but the U.S. Court of Appeals for the 7th Circuit in July handed a major win to the city of Fishers, Indiana.

The 7th Circuit agreed the case should be heard in state court, pointing to protections under the federal Tax Injunction Act, which limits federal courts from interfering with the collection of state taxes when an efficient remedy is available in a state court. The unanimous three-judge panel noted it would be inappropriate for the streaming platforms to seek to “inject a federal court into matters affecting local revenue over which the State of Indiana and its municipalities enjoy wide regulatory latitude.”

Meanwhile, two federal judges have certified questions for the supreme courts of Ohio and Tennessee to answer regarding state law.

But a spokeswoman for Netflix emphasized that the company won on the merits in four courtrooms just in the last month.

On Sept. 3, Miranda M. Du, chief judge of the U.S. District Court for the District of Nevada, found the streaming entertainment companies don’t provide “video service” as defined under the 2007 Video Service Law, and are covered by an exclusion for any video content offered via the public internet, and dismissed a suit by Reno on behalf of Nevada cities and counties. That case is being appealed to the U.S. Court of Appeals for the 9th Circuit.

On Sept. 20, Judge Yvette Palazuelos of the Superior Court of Los Angeles found Netflix and Hulu have no franchise fee duties under California’s Digital Infrastructure and Video Competition Act because the companies don’t own or operate infrastructure in any public rights-of-way, and they can’t be characterized as “video service providers.” Palazuelos ruled the California cities and counties had failed to establish a valid cause of action, but left the door open for them to file an amended complaint.

And municipalities in Arkansas and Texas left the courthouse disappointed Sept. 30 after federal judges dismissed their complaints. The judge in the Texas suit found Netflix and Hulu held no certificate of franchise authority under the Video Services Providers Act, a prerequisite for the relief sought by the municipalities. The Arkansas judge said there was no evidence the state Legislature intended for municipalities to have authority to enforce the state’s Video Service Act.

The rulings validate much of the business community’s criticism of local “tax policy overreach” that has emerged since the first case was filed in Missouri.

“It does seem, in a lot these situations, these are localities going after wishful thinking,” said Fred Nicely, senior tax counsel for the business-focused Council On State Taxation. “They assert their laws apply, but they don’t have clear provisions to be able to impose their franchise fees.”

To contact the editor responsible for this story: at ghenderson@bloombergindustry.com