LeBron James to Los Angeles. Kawhi Leonard to Toronto. Carmelo Anthony to Atlanta, and then to Houston.

This has been one of the busiest free agency periods for the National Basketball Association in years. But as players settle into their new homes, they must keep in mind their new tax burdens.

Bloomberg Tax analyzed the biggest off-season moves in the NBA, the National Hockey League, and Major League Baseball (whose trade deadline closed this week) to shed light on how a move could either boost an athlete’s paycheck, or sharply slash it.

In the undoubted biggest offseason splash, LeBron James is headed West after playing the first 15 years of his career in the Eastern Conference. James’ move to the City of Angels will surely boost ticket sales for the Los Angeles Lakers, but it will cut his earnings significantly. Had James had stayed with the Cleveland Cavaliers, he would have brought home nearly an additional $3 million each year.

Thanks to California’s 13.3 percent state income tax rate—the highest in the country—versus Ohio’s 4.997 percent rate, James loses more money than anyone else that moved teams this off-season.

DeMar DeRozan, shooting guard and a former All-Star for the Toronto Raptors, was traded to the San Antonio Spurs in July. Whether the move was to DeRozan’s liking, it’s certain to please his wallet.

DeRozan’s federal income tax bill will rise—to 37 percent in the U.S., from Canada’s top rate of 33 percent—but his net salary ultimately increases by millions because of his move to Texas, a state without an income tax. DeRozan will net more than $2.5 million more annually by playing for the Spurs than he did playing for the Raptors.

The situation is reversed for Kawhi Leonard, small forward and newest star of the Raptors. Leonard played seven seasons for the Spurs and benefited from the lack of a state income tax. By moving to Toronto, Leonard will be subject to Ontario’s top tax rate of 13.16 percent. Tacked on to Canada’s federal rate, Leonard faces a combined 46.16 income tax rate and loses an addition $2 million annually in his move north.

In the NHL, star center John Tavares moved in free agency from the New York Islanders to the Toronto Maple Leafs. Because New York and Ontario have similarly high income tax rates (New York’s is 8.82 percent, while Ontario’s is 13.16 percent), his current tax bill will only be $60,000 higher than it would have been in New York.

MLB third baseman Manny Machado made one of the farthest moves in terms of distance, going from the Baltimore Orioles to the Los Angeles Dodgers, and his salary takes a hit. Machado moves to the state with the highest income tax rate (California has a 13.3 percent rate) from one with a rate of 5.75 percent, losing $1.2 million annually in the process.

However, Anthony still gets the money from the buyout, and after negotiating to give $2.4 million back to the Hawks, the other $25.5 million will be taxed at the rate of the state in which Anthony resides, according to Sean K. Packard, tax director at Octagon Financial Services in Virginia.

Anthony would presumably live in Texas, meaning he would dodge a state income tax bill and net $17.6 million—a higher net percentage than any of the athletes Bloomberg Tax analyzed.

DeAndre Jordan also scores big in his move to the Dallas Mavericks from the Los Angeles Clippers, netting an additional $3 million annually because of the lack of an income tax in his new home, the most of any athletes Bloomberg Tax analyzed.

For players nearing the end of their careers, moving to a jurisdiction with a lower income tax rate could play a role in free agency moves, according to Ryan Losi, a financial adviser and executive vice president at PIASCIK, a Virginia-based CPA and accounting firm.

“Depending on what a player’s post-career goals are, an income-tax-free state could definitely be more appealing,” he said. “We’re talking about hundreds of thousands of dollars here.”

Losi said income tax rates would never be the sole deciding factor in an athlete’s move, especially for rookies.

“Rookies are just looking to get paid, so they aren’t even thinking about income tax rates,” Losi said. “But for veteran players and superstars with leverage, a low income tax rate acts as a sweetener, it sweetens the pot, and makes an offer that much better.”

Losi said it isn’t uncommon for an athlete’s contract agent to negotiate for a larger salary with teams in high-income tax regions.

Every American professional athlete is also subject to “jock” taxes, which are calculated by the amount of time a player contributes to “income-related work” in any state that administers an income tax. The time is measured in “duty days.”

States with a sports franchise that don’t administer an income tax—Florida, Washington, Nevada, Tennessee, and Texas—don’t collect a jock tax.

Players are also subject to agent fees, which average about 3 percent of a player’s salary, according to Packard. High-income individuals making more than $200,000 are subject to a 0.9 percent Medicare surplus tax. 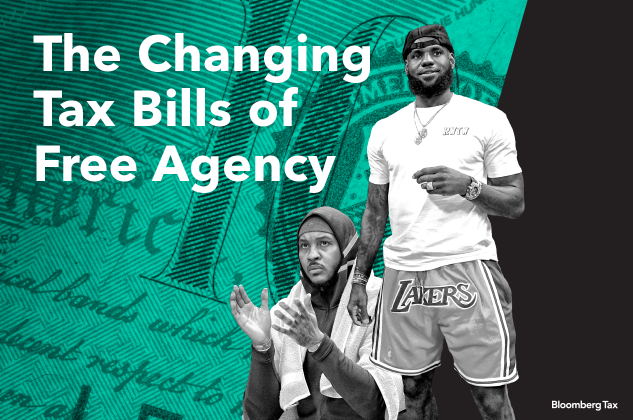 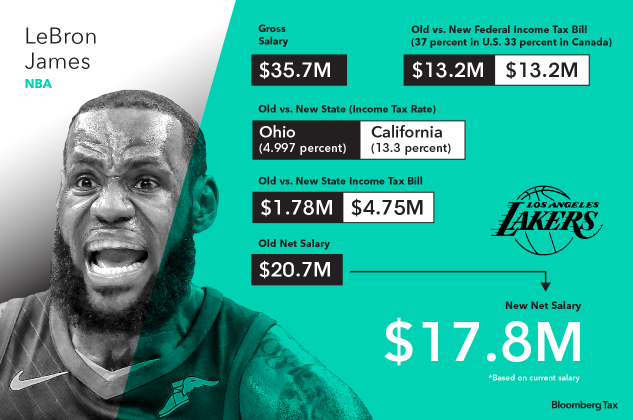 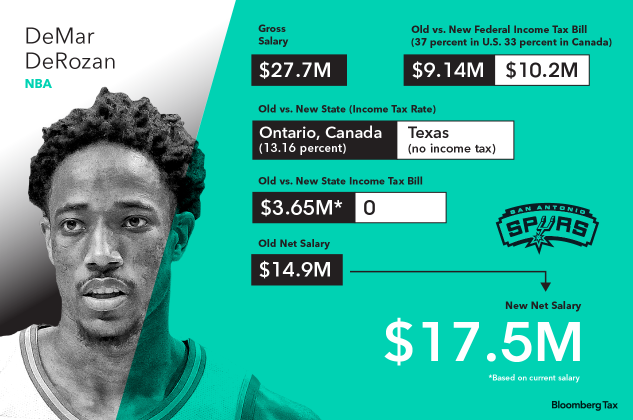 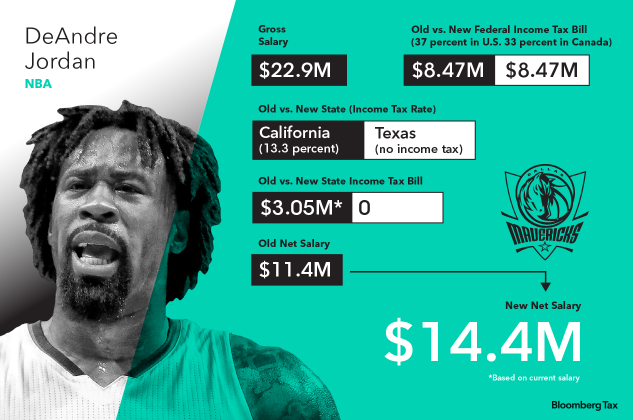 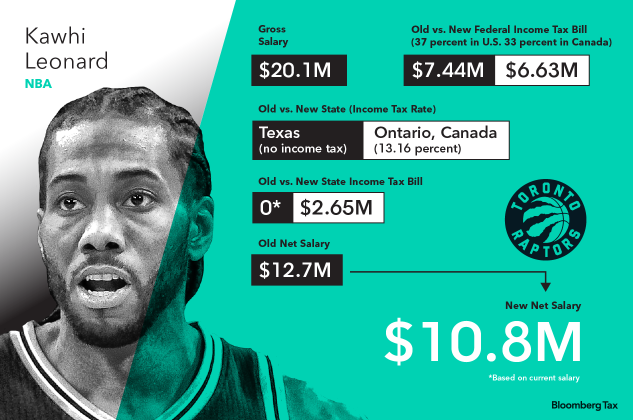 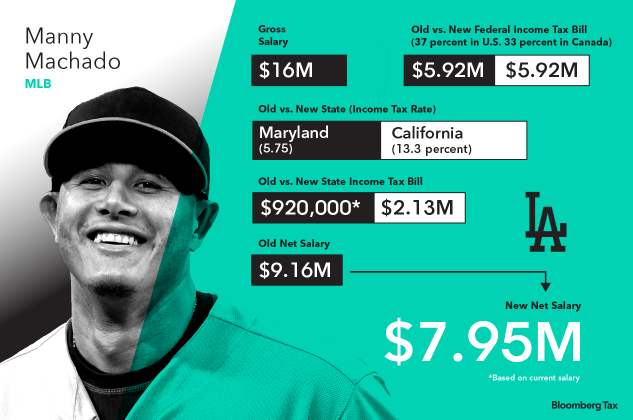 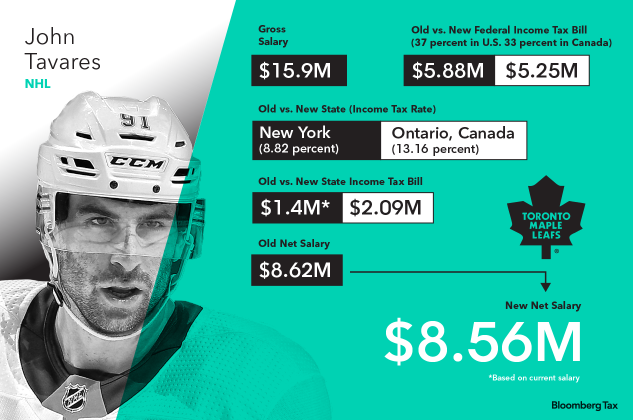 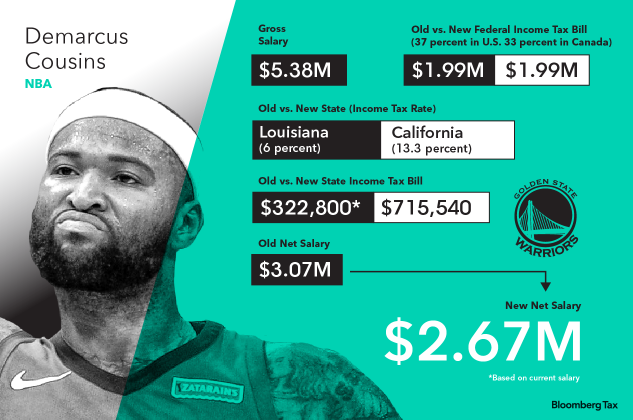 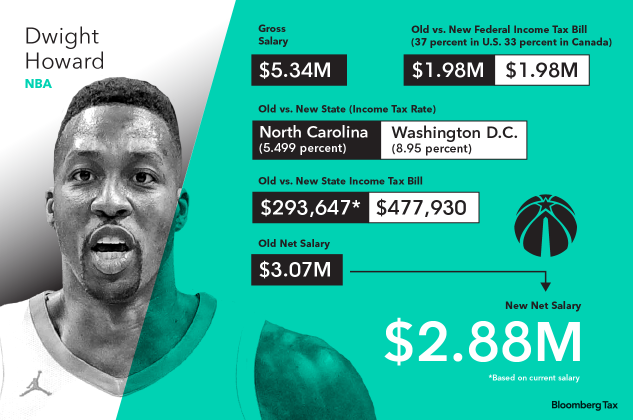 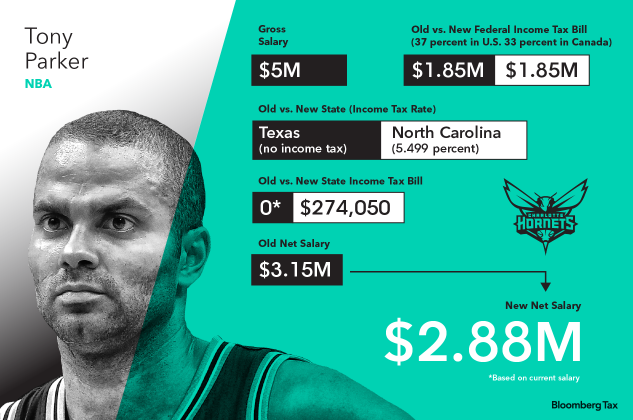 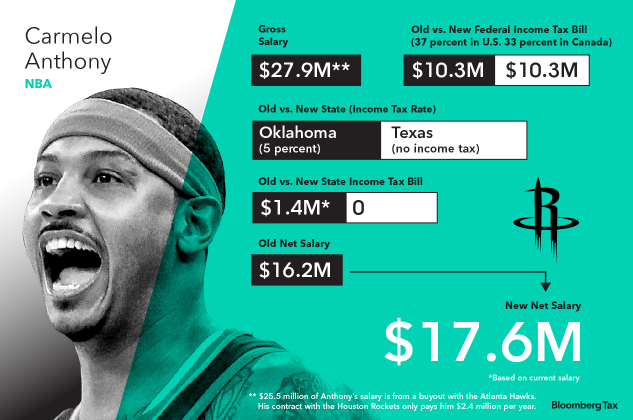 (Updated to reflect that John Tavares signed as a free agent with the Toronto Maple Leafs.)

To contact the editor responsible for this story: at rtuck@bloombergtax.com