New York tax authorities are targeting individuals earning as little as $100,000 a year who claim to have left the state during the Covid-19 pandemic, part of an unprecedented effort to recoup lost income-tax revenue.

Thousands of notices from the New York Tax and Finance Department have landed in taxpayers’ mailboxes since the filing season ended in May. It usually takes $1 million a year in income to trigger heightened scrutiny, but many people earning far less are receiving letters asking them to verify residency status and personal income allocation to determine whether they owe more to the state than claimed on their 2020 earnings.

State tax authorities have sent more than 149,000 audit notices, including automatically computerized letters known as desk audits, to taxpayers since January 1, according to the state agency.

“The state is being very aggressive in going after people who are claiming to have moved out of New York,” said Alan Goldenberg, a state and local tax principal at Anchin, Block & Anchin LLP, who has been receiving “multiple notices daily” from clients who are getting letters. “It’s amazing the volume of letters we’ve been receiving.”

New York is a particularly assertive tax collector and has historically relied on field audits primarily of high-net worth individuals. What’s unusual about its latest enforcement efforts, according to tax lawyers, is that it began sending notices to clients with salaries between $100,000 to $300,000 a year within weeks after they filed their state returns.

The triggering events for such audits appear to be if a taxpayer indicated they only lived in the state part of the year, or allocated less income to New York than prior years.

“It’s going out to everyone,” said Timothy Noonan, a partner at Hodgson Russ LLP. “In the past, the Tax Department would focus its enforcement efforts on higher income taxpayers past a $1 million or up. But they have been casting a wider net.”

James Gazzale, a spokesman for the New York Tax Department, declined to comment on the state’s current audit strategy but said the volume of letters being deployed by state authorities is consistent on year-over-year basis. 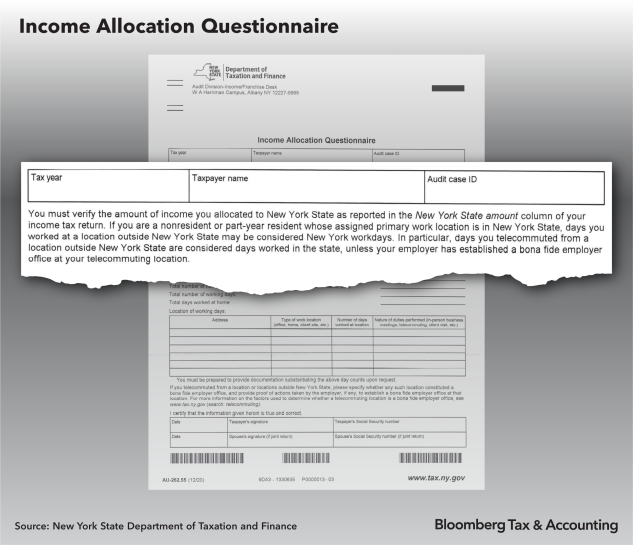 New York taxes the income of nonresidents if they work or perform services inside the state. That includes wages paid to a commuter who worked from home out of necessity during the pandemic. Some residents, like those in neighboring New Jersey, will receive a credit on their New Jersey state income tax to avoid double taxation.

Some have challenged that assertion, arguing that New York doesn’t have a right to tax income earned outside its borders.

Edward A. Zelinsky, a professor at Yeshiva University’s Cardozo Law School in New York City and resident of New Haven, Conn., filed a petition recently claiming a tax refund of $10,615 paid to the state of New York while he worked remotely at home during the 2019 tax year. He argued the Division of Taxation should revisit a 2003 ruling that the state has strictly adhered to given the prevalence of remote work due to the pandemic.

“New York’s continued application of the ‘convenience of the employer’ doctrine in this kind of case is economically self-destructive,” Zelinksy wrote in his petition. “Besides being unconstitutional, New York’s ‘convenience of the employer’ doctrine is self-destructive in the post-pandemic world. That doctrine leads to irrational tax overreach which encourages individuals to sever their ties with New York in the post-pandemic world.”

In June, the U.S. Supreme Court rejected a New Hampshire challenge to Massachusetts’ practice of taxing people who once worked in that state but started telecommuting from elsewhere during the pandemic. Had the case gone forward, the case could have influenced the fate of similar tax laws in New York, Pennsylvania, and three other states.

Tax experts say the pandemic has only accelerated an existing enforcement priority for the Tax Department over the last several months.

“They know a lot of people live in another state, claimed to have moved out of New York, and they need a way to recapture that revenue,” said Noonan.

Across the countries, Americans fled dense major cities like New York during the height of the pandemic either to second homes or to temporarily live with families, while some left altogether to the suburbs in search of more space.

Unlike field audits, where an individual auditor will be assigned to deeply vet a taxpayer’s whereabouts for an entire tax year, desk audits are computer-generated queries. They are sent automatically to individual filers when the system picks up an anomaly in a tax return from prior years.

Nishant Mittal, senior vice president and general manager of business travel for Topia, described the agency’s strategy as a “very big change” from prior years. He knows of at least 100 affected taxpayers who use an app called Moneao, which he co-created that helps users keep track where and when they were in a particular state. “There may be many, many more.”

In those letters, taxpayers are being asked to fill out a non-resident questionnaire collecting preliminary information like when the individual last filed a state tax return, when they became a non-resident and how many days they worked in New York.

Some have even been surprised with unexpected tax bills.

“A lot of people who left during Covid thought, ‘Oh, well, I’ll now pay tax to New York on 20% of my income because I haven’t been there since March,’” said Noonan. “That’s not the way it works.”

One of Noonan’s clients received a $10,000 tax bill with his desk audit notice. He couldn’t provide any other additional details because it’s a sensitive tax matter.

A client of Bingel who’s a Virginia-based resident earning less than $250,000 a year also recently received an audit notice, because he allocated only 10% of his income to New York. That was a 20% drop from the prior year’s return.

Sarah Chernick, a senior tax manager at CBIZ & Mayer Hoffman McCann, said one of her clients—a non-resident of New York who performs services in the city—recently received a desk audit letter saying, “‘Please show us all of your days of where you were.’ We had to answer that before he was actually issued his refund. It was painful.”

Not everyone is as fortunate. Taxpayers who are unable to prove their whereabouts are forced to pay state income tax even if they are a non-resident.

Individuals must meet five criteria to prove they are now domiciled in another state: the amount of time spent, the size and value of their homes, the location of valuable items like heirlooms or wedding photographs, the location of an active business, and lastly, where your family lives.

“The burden of proving where you were falls on you,” Chernick said. “If you can’t prove a date where you were, then the state is going to allocate that data to New York.”