Homes and businesses in Sheffield, Ill., which is within a federal opportunity zone.
Photographer: Daniel Acker/Bloomberg

But a lack of transparency and data tracking between these federal and state efforts makes it tough to determine if the money is being spent wisely.

Some states created their own version of the federal program or tweaked existing tax benefits to attract investments to these areas, but state officials have no clear way to cross-reference projects or know how much they’ve been providing through their own tax breaks toward federal opportunity zone projects, Bloomberg Tax research shows. Depending on a project’s specific business plan and its location, investors can apply for a variety of federal, state, and local tax breaks. Since there are no reporting requirements on how these programs intersect, states are hamstrung in assessing the full cost of their contributions to the federal program.

They also may wind up oversubsidizing projects at the expense of state taxpayers, said Kasia Tarczynska, a research analyst at the government transparency nonprofit Good Jobs First.

“There’s the question of a need for public support,” Tarczynska adds. “Are you really in need of public support? And if you are a developer, do you really need an additional level of subsidy?”

Opportunity Zones: Will Tax Break for Investors Benefit Communities Too?

Trying to Add it Up

The IRS does know which projects are in the federal program when a fund and its individual investors file reports to the agency. The federal agency could use that data to help states assess the program’s impact, but it can’t share it because it’s protected by taxpayer confidentiality rights.

Some states have still given it a try.

Bloomberg Tax contacted states to learn if they track how much of their tax incentives go to federal opportunity zone projects. Two-thirds of states said no, while others didn’t respond to records requests or comply with requested extensions.

A Bloomberg Tax analysis of the records provided by six states—Connecticut, Illinois, Iowa, Maryland, Ohio, and Pennsylvania—showed from 2018 through 2022 their economic development agencies supplied at least $520 million of their own tax credits to federal opportunity zones. The documents didn’t include incentives offered by other state agencies. 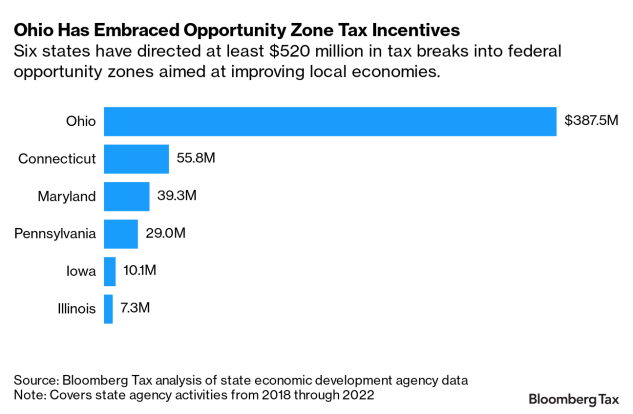 Indiana didn’t provide a figure to Bloomberg Tax about its own tax break costs, but estimated the total impact of federal opportunity zones on the state is roughly $23 million in lost state taxes and local income taxes from 2019 to 2022, according to Julie Weller, senior legal counsel at the Indiana Department of Revenue.

On the federal side of the ledger, opportunity zones were estimated to cost $1.6 billion over 10 years, according to a congressional report when the law was just enacted; a more recent congressional estimate suggests the cost will be considerably higher at $8.2 billion during the 5-year period of fiscal 2020 through 2024.

Many states know about federal opportunity zone projects in their communities by verifying addresses, application check boxes, and “word of mouth.”

To validate and approve their own tax benefits, states use a project’s address. At this stage, they can only try to identify whether an applicant is in a federal opportunity zone or just a business that happens to be located within its boundaries.

Applicants for tax breaks in Iowa are asked, “Is the project located in an opportunity zone?,” and give a ‘yes’ or ‘no’ answer,” said Lisa Connell, legal counsel at the Iowa Economic Development Authority.

The Missouri Department of Economic Development said they would have to go “application by application” to find out how many historic tax credits it’s approved for applicants that check a box in their form indicating the project’s in a federal zone. Even then, officials wouldn’t know which ones were actually using federal tax benefits versus those just within a federal zone.

The same happens in Georgia. “Since we don’t actively cross-reference project locations with federal opportunity zones, I have no way of pulling this information,” said Andrew Capezzuto, chief administrative officer and general counsel at the Georgia Department of Economic Development.

In Utah, officials say they know “anecdotally” how federal opportunity zone legislation has played out.

“Theoretically, a company could receive two incentives,” says Ryan Starks, managing director of growth and innovation in the Utah Governor’s Office of Economic Opportunity. “We hear a lot of interest and support, and investors are capitalizing on this opportunity. But at the end of the day, we’re not doing much, I would say, to capture hard data,” Starks added.

A 2021 survey from the Government Accountability Office reported that 41 of 56 states and territories said they were aware of at least some federal opportunity zones investments in their states. Still, most thought there were more they were unaware of.

Aside from subsidies, most states also couldn’t estimate foregone revenue for matching the same tax benefits as the federal government at the state level. Utah’s tax commission explained in an email that it doesn’t estimate lost revenue due to conforming with changes in federal law.

Governors helped select the zones at the start of the federal program and then it was up to the states to decide if, when and how to promote participation. The 2017 tax law that created the federal program offers investors delayed federal tax-free gains on the properties or businesses when they’re later sold. It didn’t include sharing that data with states, US Treasury Department spokesperson John Rizzo said. The IRS added that it doesn’t have federal zone information at the state level and providing such data would “breach the disclosure guidelines to which we must adhere.”

A bipartisan group in Congress led by Sens. Cory Booker (D-N.J) and Tim Scott (R-S.C.) introduced that would extend the federal program past its 2026 expiration as well as restore and expand federal reporting requirements that were part of an earlier version of the program, but stripped from the final version that became law. Their measure has stalled in the Senate and would need to be reintroduced in the new Congress starting in 2023 before any action could occur.

Their colleague Sen. Ron Wyden (D-Ore.) has also introduced legislation addressing data reporting and sharing for federal entities. He leads the Senate’s tax-writing panel and has been using that authority to press opportunity zone investors to provide more transparency than current law requires about how they use the program, measure community benefits, leverage tax breaks, and where they’ve gotten their money from.

“Currently, there are no safeguards or transparency measures in place to ensure taxpayers are not simply subsidizing high-end real estate investments by billionaires without demonstrating the benefit they are providing to low income-communities they claim to help,” Wyden wrote in a letter to a half dozen investment groups in January 2022 about his desire for greater federal visibility.

Even enthusiastic opportunity zone supporters say it’s essential to show its total cost for both federal and local governments. “It’s a high priority that we know this because the taxpayers are foregoing a significant amount of revenue here. States and the designated zones deserve to know what the impact of that was,” said Kenan Fikri, the director of research at the Economic Innovation Group.

States are on the hook to be a part of the effectiveness or shortcomings of these programs, Fikri added, “you can’t leave them in the information dark.”

Some state officials know of earlier efforts to provide data to their offices. “Originally, the Treasury Department was supposed to issue a report every year by census tract and opportunity zone, and what investment went in there,” said Mark J. Ritchie, who is a branch chief with Hawaii’s Department of Business, Economic Development and Tourism. “Right now, we have no way of even knowing that. If maybe you hear something it’s from a realtor, it’s anecdotal.”

Ritchie said his agency can’t say whether federal projects are also benefiting from Hawaii’s enterprise zone program. All but one of the federal zones are within the state’s zones. “If opportunity zones were a bit more successful program, we probably would have been cross-referencing it in a database.”

“We just kind of more or less gave up on it a little bit,” Ritchie says of Hawaii. “I have not heard of any real success story.”

Evaluating the overall benefit to a state or specific community from just federally-backed projects can be tough. In the GAO survey from 2021 as many states were unsure about the impact of federal opportunity zones as those who saw them as favorable overall. 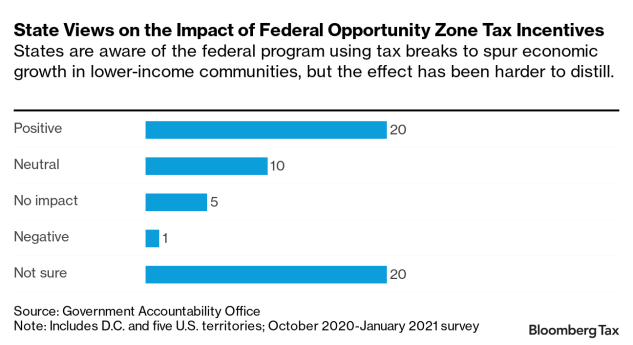 Limited research does point to a sense that state support isn’t a major factor driving decision-making by zone investors. Plenty of investment goes to states that don’t align with the federal program or don’t have capital gains tax bills to be reduced.

An August 2022 report by Novogradac, an accounting firm that tracks roughly 1,400 qualified federal opportunity funds, highlighted ten states receiving the most federal investment. Four have no capital gains tax—Florida, Tennessee, Texas, and Washington—while California and New York have decoupled themselves from the opportunity zones’ federal efforts and therefore don’t match any of these benefits at the state level.

Ohio didn’t make the list, but is one of the most opportunity-zone-friendly states among program backers because it offers numerous state benefits on top of federal tax breaks and others investment incentives. The state has a nonrefundable tax credit equal to 10% of a state taxpayer’s investment in an Ohio qualified opportunity zone fund. In June, lawmakers extended the benefit to out-of-state investors with no Ohio income tax liability.

John Sciarretti, a partner at Novogradac, thinks Ohio’s own opportunity zone tax credit program has been successful because it was renewed, increased, and generally embraced.

“I think the expectation is that any investment is going to create impact, but as far as what types of impact without reporting, we don’t know,” Sciarretti said.

To contact the reporter on this story: at aserrao-roman@bloombergindustry.com

To contact the editors responsible for this story: at kwayne@bgov.com; at jharrington@bloombergindustry.com