Disasters trigger automatic relief on property taxes in a handful of states, but because the coronavirus pandemic isn’t causing physical damage to real estate, granting that relief is trickier for states and localities.

Physical damage to homes from hurricanes, tornadoes, or other natural disasters typically prompt automatic relief from many states, such as delayed property tax bills or temporarily reduced property tax payments. That relief can also extend to crises that state governors declare to be disasters, such as Hurricane Harvey in Texas. But so far in the pandemic’s wake, at best property owners are seeing extended filing deadlines, as was done in states such as Florida, West Virginia, Iowa, and Washington.

Part of the reason is financial: Property tax revenues are critical for local governments, making up half of their revenue in 2017 according to census data. Between filing extensions, the abrupt slowdown of the economy and the need to fund critical public programs, states and localities are already hurting. Many must weigh whether to risk going belly-up while giving much-needed tax relief to homeowners.

For the first time ever, every state has declared an emergency or natural disaster, Catherine Collins, a research professor and interim associate director of the GW Institute of Public Policy at George Washington University, said in a report released late last month.

The relief is badly needed, but whether it will come, is an open question. Much of the power to offer relief lies at the local, not the state level.

“It’s not like the house burned down or or your basement flooded,” she said. “It’s not clear whether Covid is, in fact, going to be a triggering event.”

The IRS also often steps in after disasters. After Hurricane Harvey, the agency implanted a program to help calculate unreimbursed losses based on damage incurred by the storm.

At around that time, the IRS also initiated an ongoing set of special procedures that could be used for subsequent damage in federally-declared disaster areas, an IRS spokesperson told Bloomberg Tax. That’s available here. 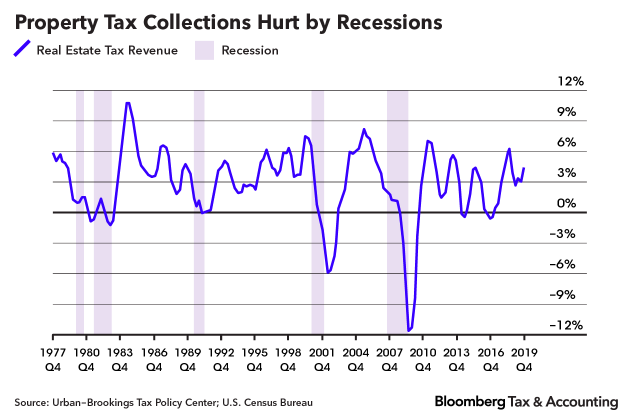 At least one state, Texas, has already made its plans clear.

The state attorney general ruled Covid-19, the disease caused by coronavirus, wouldn’t trigger the relief the state offered after Hurricane Harvey, which in some cases resulted in property tax savings of 10% to 30% on the value of real estate.

Other states may follow that position, some tax professionals said.

Challenging such a stance is hard because it requires showing physical damage to property, added Jared Walczak, director of state tax policy at the Tax Foundation.

“It would not surprise me if other states take some preemptive action, trying to argue that the definition of damage in their statutes requires a showing of physical damage,” said Eric S. Tresh, a partner in Eversheds Sutherland LLP’s state and local tax practice.

Texas, among other states, includes epidemic in its definition of a disaster. That point could come up in court, as taxpayers look to have relief granted for economic losses beyond the scope of physical damage, added Tresh.

“We believe that when you look at the definition of a disaster, which specifically includes an epidemic, and the entire definition of damage, that one reasonably could conclude in a different direction than the Texas Attorney General,” Tresh said.

Some localities have limited power to adjust payment deadlines, depending on what the state has set out in charters or in law, said Walczak.

“Even though the locality is the one levying the property tax, they cannot necessarily change how it is administered,” he said.

The localities that can offer relief, have been doing so. For example, several counties in Washington state have delayed the first half of property taxes, typically due April 30, for 30 days.

Some of those counties also haveoffered installment plans for property owners financially affected by Covid-19, spreading the payment over six months, Collins said. The delays apply only to those who pay their taxes directly, enabling counties to continue receiving some tax revenues from mortgage escrow accounts.

Counties who can’t extend deadlines on their own—such as those in California, New Jersey, and Ohio—are asking state officials for help, with mixed results.

In California, Gov. Gavin Newsom (D) signed an executive order that waives penalties through May 6, 2021 for property taxes paid after an April 10, 2020 due date if property owners can show they’ve experienced financial hardship due to the pandemic.

“Any delay in payments beyond the April 10 property tax deadline, for individuals or businesses that can pay, will tip local governments into insolvency at a time when our residents need us the most,” the statement said.

Several counties in Ohio and New York have petitioned their state leaders to push back filing deadlines to later this year, although neither state has followed through.

The longer the pandemic continues, the harder it will be for states to decide how to proceed.

“We may see more questions either raised by local governments or by taxpayers,” said Walzcak. “Every state has a different approach here. Property taxes are generally local but in many states local authority derives from what the state has set out.”

(Updates status of late penalties in California starting in the twenty-first paragraph. An earlier version of this story was corrected to clarify IRS involvement in the issue after Hurricane Harvey. )