Puerto Rico officials are weighing an overhaul of the island's tax system. Shown is an aerial view of San Juan.
Photographer: Daniel Slim/AFP via Getty Images

After years of tweaks and modifications, Puerto Rico is pushing for a major overhaul of a tax system that’s been dubbed “grossly unfair” and inequitable.

There are a handful of competing proposals on the table, but most have a common aim: to broaden the tax base and simplify a complex and byzantine system of more than 400 tax breaks. According to one recent study, those breaks—including credits, deductions, deferments, exemptions and preferential rates— cost the administration $23.3 billion a year, or about 21% of its GDP. That figure rises to 31% if measured against its gross national product, the island’s official economic metric.

“There’s consensus that Puerto Rico’s tax system would not be recommended by anyone as a model to follow,” said Sergio Marxuach, director of public policy at Puerto Rico’s Center for New Economy. “That’s an indication that it’s time for an extensive and in-depth reform.”

But before that can happen, the island has to contend with the expiration of its critical corporate excise tax, said Puerto Rico Treasury Secretary Francisco Pares.

Enacted in 2010, the excise tax, known as Act 154, is a 4% tariff on products made in Puerto Rico and acquired by the manufacturers’ parent company.

The IRS has allowed companies to receive a foreign tax credit for tax payments made in Puerto Rico, and the island has used Act 154 to lure pharmaceutical, aerospace and other manufacturing companies. While fewer than 40 entities rely on the concession, those companies provide tens of thousands of jobs and represent about 15% of the island’s annual tax revenue.

Even so, the US Treasury has said Act 154 is incompatible with federal law and must be phased out by the end of this tax year. 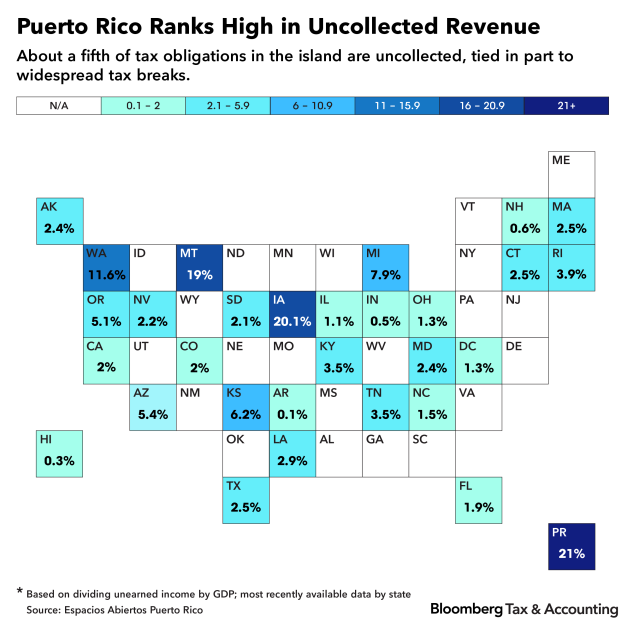 Pares says he’s hammered out a tentative deal with the US Treasury that will allow the island to swap the excise tax for a 10.5% local income tax while still allowing businesses to take the foreign tax credit. But it requires the local congress to pass enacting legislation. And until that happens, it’s impossible to talk about more comprehensive reforms that analysts and lawmakers are clamoring for.

“The issue of Act 154 must be resolved first in order to determine its impact on revenue collection and economic activity,” Pares said. “It might be favorable or unfavorable, but once it’s finished we’ll have a clearer picture” of what kind of additional reforms are possible.

The Treasury presented a 100-page draft tax reform in May that proposes simplifying the tax code and reducing the corporate tax rate, which currently runs from about 18.5% to 37.5%, to a fixed rate of 15% for all but the largest companies. The plan also proposes indexing tax brackets and capital gains to inflation.

Parallel to that effort, Senators Juan Zaragoza and Thomas Rivera Schatz have presented a bill that would tighten requirements around Act 60, a current batch of incentives aimed at luring wealthy individuals to the island. Under their plan, investors seeking the preferential tax rates would have to invest a minimum of $1 million and provide additional proof that they were creating jobs. The bill would also open up the perk to those already living on the island.

Separately, House Speaker Rafael Hernandez likewise said he plans to tweak incentives. But he also wants to end a business inventory tax that makes imported goods to the island more expensive. And he plans to introduce a property-tax bill that would require officials to update property values but lower the overall property tax rate—unlocking additional tax revenue.

The Puerto Rico Manufacturers Association has been working with the government on the overhaul. While the tax swap Pares negotiated with Treasury is designed to be revenue-neutral for the government, its impact on industry will be uneven, said the group’s executive vice president, Yandia Perez.

“There are companies that will be seriously financially impacted” by the new tax scheme, she said, refusing to identify any particular company or sector. “There is the risk that some of them might say ‘it’s no longer attractive for us here.’”

Not taking any action, however, “could be a devastating scenario for us,” Pares said. The resulting industrial slowdown ”would have terrible and substantial consequences for tax collection and the economy of Puerto Rico.”

Bloomberg contacted a dozen companies that could be affected by the new terms. Amgen, Eli Lilly, Honeywell and AstraZeneca subsidiary iPR Pharmaceuticals declined to comment; others didn’t respond.

One of the key targets of the broader tax reform is the island’s tangled web of incentives.

Perez, from the Manufacturers Association, said the business community has been asking for a simplified and competitive tax code that supports economic growth.

“The island needs to be attractive to both local and foreign companies,” she said. “We’ve seen businesses that have decided to start their companies in Florida and elsewhere because it can be frustrating here.”

A study by local think tank Espacios Abiertos found 463 tax breaks embedded in the code. In addition, the government has no data on the fiscal impact of almost half of those measures, said Daniel Santamaria Ots, senior policy analyst at the group. Without that information, any reform is just a stab in the dark, he said.

“It’s important to know what corporations, individuals and consumers are actually paying, and what’s not being registered as revenue,” he said. “Without that, we’re likely to have a tax reform that is biased, incomplete and, most likely, unfair.”

The IRS agrees. In a 2020 report to Congress, the agency said it couldn’t obtain enough data from local agencies to determine if beneficiaries of the incentives were, effectively, tax cheats.

That perk lures wealthy individuals with the promise of legally skirting US federal income tax. Once they’re Puerto Rico residents, they pay a 4% income tax and zero tax on capital gains, dividends, and interest—making them particularly attractive to those who measure their wealth in cryptocurrencies.

But that incentive isn’t available to those already living on the island, where most people pay capital gains levies of about 15%, income tax of up to 30%, and an 11.5% sales tax—the highest in the US.

The influx of wealthy outsiders to an island where 40% live below the poverty line has fueled the perception that the tax code is deepening inequality.

“It doesn’t matter if the investment is made by a person from Puerto Rico or from Ireland, the important issue is job creation for professionals on the island,” economist Heidi Calero said, adding that the benefit should be available for local residents.

Anecdotal accounts and local media reports have suggested that some investors have hired people for low-skill jobs. “You have to see what kind of jobs they are because if it’s catering and house cleaning, that’s not economic development,” she added.

“The problem with the law is that it does not include the people who live here every day and that it gives an incentive to a small group that does not need it, who already have enough privilege to live well,” added women rights activist and health educator Marisabel Roman, saying that she is concerned to see essential services such as health care go increasingly underfunded.

Treasury Secretary Pares said he agrees with the idea of extending Act 22-60 benefits to locals in principle, but that the devil will be in the details. Under federal rules established after Puerto Rico’s historic bankruptcy, all tax measures must be revenue-neutral.

Since 2012, and despite previous reforms, the island’s economy has only grown during two years—2019 and 2021—and in both cases it was directly tied to an influx of federal pandemic and reconstruction funds.

International studies, and Puerto Rico’s own experience, suggest tax reform is not a panacea, said Santamaria Ots with the Espacios Abiertos think tank.

“We know empirically that tax reform helps redistribute income,” he said, “but it doesn’t necessarily lead to growth.”

To contact the reporter on this story: at aserrao-roman@bloombergindustry.com; Jim Wyss at jwyss9@bloomberg.net