Seven states, including California and Illinois, are poised to join nearly a dozen others like New York and New Jersey that have skirted around the federal cap on state and local tax deductions as the prospect of a federal fix remains elusive.

New York and Idaho both recently passed legislation to work around the controversial 2017 tax law feature known as the SALT cap. Their states created an optional tax, letting owners of passthrough entities—where income flows through and is taxed on the ownership level—circumvent the $10,000 limit on deductions. Georgia and Arizona are awaiting their governors’ approvals of similar SALT cap workarounds and lawmakers in California, Massachusetts, Illinois, North Carolina, and South Carolina are debating bills of the same nature.

President Joe Biden and Congress have been under increasing pressure from Democrats to get rid of the cap entirely.

“Don’t pass another bill until you fully repeal SALT,” N.Y. Gov. Andrew Cuomo (D) said at a briefing last week where he signed the state budget that included the workaround. “It was a partisan, political attack on this state,” he said.

Connecticut, Maryland, Louisiana, Rhode Island, Wisconsin, Arkansas, Alabama, and Oklahoma approved workarounds earlier. State lawmakers in Ohio, Pennsylvania, and Colorado are expected to introduce theirs as early as next week, according to Brian Reardon, president of the S Corporation Association. The group leads state legislature lobbying efforts to soften the impact of the SALT cap.

In some New York congressional districts, the average deduction lost because of the SALT cap can be more than $100,000 a year, according to IRS data.

Momentum for a repeal is building as Democrats hold a majority in both House and Senate in the Congress. Many states have called the SALT cap ‘weaponized’ tax policy, arguing it unfairly targets high-tax states and Congressional districts which tend to be under Democrat control. Of the 40 congressional districts with the largest SALT deductions disallowed under the 2017 tax law, 39 are represented by Democrats.

Democratic governors from seven states are pushing Biden to act, a House bipartisan caucus is studying a repeal, and more than 20 lawmakers say they will not support Biden’s infrastructure plan unless it includes a cap repeal. Key Democratic leaders including House Speaker Nancy Pelosi and Senate Majority Leader Chuck Schumer are among those sympathetic to a repeal, although they have yet to propose an ultimatum.

Last year, the IRS issued guidance, permitting state-level taxes allowing passthrough entities to work around the SALT cap. Eleven states have made the workarounds available to sole proprietorships, partnerships, limited liability companies, and S-corporations—one of the most common business types in America. These businesses usually don’t pay income tax because their profits are passed through to their partners for income tax purposes.

These states will give business owners a credit in exchange for and offsetting a special tax they pay at the business level. That credit is not subject to the $10,000 limit their individual state income taxes have. 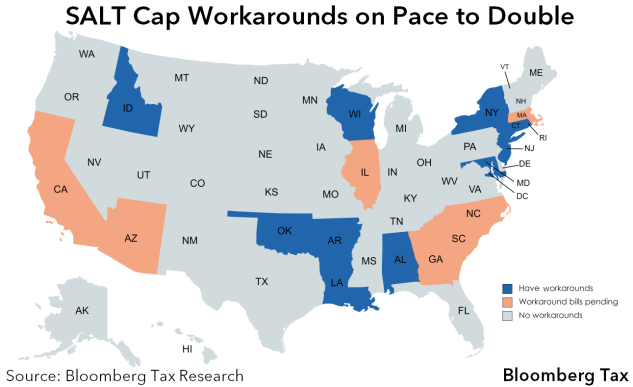 A recent think tank report found that removing the cap without making other tax changes could compound the federal tax code’s disproportionate economic impact on Black and Latino families. Over 70% of the benefit from the restored deduction would benefit wealthy white households with over $200,000 in annual income, the Institute of Taxation and Economic Policy study found.

Proponents of the cap have long argued that the deduction overwhelmingly benefits the wealthy.

“Repealing the SALT cap would primarily benefit higher-income taxpayers, the majority of which are white taxpayers,” said Lucy Dadayan, a senior research associate at the Tax Policy Center.

Given the average American paid $15,748 in federal state and local income taxes in 2018 according to IRS data, most taxpayers would not financially be able to deduct more than $10,000 state and local taxes from their federal bill.

Biden’s forthcoming tax plan, to be formally announced Wednesday, is expected to call for raising taxes on the wealthy at a level not seen since the 1970s, expanding federal support for lower income and middle class Americans by shifting more of the tax burden to high income earners.

Some of those changes for wealthy individuals means that paying income taxes at a business entity level may remain a valuable tactic for taxpayers who have already opted into the workarounds, said Ed Decker, a partner specializing in passthrough taxation at the Washington National tax practice of RSM LLP.

If Biden opts to raise the $10,000 cap instead of removing it, these state workarounds would remain a valuable tactic for many of the business owners that already use them, Reardon said.

“Every state has been unique,” he said, but for the most part workaround plans “have moved forward smoothly and companies are benefiting from this restored deduction.”

—With assistance from Lindsay Bartholomew, Sarah Adkisson, and Donna Borak.