Look to Maryland to lead the way early in 2021 with a one-of-a-kind gross receipts tax on digital ads targeting tech giants such as Amazon, Apple, Facebook, Google and Netflix. New York, Nebraska, West Virginia, Washington state, and the District of Columbia could follow suit with Maryland-style bills or measures that simply extend their sales tax codes to include digital advertising.

Taxing digital players is already a major international issue. The Organization for Economic Cooperation and Development (OECD) has been seeking agreement among nearly 140 jurisdictions to rewrite global tax rules to better fit digital business models that can operate in a market without physical presence. States are similarly motivated by a list of Big Tech grievances including lax privacy controls, spreading misleading content, monopolistic business practices, and tax avoidance.

“We operate under the general philosophy that everybody needs to have a stake in the game in terms of paying taxes,” said Delegate Eric G. Luedtke (D), who sponsored Maryland’s tax bill. “This is one area where there needs to be some clarification that taxes have to be paid by the big multinational companies.”

Online advertisers are already on the defensive.

“We are gearing up for this to become a very convenient and easy way for states to raise revenue without doing the homework or due diligence,” said David Grimaldi, vice president for public policy at the Interactive Advertising Bureau, a trade association representing 650 global media and tech companies. “There are so many gradations of how this goes wrong for economies and consumers, but I think we will see more of this next year.” 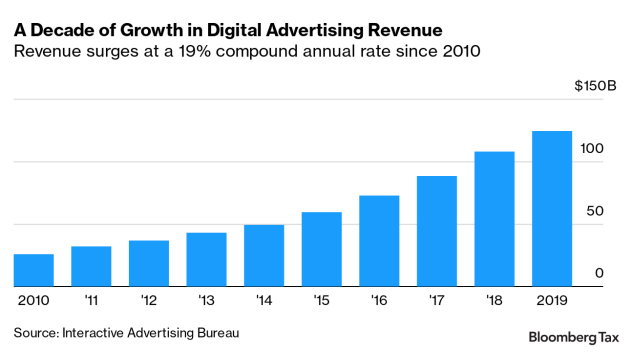 Digital advertising has become a powerful force in the U.S. economy and an untapped frontier for state revenue agencies.

Online advertising receipts totaled $124.6 billion for 2019, a 15.9% increase from the previous year, IAB concluded in its most recent revenue report. And digital advertising has become one of the fastest-growing segments of the economy, achieving a compound annual grow rate of 19% since 2010, the trade group reported.

The pandemic has slowed revenue growth, but IAB’s vice president for research Susan Hogan said she still expects an uptick of at least 8% for 2020.

Revenues from digital ads outpace any other segment of the advertising arena. Television and newspapers, once the leaders, came in second and sixth respectively in 2019. 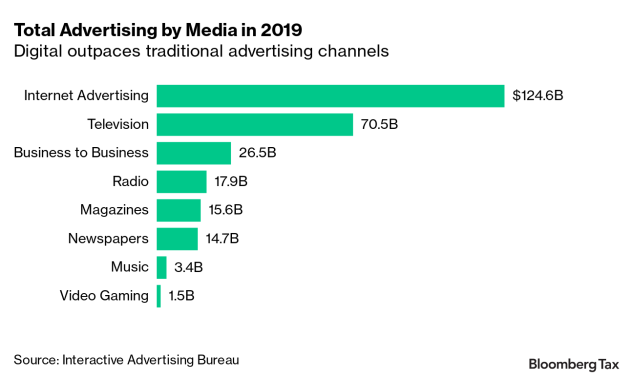 Gauging the states’ potential share of the digital advertising bonanza depends on the tax models adopted in each state, but an estimate of roughly $14 billion annually across the U.S. is not unreasonable, said University of Tennessee economist Bill Fox. Indeed, Fox estimates the states annually forgo $2 billion from Facebook alone.

Maryland’s Democrat-controlled Legislature is hoping to impose a tax on tech companies’ gross revenue on digital advertising as part of a broad strategy to fund education. The proposed law (H.B. 732) was vetoed by Gov. Larry Hogan (R) in June, but the Legislature is widely expected to override his veto early next year.

A fiscal analysis drafted by the Maryland Legislature estimates the change would generate $250 million annually.

Google and Facebook declined opportunities to discuss the tax issue, directing Bloomberg Tax to their trade associations. A lobbyist for Google, however, told Maryland lawmakers the tax would undermine the “great benefits from an Internet that is largely free to users” and disrupt competition between Internet business models.

“Further, the legislation would create an imbalance between similar businesses that obtain revenue through online advertising and those that employ other revenue models, including subscription fees, to support their sites,” wrote Google’s chief of state legislative affairs Ron Barnes in a letter to the Senate tax committee. “This becomes more regressive for people unable to afford making that choice.”

Strategies similar to Maryland’s bill received consideration in other states this year.

That list of states will certainly grow during 2021, said Darcy Kooiker, a state and local tax partner in the Bellevue, Wash. offices of Armanino LLP.

“From a policy perspective, it’s a big, big revenue source that is currently going untaxed,” she said. “Voters wouldn’t be too turned off by taxing digital advertising. Nobody likes an ad to pop up when you’re watching a video. And these companies are massive in terms of the revenues being generated.”

Commercial groups and conservative think tanks including the Tax Foundation and the National Taxpayers Union Foundation have warned the states to tread lightly. IAB was part of a group that recently created Marylanders for Tax Fairness, a campaign to oppose the digital advertising tax.

A small group of states including New Mexico, South Dakota and West Virginia already have stretched their sales taxes across a wide range of services, including advertising. Hawaii imposes a general excise tax rather than a sales tax, but it applies to advertising.

Most states, however, either don’t tax services or exempt advertising from sales tax. Florida made headlines in 1987 when it passed a sweeping law taxing television, print and radio advertising. The tax law was repealed within six months in response to a groundswell of confusion and protests from businesses.

A Trip to the Courthouse

Any state taxing digital advertising should expect to be sued, said Richard Pomp, a professor of tax policy at the University of Connecticut School of Law.

On its face, Maryland’s proposed law appears to violate the Internet Tax Freedom Act, which prohibits “discriminatory taxes on electronic commerce.” Without a similar tax on newspapers, televisions and other channels, Pomp said, a court would likely find Maryland’s law violates the federal law.

Tech companies might have valid First Amendment arguments against Maryland’s law. Pomp noted the U.S. Supreme Court considered the impact of taxes on the news media, ruling that industry-specific taxes violate free speech. In addition, Pomp said the tech companies would have valid arguments under the Commerce Clause, which prohibits state laws discriminating against interstate commerce.

“I would expect some bills in 2021, and I would also expect significant opposition,” Pomp said. “And the people fronting for the pushback will have legitimate legal arguments.”

Maryland Attorney General Brian Frosh (D) conducted his own review of H.B. 732 in April and acknowledged the potential for a legal challenge on constitutional and tax freedom grounds. Ultimately Frosh concluded, “while there is some risk a reviewing court would find some provisions of House Bill 732 to be unconstitutional, those provisions are not clearly unconstitutional.”