Pressure is mounting on state legislatures and revenue agencies, before the 2021 tax-filing season begins, to clarify their treatment of benefits added to the federal tax code by coronavirus relief laws enacted last year.

Taxpayers in at least a dozen states are eagerly awaiting guidance or new laws adapting to features of the $2.2 trillion CARES Act, which included a bevy of tax perks to help businesses affected by the pandemic. Taxpayers are also demanding clarity on state tax approaches to the Paycheck Protection Program, created under the CARES Act in March and modified under the $900 billion stimulus and appropriations law enacted at the end of December. Only a handful of states have announced whether they conform to the federal tax rules governing the loan program.

Colorado, Georgia, Hawaii, New York, and North Carolina all took steps last year to decouple from one or more of the federal provisions to shield their budgets from potential revenue losses linked to income tax relief under CARES.

How the other corporate income tax states respond will depend on a variety of factors, including their rules for conforming to the federal tax code and their 2021 budget needs.

“There will be much more guidance from the states, and legislatures will consider these issues as well,” said Eileen Sherr, director of state tax policy and advocacy for the American Institute of CPAs. “It will be interesting to see the revenue positions the states are in, and that will affect how they move forward.”

“I don’t think we’ve had a situation where we’ve had this many federal changes—such important changes—in such quick succession and where state legislatures have had to act so quickly,” said Lindsay LaCava, a tax partner at Baker & McKenzie LLP, during a virtual conference hosted by the American Bar Association’s Tax Section Tuesday.

Debates over conformity to the federal provisions or decoupling from them could be a mere warm-up for the states if the Biden administration succeeds in its ambitious plans for economic recovery and tax reform. Business interests, coordinating as the State Taxes After Reform and Recession (STARR) Partnership, are already preparing to nudge legislatures if new federal tax policies are implemented.

“To the extent Congress makes changes to the tax base and that flows through to the states, we will be evaluating those changes and figuring out what is the right pro-growth message to convey to state legislatures,” said Stephen Kranz, a chief strategist behind STARR and a partner in the Washington office or McDermott Will & Emery LLP. 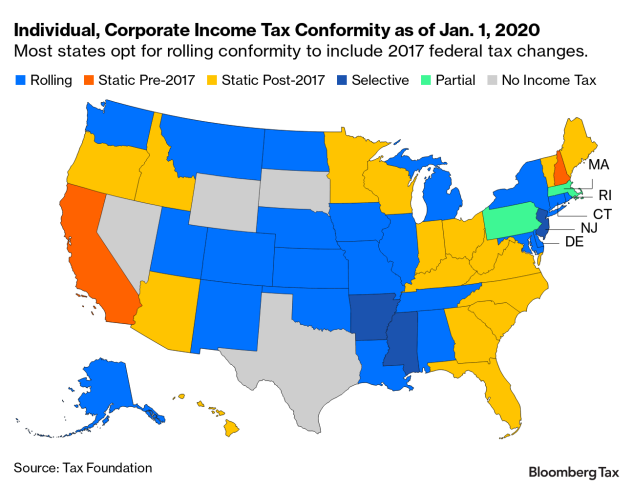 State responses to these and other code changes will be driven by each state’s rules for adopting the federal code, Smith said.

The two dozen “rolling conformity” states, which automatically conform to federal tax changes as they are enacted, must decide to either decouple or accept the tax-cutting measures. “Static conformity” states and “selective conformity states,” which adhere to the federal code during a fixed point in time or on a pick-and-choose basis, must affirmatively adopt the CARES and PPP provisions passed by Congress.

State actions during 2020 legislative sessions were scattershot, hampered by the pandemic and economic uncertainty.

“It was a very piecemeal pattern of conforming or decoupling simply because states either went out of session and couldn’t address it, or if they were in session, they really weren’t sure what these provisions were going to do to their budgets,” Smith said.

Last summer Colorado opted out of the excess business loss, NOL, and business interest deduction provisions, but added the relief measures back into the state code under a bill (H.B. 1002) signed by Colorado Gov. Jared Polis (D) Jan. 21. The Denver Metro Chamber of Commerce lobbied for the policy reversal, saying it would provide “much-needed tax relief for Colorado employers.”

Regarding PPP, AICPA reports 17 states conform to the federal rule specifying that forgiven loans won’t be taxed as income. Only four conform to the new expense deductibility rule.

That leaves a lot of room for action in the remaining states, said Bruce Ely, a state and local tax partner with Bradley, Arant, Boult, Cummings LLP.

“Every state that has an income tax is going to have to revisit these issues in light of the CARES Act” and the December stimulus law, Ely said.

Progressive think tanks such as the Center on Budget and Policy Priorities are encouraging the states to decouple from the CARES Act, pointing to potential tax losses of between $100 million and $400 million in states such as Maryland, Michigan, Montana, Nebraska, and Oregon. Business-focused advocates, including the Tax Foundation, are recommending conformity to the federal code to support businesses impacted by the pandemic and facilitate a smoother economic recovery.

The CARES Act could also cause some states to reconsider the wisdom of rolling conformity and adopt static or selective structures instead during their 2021 legislative sessions.

Many revenue departments were caught off guard by the retroactive features of the CARES Act, permitting taxpayers to file for refunds for tax positions taken in previous years, said Jamie Yesnowitz, a state and local tax leader at Grant Thornton.

“Some states don’t like the fact that revenue impacts from a federal bill can reach back into the state’s coffers for 2018 and 2019. So my sense is you will see states out there reevaluating what it means to be in rolling conformity with the federal code,” Yesnowitz said.

Michael Maserov, a senior fellow at the CBPP, agreed, saying, “this ought to be the nail in the coffin to rolling conformity.”