A dozen states are moving more aggressively against corporate tax avoidance schemes, with strategies to recapture billions of dollars into their tax bases lost through intercompany transfers.

The new strategies could double or triple tax collections from large multistate corporate taxpayers, one economist working with the states believes.

Two states are offering both carrots and sticks to taxpayers. On Aug. 1, North Carolina launched a short-term transfer pricing amnesty program. In April, Indiana kicked off the first and only state-level advance pricing agreement (APA) program, which allows companies and the revenue department to agree on transfer pricing methodologies for future transactions so they can avoid expensive and lengthy legal battles.

The push hopes to curb patterns of tax base erosion that have plagued the states for decades. An analysis by the National Conference of State Legislatures revealed corporate income tax was 9.4% of total state tax collections in 1981, but only 4.8% by 2018. Much of the problem is attributed to savvy companies concentrating high-value assets in subsidiaries.

“Corporate taxpayers are using transfer pricing as a tool for tax planning, and there are significant dollars involved,” said Frank O’Connell, general counsel and director of tax policy at the Georgia Department of Revenue. “Transfer pricing is like any type of valuation. There is a lot of play in what people think is an acceptable range of pricing, but it’s something we can’t ignore.” 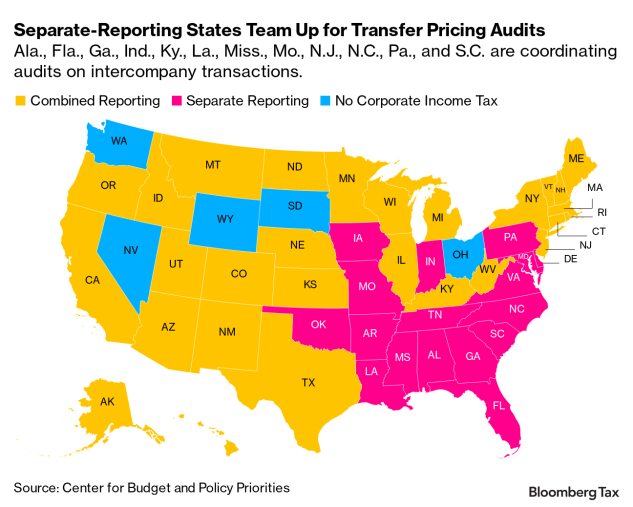 The states are eyeing a sizable gap between the taxable income reported voluntarily by many multistate businesses and income reflective of the “arm’s length standard” for transfer pricing. The standard, enshrined in federal tax code Section 482, specifies parent companies and affiliates must price asset transfers as if the parties weren’t related.

Estimates of the losses are inherently difficult, but some states are likely collecting only a third of what’s actually owed.

“Taxable income from related party transactions would be three times higher if the income was properly reported at arm’s length,” said Ednaldo Silva, a former IRS economist working as a transfer pricing consultant with eight states.

State transfer pricing disputes typically kick up for large multistate companies in the 17 states that require separate tax returns for each affiliate. They treat intercompany transactions as if they occur between unrelated entities. In contrast, 28 states require combined reporting—a single return featuring the income and expenses of parent and affiliates, regardless of location.

Critics of the separate reporting states say their codes leave them vulnerable to tax avoidance.

“There is no great argument for being a separate entity state,” said Richard Pomp, a professor at the University of Connecticut School of Law. “They may as well have a sign on the highway into their state saying ‘welcome to Florida or Indiana, home of voluntary compliance. Pay what you want.’”

The separate-reporting states have adopted various strategies to guard against profit shifting, including their own versions of Section 482. Additionally, the states have adopted laws designed to add back earnings transferred to affiliates. The states often assert discretionary authority to adjust companies’ income higher. In some cases, states require businesses to file returns on a combined basis instead of separately.

Most disputes end in settlements, but three litigated cases in the last several years were landmark losses for states. In 2015, the Indiana Department of Revenue lost cases in the state’s tax court against Rent-A-Center Inc. and Columbia Sportswear USA Corp. The state had taxes and penalties of $513,272 from Rent-A-Center, and $948,369 from Columbia.

In a widely watched 2018 case, the Utah Supreme Court found the state’s tax commission had improperly disregarded a transfer pricing analysis by See’s Candies in litigation that sought $320,612 in taxes and penalties.

In all three cases the courts agreed the revenue agencies had misused their discretionary authorities to reallocate the taxpayer’s income.

The current framework for state coordination grew from a 2015 initiative by the Multistate Tax Commission. The participating states sought to share information and train audit teams to dispute corporations’ transfer pricing studies.

Several of those states have significantly upped their audit games in the last three years by hiring Silva, who maintains the royalty rate database RoyaltyStat LLC. Silva offers training, audit support services, and access to his database. With each engagement, Silva helps state revenue departments see through what he calls “economic nonsense” embedded in some corporate returns.

“Without exception, every state I have been working with has attained the human capacity to review and analyze transfer pricing reports produced by taxpayers. And they have the ability to make adjustments that are defensible,” Silva said.

The role he and other outside contractors are playing in state transfer pricing audits is raising the hackles of some corporate taxpayers worried about the motivations and the tactics of tax “bounty hunters.”

“The fact that states are engaged in discussions and it potentially involves sharing information with a third party contractor, who may be operating as a bounty hunter, is extremely concerning and raises taxpayer confidentiality concerns,” said Stephen Kranz, a tax partner in the Washington office of McDermott, Will & Emery. “As those provisions are quite rigorous, I hope the states involved in the discussions are following those provisions.”

Indiana has taken the additional step of offering taxpayers an opportunity for transfer pricing clarity and freedom from audit under its APA program, which mirrors the IRS’ long-standing model for resolving complex international transfer pricing issues.

Over the years a handful of states have negotiated “go forward agreements” at the end of audits, said Joe Garrett, managing director of the multistate tax group at Deloitte Tax LLP. But Indiana is the first state to invite taxpayers to resolve transfer pricing issues cooperatively.

Garrett and other practitioners are encouraged by the APA initiative.

“If Indiana can get a few APAs signed and if it works out well, I could see other states going after this type of program,” said Elizabeth Hazzard, global transfer pricing director at BKD CPAs & Advisors in St. Louis.

North Carolina launched a different kind of program Aug. 1 with its Voluntary Corporate Transfer Pricing Resolution Initiative. Over the next four months companies will be able to negotiate a settlement with the department and pay outstanding taxes with a waiver of penalties.

The program, however, might signify a period of calm before a new pattern of enforcement, cautioned William W. Nelson, a tax partner with Smith Anderson in Raleigh, N.C.

“If I were a corporate tax director, I would be concerned they are going to launch a big initiative,” Nelson said. “So it’s something I would look at very hard. I’m expecting to get some calls from businesses trying to weigh the pros and cons.”