The $1.9 trillion stimulus plan comes with federal tax relief for those who lost their jobs during the pandemic, but the path to getting similar relief from state taxes won’t be that simple for many.

The package, signed into law by President Joe Biden Thursday, allows individuals to exempt $10,200 in unemployment benefits from their federal taxes—a change that creates complications for state tax agencies that will need to decide whether and how to adopt the change mid-filing season.

Those that conform will have to figure out how to get the relief to individuals who already filed, while also potentially coping with the loss of billions of dollars in tax revenue. Those that don’t risk confusing taxpayers who may unwittingly underpay their state taxes because they don’t realize the benefit only applies at the federal level. They’d also be blocking aid to millions of individuals at a time when it’s needed most—about 40 million Americans received unemployment benefits in 2020.

“The exclusion of $10,200 of unemployment compensation from federal taxation creates incredible complexity and uncertainty at the state level,” said Jared Walczak, vice president of state projects with the center for state tax policy at the Tax Foundation.

State tax administrators are studying the more than 600-page relief bill to understand the federal changes so they can decide how to proceed, while they await further guidance from the Internal Revenue Service.

“We don’t know how we’re going to interpret something that we don’t actually have the language for until now,” said John Valentine, Utah tax commissioner and president of the Federation of Tax Administrators. “We’re going through a bunch of those trying to determine what is the effect on our system. We don’t have it all worked out yet, we just haven’t been able to do that.” 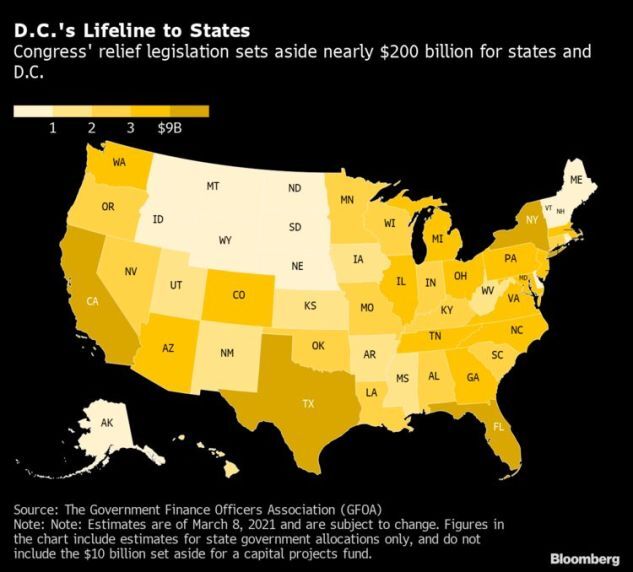 About two dozen stateshave what is commonly known as “rolling conformity,” which means they automatically adopt any changes to the federal tax law. So those that tax unemployment compensation—which includes most states with an income tax—will conform to the recent pandemic relief, unless they take action against it, he said.

Conforming states have to figure how to adjust their tax software, forms, and instructions at the height of the filing season, and decide how best to get the aid into the hands of individuals, especially those who have already filed returns and paid taxes on unemployment compensation that is now exempt. Almost 56 million federal tax returns had already been filed as of March 5, according to IRS data.

Valentine said it would be problematic to change programming midstream. Utah, which is a rolling conformity state, has chosen to make everyone who wants to claim the unemployment compensation tax benefit file an amended return and get a refund that way, he said.

“Making this extension is important for the states from a logistical standpoint that they need to change their forms,” said Jamie Yesnowitz, a state and local tax expert for Grant Thornton’s Washington National Tax Office. “So Maryland is stepping out aggressively to say, ‘OK, we want to get ahead of this issue.’”

It would be complicated for states to create a method for automatically sending refunds to individuals who overpaid—without any additional filing requirements—because individuals can have unemployment compensation from multiple states, Walczak noted.

That means taxpayers with 2020 unemployment income, many of whom may still be out of work, will have to wait a while before seeing the money from the new Covid-19 relief. And amending returns often comes with a cost.

“They’re going to have to prepare another return or pay someone else to do it,” said Lowery. “That’s problematic for them. These are folks who are unemployed. I doubt that they have a lot of income. It’s not a good situation from that perspective. The timing is just terrible.”

Conforming states will also likely see a big hit to tax revenue as a result of the new pandemic relief.

Walczak said unemployment compensation benefits, in 2020 alone, would be responsible for about $12 billion worth of state income tax collections in the 35 states that impose taxes on unemployment benefits. He said exempting $10,200 for some individuals could make a substantial cut into that total.

“We could be talking about a good deal of money,” said Richard C. Auxier, a senior policy associate in the Urban-Brookings Tax Policy Center who focuses on state and local tax policy, budgets, and other finance issues.

“And in states that are cash strapped, they are going to have to decide if they want to make this a part of their code, just on the revenue question alone,” he said.

States that don’t automatically conform federal tax changes will have their own share of problems, experts said.

They’ll also have to consider revising tax forms and instructions, but for a different reason. People may not realize that while they can exempt the $10,200 in unemployment compensation for federal tax purposes, they have to add it back in for their state taxes, Walczak said.

So states will want to figure out how to make that clear so that people don’t underpay at the state level, he said.

Regardless of whether states conform or not, education is going to be crucial in this last half of the filing season.

“There are so many moving parts here that it’s going to be really important for everyone to be communicative and helping people understand,” Auxier said.

‘Terrified’ to Do Taxes

Confusion is creating new anxiety for taxpayers, adding to an already-stressful time for many.

Julie Pai, 46, a food service worker who used to work over 60 hours a week at her two jobs at John F. Kennedy International Airport, has been unemployed for over a year. She has depleted her savings account and has accrued massive credit card debt of $16,000. And despite having taxes withheld from her weekly unemployment checks, she still owes $1,650 in state taxes.

“This rescue plan completely left out those single, no children, middle-class unemployed people,” Pai said. “The government left us behind when we needed help.”

Stephanie Freed, 32, who lost her job as a production electrician assistant helping put on shows for Snoop Dogg and Flo Rida and New York Fashion Week, has been co-director of ExtendPUA, a group lobbying for stronger unemployment benefits and federal tax relief for the city’s entertainment industry.

It remains unclear whether New York will consider applying changes as lawmakers negotiate a budget deal ahead of April 1, leaving unemployed state residents in financial limbo with many owing thousands of dollars.

“I personally have not done my taxes yet because I’m terrified,” Freed said. “People don’t have the energy or the mental bandwidth at this moment to deal with all of this.”

To contact the reporters on this story: at dborak@bloombergindustry.com; in Washington at aversprille@bloombergtax.com