The city of Tampa, once planning for a financial bonanza from hosting this Sunday’s Super Bowl, is still hopeful for a healthy economic kick from the big game despite coronavirus limitations.

While local officials and economists say they’re optimistic about this year’s matchup between the Kansas City Chiefs and Tampa Bay Buccaneers, there’s no telling how much a Super Bowl will generate when it’s in a pandemic and half the game’s following is local.

In pre-pandemic times, cities stood to add $100 million in taxable sales and could see anywhere from $30 million to $130 million in economic impact from hosting the big game, according to Victor Matheson, a sports economics professor at Massachusetts-based College of the Holy Cross. Matheson usually estimates a host city’s economic gain, but said there are too many unknowns to do so this year.

Tampa, the first city to host a Super Bowl for its home team, has been “steadfast in hosting this year,” said Santiago Corrada, president and CEO of Visit Tampa Bay. During normal times it’s hard to predict revenue, but “we’re in uncharted waters now,” he said.

Last time Tampa hosted the Super Bowl, in 2009, the local county’s hotel occupancy for that weekend shot up 51.7% compared with the same weekend a year earlier, according to numbers from Visit Tampa Bay.

Like the rest of the country, Tampa could use a revenue boost. Hillsborough County, where the Buccaneers’ stadium is, was down over $80 million in sales taxesbetween March and October 2020 compared with the same period in 2019.

Florida—one of just two states that doesn’t impose taxes on online sales—had an 8.3% decline in sales tax revenue from March to December 2020 compared with the same period in 2019, according to Lucy Dadayan, senior research associate at the Urban-Brookings Tax Policy Center. 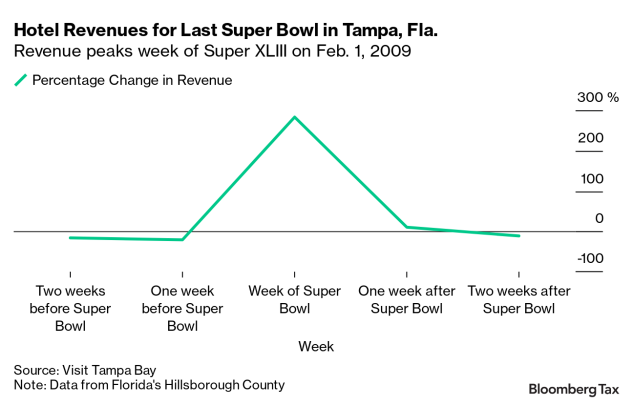 “We won’t see as many flights coming in,” said Rob Rosner, the city’s director of economic opportunity. The pandemic has hurt all industries, especially the hospitality sector in Tampa, Florida’s third-largest city and home to the Raymond James Stadium, where the Super Bowl is scheduled to take place Sunday.

“This will give us at least a short-term boost of high activity,” he said.

Hotel revenue makes up a sizable portion of the money host cities can make. Typically it spikes in the days leading up to the big game as rooms sell out and prices skyrocket.

Tampa’s hotel occupancy has fluttered around 50% during the pandemic, the only top-25 market to do so, although that number is still almost 30% less than 2019, according to data analysis firm STR.

While Hillsborough County’s 6% “bed tax” by no means carries the economy, hotel profit is a good metric for the many tentacles of the city’s economy at large, including food, beverage, entertainment, and other taxes tied to travel, Corrada said.

In 2017, Super Bowl LI’s host city, Houston, saw hotel occupancy rates shoot up to roughly 95%, and monthly hotel revenue was nearly $39 million above what would have been expected if the city didn’t host, according to Matheson.

Houston’s numbers won’t be repeated, as just one fan base is traveling from outside the host region. And with social distancing protocols, just 25,000 fans will be in attendance—about a third of the stadium’s capacity.

“If we saw anywhere between 80% and 90% occupancy average for those days leading up to Super Bowl LV it would be like things are back to normal, even a little bit better than normal,” Corrada said.

With hotels well below usual occupancy, most of the the free room blocks and conference centers designated for the NFL and its staff wouldn’t otherwise have been used by paying guests.

“Even getting 70% capacity into the hotels would be a huge increase compared to where the county is now, “Matheson said.