Detailed view of a dartboard with darts on during day one of the PDC Players Darts Championship at Butlins Resort on Nov. 22, 2019, in Minehead, England.
Photographer: Harry Trump/Getty Images

TurboTax’s groundbreaking free do-it-yourself offer for simple tax returns forced competitors to level up, says DiGo’s Mark DiMassimo, but its most recent advertising campaign theme has caught the FTC’s eye. Now the FTC is suing TurboTax, which could face tens of millions of dollars in fees and fines.

Intuit’s TurboTax was winning the battle for leadership of the tax services category.

Not long ago, it was considered a tech-led challenger to brick and mortar behemoths such as H&R Block, Liberty Tax, and Jackson Hewitt. In recent years, the company quickly became a dominating force in the category. In the final quarter of the 2020 fiscal year, Intuit posted 83% revenue growth as the pandemic forced many Americans to file their taxes at home.

Meanwhile, market leader H&R Block has put itself through torments to appear high-tech, even minting a partnership with IBM’s Watson division and making this fact the centerpiece of tax season advertising.

It remained difficult for consumers to predict when a tax return crossed the threshold from “simple” to “not simple.” The answer depended on the questions required to fill out a tax return. Many consumers who started expecting “free” ended up paying fees. Most didn’t complain.

All of this was working well for TurboTax, which could afford to add lucrative services. For example, TurboTax worked well for clients who wanted a more personal touch or needed a higher level of expert advice, while essentially running with the economics of a software company. The money that they weren’t spending on overhead, real estate, franchise marketing, and tax preparers, they plowed into advertising, dominating the tax season in recent years with hundreds of millions of dollars’ worth of catchy ads.

Like a boa constrictor wrapped around its dinner, TurboTax had the rest of the tax services industry in a vice grip. All that was necessary was to continue pressing the advantages of TurboTax’s business model and marketing strategies.

“Free” was always a qualified truth. It wasn’t unqualified freeness that could fairly be expressed unconditionally in a regulated industry. It was free with conditions. Free with limits. Free*.

But TurboTax seems to have decided that if “free*” was good, then “free, free, free” would be a lot better. That was their most recent advertising campaign theme, and it was catchy. In fact, it caught the attention of the newly invigorated investigators and regulators at the FTC.

The FTC is suing TurboTax, which could face tens of millions of dollars in fees and fines. According to the FTC: “As detailed in the complaint, Intuit engaged in a years-long marketing campaign centered on the promise of ‘free’ services. These ads have run during major events, including the Super Bowl, and have also aired during this year’s NCAA Basketball Tournament. In spite of this advertising, many consumers who took the time to gather their documents, entrust their personal information to Intuit, and begin the filing process found that they could not file their taxes for free. For example, in at least one ad a disclaimer appeared on the screen while an announcer said ‘That’s right, TurboTax Free is free. Free, free free free.’”

The FTC claims it’s a bait and switch because most users get charged when they file. Cornell Law School’s Legal Information Institute defines bait and switch in this way:

Bait and switch is deceptive and wrong but becomes common in marketplaces with lax regulation. Many other companies have been targeted by regulators for bait and switch tactics in recent years, including Dell, Aldi, and Zara.

Left and right are often caricatured as pro-regulation and no regulation. Still, the truth is that for most savvy business people, the argument is over the degree and focus of regulation rather than about the necessity of regulation itself. Most agree that a stable legal system and regulatory environment are necessary for fair and competitive markets. Regulation ebbs and flows with changing administrations and the budgets and priorities assigned to government agencies. While there is much argument about how much regulation is best, there is little argument that, under the Biden administration, the FTC is more active in enforcement related to commercial practices.

New statistical evidence shows that—at least in the long run—the marketplace punishes unhelpful companies and rewards those that help consumers achieve personal goals. Over time, the companies positively affecting our mental and behavioral health are rewarded with growth and profits, while those perceived to have a negative effect are punished. These are early findings of the Brand Positivity Index study that DiGo and Market Theory have been fielding for the past year. Early results show that brands perceived to affect our behavioral health negatively must spend much more to grow market share than those seen as having a positive impact.

The Positive Behavior Change Index tracks 2,786 brands across 130 categories, including the top 12 public brands in the tax services category. It shows that brands that are perceived to help consumers achieve goals that are important to them can grow market share much more efficiently than their less helpful peers. 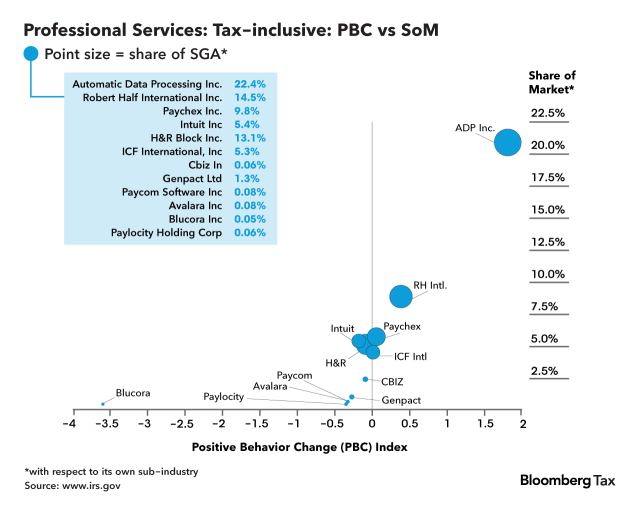 As you can see from the chart above, TurboTax is now neck-and-neck with H&R Block, and both companies have a slightly negative Brand Performance Score, meaning that they each have to spend a little more than the average company in the tax services category to gain a point of market share.

TurboTax had been growing market share the right way—by empowering consumers to do it themselves and save time and money—but there’s evidence that consumers no longer see the company that way. And this is not the first time the company has seemed to slip into abusive marketing practices. As recently as 2019, the company was accused of hiding its legally mandated free option for public search engines.

Tax pros and tax service providers serve as essential financial advisers to tens of millions of Americans. For many people, their tax adviser is the only financial adviser they will have. Consumers are still rewarding independents over the big brands and are seemingly not seeing much differentiation between the biggest tax services companies. This is an opportunity for a large tax services company to dedicate itself to helping those it serves to achieve their financial goals, or at least to have a straightforward, simple, honest, helpful, and accurate tax offering.

Marketing the value added by professional tax advice and service may not bring in the volume that deceptive promises of “free” do. However, quality relationships are much more valuable over time.

Every independent and challenger in the tax service category on a mission to do better for the client should view this news as a shot in the arm.

Mark DiMassimo is the founder and creative chief of DiGo (DiMassimo Goldstein), an agency in positive behavior change marketing, which he founded in 1996 in New York City.