A U.K. tax case could alter how does business across Europe and put pressure on the country’s tax authority to retroactively collect up to 1.5 billion pounds in value-added taxes.

In the U.K. and much of the European Union, Uber for tax purposes is considered an intermediary platform that connects self-employed drivers to clients. That means drivers are responsible for collecting VAT, but most rides end up not getting taxed. Maugham wants the U.K. to reclassify Uber as a transportation provider—which a European Union court in 2017 found it was, in a case from Spain—and make it responsible for collecting the U.K.'s 20 percent VAT from riders.

Maugham is asking the U.K.’s high court to order the release of HMRC’s assessment on Uber’s VAT liability. Supporters could use that information to push for harsher tax treatment of the ride-hailing app. Uber, however, has appealed the release of the assessment, leaving the case in limbo.

The case illustrates the increasing pressure that gig economy companies are facing from regulators and the public, exacerbated by Uber’s plummeting bookings during the coronavirus epidemic and London regulators’ move in November not to renew the company’s license. A successful challenge could encourage authorities across Europe to continue their broader crackdown on Uber, upending the ridesharing app’s business model from how it collects taxes to what labor regulations it has to follow.

If the U.K. case against Uber fails, it may prompt EU lawmakers to write VAT rules that would cover such platforms, Marique said. And if it succeeds, they may think about how to apply the same concepts to other platforms as well, he said.

In the U.K., the annual income threshold for self-employed individuals to be liable to pay VAT is high, at 85,000 pounds ($110,000), meaning most transactions on Uber’s platform in the country aren’t taxed.

“This is a massive erosion of the tax base,” said Richard Asquith, vice president of global indirect tax at tax software firm Avalara Inc.. “There is billions of new economic activity which because of the faults of the tax regime goes untaxed.”

Uber, in a statement, said it “fulfills all its tax obligations in the UK and in any other country in line with local and international tax regulations.”

But the business models for many gig-economy platforms, such as Uber, are rife with tensions, Maugham said.

“At the same time as you are pretending to be an intermediary broker, between the customer and the supplier, you are also facing the public as offering a service yourself,” he said. 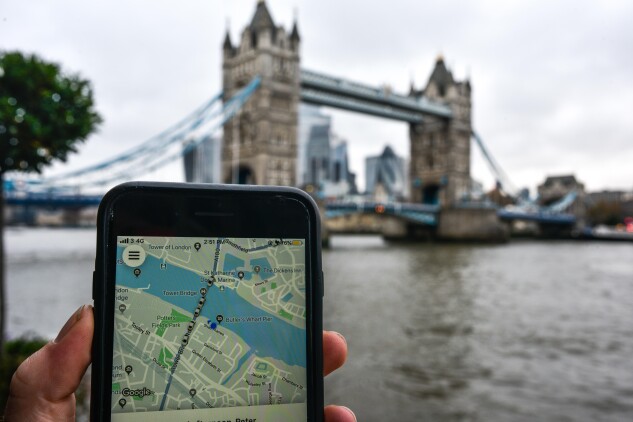 The Uber app is displayed on a phone in front of Tower Bridge in London.
(Photo by Peter Summers/Getty Images)

Figuring out how to tax services offered by digital platforms such as Uber, Deliveroo, and Airbnb Inc. can be complicated. EU members follow bloc-level VAT directives but are responsible for categorizing the type of business and determining whether their transactions are liable for VAT along with tax rates and thresholds.

“European VAT relies on categories,” said Giorgio Beretta, a tax law researcher who wrote a book about VAT and the sharing economy. “But the problem is that it’s not so clear in the sharing economy who is supplying what to whom.”

That has led to fights over how to classify gig economy platforms.

Countries are increasingly pushing to categorize those platforms as services providers. For example, a French tourism agency last year tried to argue that Airbnb was a real estate broker, but the European Union’s high court disagreed.

Uber argues it provides the technology to connect thousands of self-employed drivers—independent contractors—to clients. But a 2017 EU court in a case brought by Barcelona taxi drivers against Uber found that the ride sharing platform was a taxi company, opening the company up to new regulations. And in 2018, the court ruled against the company in a French case prohibiting services using unlicensed drivers.

“The problem is how far regulators will go,” said Aitor Ortiz, a litigation analyst with Bloomberg Intelligence. “One country is not a big deal, two countries are not a big deal. But if many countries are treating drivers as employees, in the end it makes it a difficult business to sustain in the long term.”

In the U.K., which still applies EU VAT law, Uber indicated in its October accounts statements that the company was involved in “ongoing dialog with HMRC, which is seeking to classify the Uber Group as a transportation provider.” Should Uber be considered a taxi company, it would either be required to pay VAT on its gross bookings or on the services fees Uber charges drivers.

Should Uber be responsible for paying its own VAT, Maugham argued, the company would likely increase fares for customers or cut drivers’ earnings. He estimated the company would probably have to pay up to 1.5 billion pounds in back payments for failing to charge VAT during its eight years operating in the U.K.

“Personally, I don’t think it overstates the situation to say Uber’s business model does hang on this case,” said Richard Murphy, professor of practice in international political economy at City University of London.Most of the company’s profit margin could disappear if it was liable for VAT, even though VAT is passed on to consumers, because it may have to lower its prices and absorb some of the cost itself, he said.

“My gut reaction is that Uber have very little chance of winning,” he said. Murphy said he is an acquaintance of Maugham’s and had discussed the case with him before he initiated it.

Meanwhile, in recent years, national and international regulators have started to study how to better regulate and tax sharing economy platforms.

The OECD in 2019 published a paper considering several VAT collection models for online platforms. In one model, called the “full VAT/GST liability regime,” platforms would be solely responsible for assessing and collecting VAT on sales they facilitate.

In its draft proposal, released Feb. 19, the OECD called for standardizing how the gig economy is taxed and proposed definitions of which platforms, services, and sellers would be subject to the rules. It also outlined specific data that companies would need to collect, such as information about sellers.

While the EU has not yet proposed any specific VAT regulations for the sharing economy, the European Commission’s Taxation and Customs Union directorate is involved in discussions with the OECD about its work. In January, Austria’s government implemented rules requiring online booking platforms to document and provide all relevant tax information to the country’s tax authorities upon request.

Separately, the U.K. is considering using withholding taxes to reduce tax-filing errors or under-reporting by self-employed individuals. HMRC said March 23 it continues to work on a model for a VAT “split method.” Under this method, a bank or payment intermediary would withhold part of the VAT required by a self-employed taxpayer.

“In the future, I think lawmakers will change the shape of rules and assign responsibilities and duties to platforms and marketplaces,” said Alan Rhode, a tax adviser for Ecommerce Europe. The group represents more than 20 e-commerce associations that total more than 100,000 companies selling goods and services online to European consumers.

“The trend everywhere in the next three, five, 10 years, will be to make platforms more responsible for tax compliance for purchases,” he said.

—With assistance from Isabel Gottlieb.

To contact the reporter on this story: Meg Bernhard in Brussels at correspondents@bloomberglaw.com