It’s just about a year since the U.S. Supreme Court ruled on what many tax professionals have deemed the “tax case of the millennium,” but legal challenges may start arising soon as state online sales tax programs get underway in earnest.

Since the high court swung the door open for states to tax online sales with its June 21, 2018, South Dakota v. Wayfair ruling, almost every sales-tax state has adopted a policy designed to reap new revenue.

True revenue figures might still be out of reach, but lawyers think states will have more to worry about than just reaching original projections.

Responding to the high court’s ruling—which effectively let states require out-of-state sellers to collect online sales tax—states have undertaken several approaches targeting both individual vendors and marketplaces like Amazon.com Inc. and Etsy Inc, some of which practitioners believe are more vulnerable to litigation than others.

“The ruling will have lasting state consequences for a long time, but we are starting to understand what these implications could look like in the one-to-three year range,” said Brian Kirkell, a principal at RSM US LLP in Washington. “There are multiple scenarios that could lead to legal challenges for states.”

Editor’s Note: This piece is one in a series of articles centered on the one-year anniversary of the Wayfair ruling.

Jennifer Weidler Karpchuk, a senior counsel at Chamberlain Hrdlicka in Philadelphia, hasn’t seen a post-Wayfair caseload yet, but she is certain that will change.

“We will absolutely see Wayfair-related cases in the next year,” she said. “Many businesses still don’t understand the real reach of the ruling and aren’t aware of their new compliance duties.”

Beyond seller confusion, there are other reasons to expect a surge in future cases, according to Kirkell, who said that actions of some of the thousands of middle-market companies could identify how much in owed sales tax a state is willing to forgo.

Here’s Kirkell’s example: Imagine a middle-market specialty pencil company that does $30 million a year in gross sales. This company does business in every state and triggers collection laws in several. The sales tax owed to these states only amounts to $2,000 or $3,000, but compliance would cost the company tens of thousands of dollars in infrastructure.

So the company sticks its head in the sand and refuses to collect and pay the sales tax, instead deciding only to pay if the state performs an audit, which would be cheaper than standard compliance. But now the state faces a decision of its own—is it worth the administrative resources to conduct an audit on only a few thousand dollars of owed sales tax?

“This scenario, which will play out a lot over the next few years, could give a new definition to the amount of owed sales tax a state is willing to pursue,” Kirkell said.

Immediately following the ruling—which tossed out the court’s 1992 physical presence standard affirmed in Quill Corp. v. North Dakota that limited the ability of states to tax remote sales—a flurry of states rushed to enact laws, a majority of them mirroring South Dakota’s original model of $100,000 in annual sales or 200 transactions in a year.

A year after the ruling, nearly every state that has a sales tax has moved to enact a remote sales tax law. 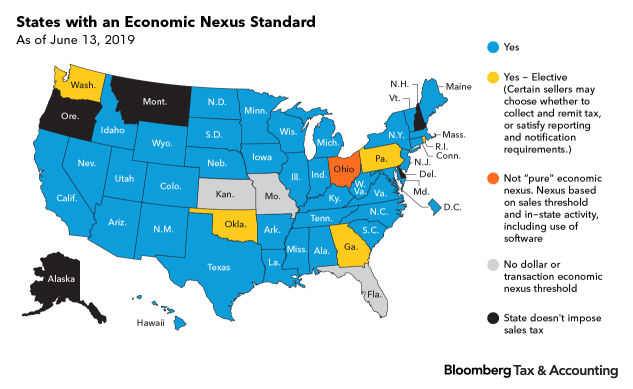 Richard Cram, director of the Multistate Tax Commission’s National Nexus Program, said that over two-thirds of states could have laws in place by summer’s end. He singled out Ohio, Michigan, North Carolina, Massachusetts, and Maine as those most primed to enact proposals. 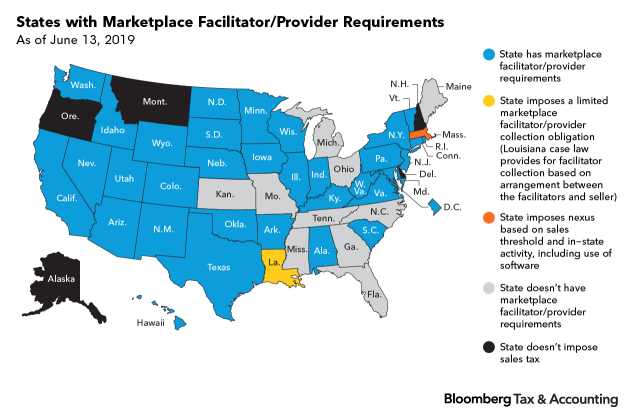 Cram said states could run into a problem in the coming year concerning marketplace facilitator definitions, which he says are currently too broad.

“States wanted to initially cast a wide net to catch as many fish as they could,” he said. “They would then release the fish that weren’t supposed to be caught, meaning relieving some of these accused marketplaces of their compliance duty.”

Cram worries that some states might not have the administrative bandwidth to investigate every complaint a company files, and a lack of attention could lead to lawsuits down the line.

The evolution of remote sales tax laws has been rapid. In the months after states moved swiftly to enact trigger-based laws, they were backtracking, eliminating one of the two key measures used to determine which out-of-state vendors have to collect sales tax—the number of transactions per year.

Under the amended laws, sellers wouldn’t have to worry about triggering a transactions threshold by making, for example, 200 separate transactions for $1 each. An annual monetary threshold applies instead.

What started as a few states—first California, Colorado, North Dakota, and South Carolina—quickly grew to over a dozen. Practitioners believed states were eliminating their transaction thresholds both to partially alleviate the state’s administrative burden and to provide a larger safety net to sellers.

States are nowhere near a slowing point, Kirkell said.

“I believe this policy will be adopted across the board in the coming year,” he said. “Expect more states to drop transaction thresholds and increase their dollar threshold figure.”

Real Revenue: Too Soon to Tell

Whether Wayfair has been the revenue bonanza that many states anticipated remains unclear, and the question may not be answered for some time.

During the post-Quill/pre-Wayfair era, states frequently pointed to 2009 research from the University of Tennessee that estimated “annual national state and local sales tax losses on e-commerce will grow to $11.4 billion by 2012 for a six-year total loss of $52 billion.”

With the taxation dispute settled, however, the same researchers have been reluctant to characterize the revenue from Wayfair-inspired statutes flowing into state and local coffers.

“This will be a difficult undertaking, as I don’t think state revenue departments differentiate remote vs. in-state sources of sales tax revenues in their public releases,” said Donald Bruce, one of the Tennessee economists who authored the original research. “I also don’t think it will be easy to get differentiated data from those agencies.”

The only significant academic examination of revenue resulting from Wayfair, focusing primarily on Indiana, suggests a shallow stream rather than a river of new revenue.

Indiana University economists John L. Mikesell and Justin M. Ross concluded early evidence of state remote seller laws “suggests the impact of Wayfair will not be to provide a means of rectifying significant fiscal fortunes, but may be a nice token boost to an important source of revenue for the states.”

—With assistance from Tripp Baltz and Michael J. Bologna.