The Bronx Tavern is located in the Port Morris neighborhood of the Bronx in New York. New York is among the states where officials said they would consider expanding opportunity zone tracts, but need to see Treasury guidance first.
Photographer: David 'Dee' Delgado/Bloomberg via Getty Images

Investors across the country have been asking state officials to expand the areas designated for the 2017 tax law’s opportunity zone tax breaks—and changes related to the 2020 Census may give those investors a new chance to get what they ask for.

The Census Bureau is revising census tract boundaries, potentially giving state governments the ability to cover more of their states in opportunity zones, nearly two years after they requested a limited number of census tracts for the incentive in the wake of the tax law’s passage. Such expansions would provide investors with additional options for projects that take advantage of the popular tax breaks, which allow those with profits from stocks and other investments to defer and reduce their capital gains tax liabilities.

Working with state and local officials, the bureau will expand, shrink, or split some census tracts where populations have gotten too large or small for the tracts to be valid, to update its map for 2020 data collection. The Treasury Department must decide how to address how this will affect the tax incentives—for which nearly 9,000 census tracts have been chosen—on a national level.

Extending the tax incentives to additional land that an opportunity zone tract gains as a result of the Census Bureau revisions would “further the goals of the opportunity zone legislation,” a Treasury spokesperson said.

A handful of states say they’d consider such expansions, if Treasury decides to allow it.

Treasury may also have to grandfather in projects within tracts that shrink, telling investors that they can rely on the old boundaries, the spokesperson added. The Treasury Department’s Community Development Financial Institutions Fund website states that the zone designations were based on boundaries at the time they were chosen, and that they don’t change even if the census tracts are later redefined.

“I always presumed the lines were drawn in stone,” said Mike Novogradac, managing partner of Novogradac & Co. LLP, an accounting and advisory firm that focuses on real estate and affordable housing. “The question just becomes, does the IRS think something different?” 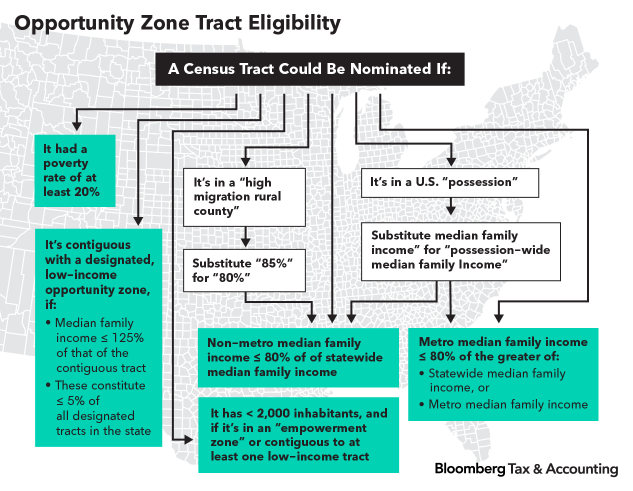 What the States Say

States could only request that the Treasury Department approve up to a quarter of their low-income census tracts for the tax breaks back when they were officially designated in the spring of 2018. States with fewer than 100 low-income tracts could designate 25.

The Census Bureau initiative—called the Participant Statistical Areas Program (PSAP)—allows states, territories and municipalities to request census tract boundary updates for tracts in which populations have risen above 8,000 people or fallen below 1,200. The bureau will release its decisions based on those requests early next year.

Puerto Rico—which, due to the 2018 Bipartisan Budget Act, isn’t subject to the cap on low-income tract designations—got two additional tracts made opportunity zones in June based on more recent income data. The island government additionally requested Treasury’s approval of the expansion of an already-designated census tract, Puerto Rican government officials and the Treasury spokesperson confirmed. To back up this request, they said, the Puerto Rican government cited tract boundary changes that had been requested as part of PSAP, the Census Bureau program that makes changes to tract lines.

Some state officials and government spokespeople—in Alabama; Iowa; Washington, D.C.; Louisiana; and New York—said they didn’t know if they would consider seeking opportunity zone tract expansions based on the bureau program, and would have to see Treasury guidance first. A Tennessee state government spokesperson said the state wouldn’t rule it out.

“If we could do that, we probably would take a look at it,” said James Leiman, director of economic development and finance at North Dakota’s Department of Commerce. “I think what we would do here is study the impact.”

Officials from 17 states said individuals and businesses have lobbied their governments to extend the federal incentives to them if the tax breaks aren’t already available based on the previously designated zones.

And it’s no wonder there’s a push for more, as the perks may be substantial. Investors can delay tax on profits from stocks, real estate, and other investments through 2026, and shield 10% of those gains from tax if they hold the investment for five years. If they hold it for a decade, any appreciation of the underlying project is tax-free.

“There are plenty of people who are actively today begging to have things changed,” said Shawn Bertini, director of technology at Four Points Funding LLC, a venture capital and real estate investment firm that targets projects and startups in rural Colorado.

It’s unclear how many chances for new opportunity zone space may arise, as the chosen zones tend to be clustered. More than four in five opportunity zones are contiguous with other zones, according to an analysis by the Economic Innovation Group, which researches and lobbies on the tax incentives.

And multiple officials raised a big question that would accompany any extension of the tax-advantaged tracts.

A tract counts as “low-income” if its poverty rate is at least 20% or its median income is up to 80% of the state- or metro-wide median income—whichever of those two is larger—among other factors. The areas’ income and poverty rates were based on the bureau’s American Communities Survey from between 2011 and 2015 or between 2012 and 2016, even while their lines were based on 2010 census boundaries.

If a tract grows and sees an influx of new people into its population and that population becomes wealthier, that might make it no longer “low-income,” and could throw off the tract’s eligibility.

The same could be true if an expanded tract’s eligibility for the tax breaks depends on newer income and poverty statistics.

“If Puerto Rico or a state tries to change their OZ boundaries, what data are they using to see if the addition even qualifies?” Mark Ritchie, chief of the Hawaii Department of Business, Economic Development & Tourism’s Business Support Branch, said in an email.