Nina Olson, U.S. Taxpayer Advocate, stands for a photograph in Washington on July 26, 2011. Olson, a lawyer and former tax preparer, has held the position since March 2001 and has become one of the leading critics of the IRS' treatment of taxpayers.
Photographer: Christopher Powers/Bloomberg via Getty Images

“Not a team player.” “A thorn in the government’s side.” “The voice of the taxpayer.”

Outgoing National Taxpayer Advocate Nina E. Olson has been called many things, and she bears those titles—both the good and the bad—proudly.

Olson, who retires as head of the Taxpayer Advocate Service July 31 after 18 years, is no stranger to controversy. Her role—part of an independent arm of the Internal Revenue Service where taxpayers can turn for help if they have a dispute with the agency—has naturally pitted her against senior IRS leadership occasionally.

But looking back at her time in the government, Olson wouldn’t change her approach. And Congress, which created the role to act as an independent voice for the American taxpayer, might have something to say about it if her successor feels otherwise.

“The next person may have a different style,” she told Bloomberg Tax in a sitdown interview. “But they will still need to advocate zealously.”

Olson spoke about the sometimes-contentious relationship in her last public speaking engagement as the national advocate. She talked about backlash she faced after going public with concerns about the agency’s implementation of the 2017 tax law’s repatriation tax—a one-time levy on accumulated offshore earnings. The move resulted in her being criticized by some within the IRS for not being a “team player,” Olson said in the June 21 remarks.

Mark Everson, who as a former IRS commissioner could at times find himself opposite of Olson in a disagreement, said he always admired her commitment to principle. But it’s open to debate whether a person in her role could get as much—or more—done by working more with the IRS internally before bringing an issue to the attention of lawmakers or the public, he said.

Olson contends that is exactly what she did—exhaust her options within the agency and then, if that didn’t work, pursue other avenues.

The IRS said July 19 that it didn’t have any update on Olson’s replacement. 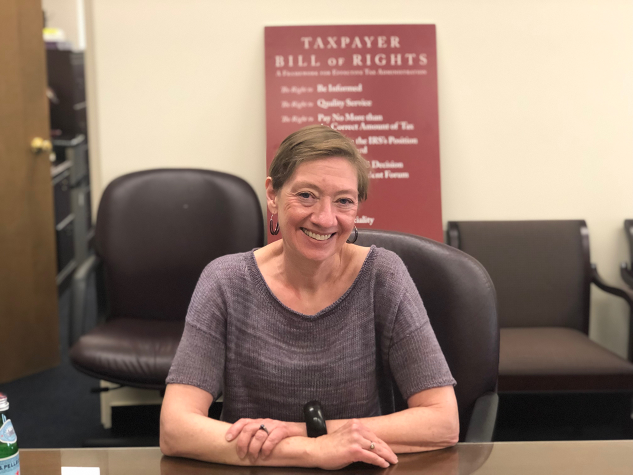 Nina E. Olson has spent almost two decades as the National Taxpayer Advocate and shaped the office into what it is today.
Photographer: Allyson Versprille

Olson reminisced about one of her first major battles with IRS leadership over the implementation of the federal payment levy program, which allows the agency to seize a portion of payments taxpayers receive from the government if they have unpaid tax debts.

She said when she arrived at the Taxpayer Advocate Service in 2001, the IRS was talking about imposing a 15% levy against Social Security recipients. Olson, who had in the private sector represented the types of elderly low-income individuals who would be adversely affected by this program, questioned whether the agency was going to protect people below a certain income level from being hit with the levy.

“Everybody just blinked at me,” she said, noting that senior agency officials and the head of the Treasury Department’s Financial Management Service—now the Bureau of the Fiscal Service—were furious because the program was so far along and they were depending on the revenue it was meant to generate.

Olson’s concerns ultimately resulted in then-IRS Commissioner Charles O. Rossotti placing a moratorium on the program’s implementation until the agency developed a low-income filter. Later the IRS would remove the filter, only to add one back several years later.

“She’s been tenacious in representing the taxpayer and taking on the IRS,” said Olson’s predecessor Wilford Val Oveson, a Republican politician and former chairman of the Utah State Tax Commission. “I think I did a good job, but Nina has done better.”

Olson’s work has also inspired those representing taxpayers from outside of the government.

“Listening to her is like drinking a double shot of espresso: I find myself madly jotting down ideas for cases and educational outreach, or making notes of research studies she references,” Michelle Drumbl, director of the tax clinic and clinical professor of law at Washington and Lee University, said in a July 11 blog post.

Prior to joining the Taxpayer Advocate Service, Olson founded and worked as executive director of the Community Tax Law Project, the first independent low-income taxpayer clinic in the U.S.

She is only the second person to fill the role of National Taxpayer Advocate since its creation under the Internal Revenue Service Restructuring and Reform Act of 1998.

Olson credits Oveson with laying the groundwork—hiring more than 2,000 employees and establishing more than 70 offices across the U.S.

But most recognize Olson as giving the office its unique voice and shaping it into the entity it is today.

“She made sure that in those early years, when the IRS was in the midst of a significant reorganization, that that point of view of watching out for taxpayer interest was always front and center,” said Everson, now vice chairman of alliantgroup LP.

Olson said her biggest regret as advocate is that she didn’t notice the IRS’s targeting of certain political groups sooner.

The Treasury Inspector General for Tax Administration found that beginning in 2010 the IRS inappropriately gave greater scrutiny to conservative organizations applying for tax-exempt status under tax code Section 501(c)(4) based on their names or political leanings. 501(c)(4) tax-exempts are allowed to engage in political activity as long as it isn’t their primary activity.

Prior to the report, the issue had been percolating among some circles on Capitol Hill. But it came to a head when Lois Lerner, then-IRS Exempt Organizations Director, at a 2013 conference talked about the agency’s process for reviewing the applications. The revelation spurred years of aggressive IRS budget cuts by a Republican-controlled Congress.

Olson said she hadn’t been aware of the issue until Lerner made her comments and taxpayers began flagging the issue with lawmakers. Until then, the Taxpayer Advocate Service—over the two-plus years the targeting was occurring—had only received 19 cases dealing with 501(c)(4) organizations out of about a million cases, Olson said. The amount wasn’t enough to raise any major alarms, she said, adding that she doesn’t think those organizations were aware the service could be an outlet for them.

“It was so far down the line that we started getting them,” Olson said. “By that point, it was just a mess.”

‘Fussing on the Outside’

Before leaving, Olson hopes to create an exemption to shield cases referred to the Taxpayer Advocate Service from the IRS’s passport denial program. The program can ultimately result in individuals having their passports revoked if they owe sizable tax bills that are long overdue.

Her hope is that some level of agreement—even if it’s just conceptual—can be reached on this and several other priorities prior to her departure so that the next National Taxpayer Advocate will be in a position to “close the deal.”

Olson said she will also be on Capitol Hill in the coming weeks to recommend Congress provide additional funding to the IRS, as part of the agency’s filing season budget, so that it can hire new seasonal workers to take on cases stemming from taxpayers’ complaints about filing-related issues.

Currently, the cases are referred to permanent Taxpayer Advocate Service employees, and over the last few years the uptick in filing season cases has caused a massive backlog and created delays in the advocate office.

Following her departure, Olson plans to continue her work with the International Conference on Taxpayer Rights—a now-annual event she created during her time in government that connects officials, scholars, and practitioners from around the world.

She would like to raise funds, through an advocacy nonprofit she recently formed, to cover the travel costs of speakers—something she wasn’t able to do working for a government agency. She also hopes the nonprofit can sponsor scholarships that will enable people in developing countries to attend the conference.

The public can expect Olson to continue speaking her mind when she’s displeased with how the government is treating taxpayers.

“I’ll be advocating until the day I walk out this door, and then I’ll start fussing on the outside. Then I’ll tell them what I really think,” she said. People “really don’t know how much I’m holding back.”