A candlestick chart illustrating bitcoin price on an electronic screen inside a BitBase cryptocurrency exchange in Barcelona on Monday, May 16, 2022.

Transfer pricing policies are routinely administered with year-end adjustments such that the profit level indicator, or PLI, of a tested party falls within an interquartile range of arm’s-length results. Kroll’s Philippe Penelle takes a closer look at the impact of those adjustments.

Transfer pricing policies are routinely administered with year-end adjustments such that the profit level indicator, or PLI, of a tested party falls within an interquartile range of arm’s-length results. It is one of the most ubiquitous practices in the administration of a transfer pricing policy.

Those year-end payments are contingent and derivative. They are contingent because they are triggered only when the tested party’s PLI falls below the lower quartile, or LQ, or rises above the interquartile range’s upper quartile, or UQ. They are derivative because of their dependency on the distance between the tested party’s PLI and the values of the LQ and UQ, respectively.

Payments caused by a transfer pricing policy administered with year-end adjustments are nonlinear in the PLI of the tested party.

Figure 1 graphs the nonlinear year-end payment received by the tested party as a function of its PLI. 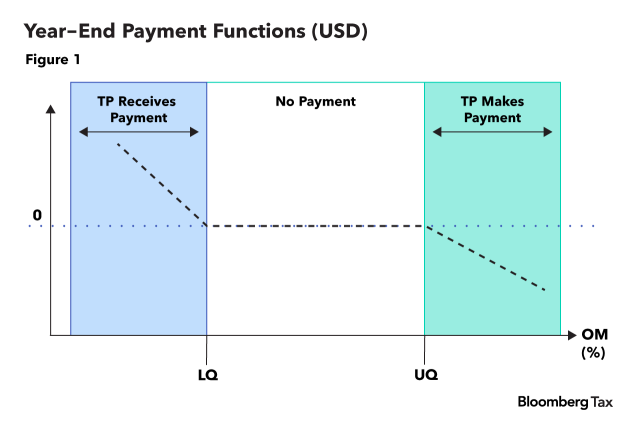 Treas. Reg. §1.482-1(d)(3) requires all ex-ante risks to be clearly allocated and priced at arm’s length. And under Treas. Reg. §1.482-1(f)(2)(ii)(A), to the extent that a transfer pricing policy administered with adjustments (RA1) results in an allocation of ex-ante risks that differs from that when administering the policy without adjustments (RA2), the net present values (NPV) of these realistic alternatives must be equal.

The year-end adjustment obligation causes a transaction within the meaning of Treas. Reg. §1.482-1(i)(7). Relative to RA2, the tested party needs to evaluate how frequently its PLI is likely to fall below (rise above) the LQ (UQ) and, on average, by how much. The same applies to the counterparty.

Netting the expected values of payments received and made under RA1 measures the exchange of value caused by year-end adjustments relative to the value of RA2.

Calculating the NPV of Nonlinear Payments

Figure 2 isolates these portions of the payment function. Expiration is one year out. 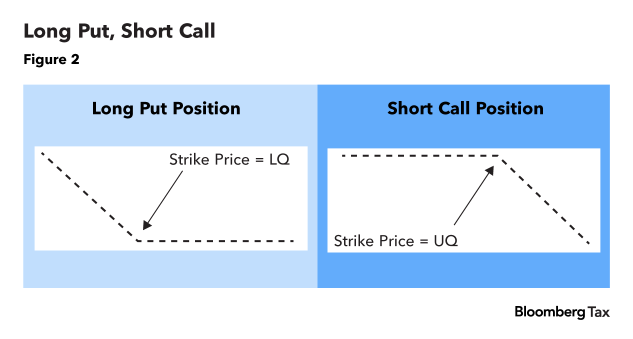 Relative to RA2, the RA1 value gained (lost) by the tested party is measured by the premium of a European put (call) option striking at the LQ (UQ). The opposite is true for the counterparty. Options premia calculated by the 1973 Black and Scholes option pricing equations are NPVs.

There is no reason why these options would have the same values. They are primarily a function of the LQ and UQ strike prices that depend on the comparables’ selection process.

Here’s an example. Suppose we are on the first day of the fiscal year (ex-ante). A distributor’s operating margin is the PLI, and the unadjusted interquartile range is [0.02. 0.05]. And further suppose that, at these strike prices, the value of the put option is lower than the value of the call option. Thus, the counterparty manufacturer is a net beneficiary of RA1 relative to RA2. To cure that, on an ex-ante basis, calculate the UQ that decreases the call option’s value so that adjustments down to the adjusted UQ (claw-back of value) will be less frequent and smaller. That requires adjusting the UQ up in this case. Let the adjusted interquartile range be [0.02. 0.07]. This is the range that must be used to trigger year-end adjustments when the ex-ante range is [0.02. 0.05].

That is why you cannot discount the payoff of an option written on equity; the payoff is nonlinear in the underlying. Figure 1 and Figure 2 showed that the payment function associated with year-end transfer pricing adjustments is precisely the same as the payoff the tested party would receive if the tested party is in a long put position striking at the LQ and short call position striking at the UQ.

This article does not necessarily reflect the opinion of Bloomberg Industry Group, Inc., the publisher of Bloomberg Law and Bloomberg Tax, or its owners.

Philippe Penelle is a managing director in the Transfer Pricing practice at Kroll, an independent provider of global risk and financial advisory solutions. He leverages more than 25 years of extensive experience in designing, valuing, and defending controlled transactions involving the transfer of intellectual property rights on behalf of multinational clients and their counsel.