For some businesses, those hands would then wash themselves of the loans, by selling them to lesser-known—and lightly regulated—companies that may not have that same incentive.

Since at least May, two nonbank lenders have announced their intention to purchase more than $10 billion in Paycheck Protection Program (PPP) loans from banks that say they don’t have the capacity or expertise to service the loans they generated or to handle forgiveness applications.

Some consumer groups say the non-bank servicers’ need to make money from interest paid on the loans is incompatible with Congress’s intent that many of the loans be forgiven. They say the servicers have potential to make much more money selling the borrowers’ other products, and question whether the nonbanks will help borrowers navigate a complicated and emotional forgiveness process.

“This is customer acquisition,” said Jesse Van Tol, chief executive officer of the National Community Reinvestment Coalition. “What’s problematic about that is, if you have nonbank servicers going after PPP loans, these are almost by definition businesses in distress. And those may be businesses that are vulnerable to be targeted for high-cost financing products in the future.”

The program began in April as part of a massive coronavirus pandemic relief bill. It was designed to provide emergency loans to businesses affected by nationwide shutdowns.

As of July 24, almost 5,500 lenders—the majority of them banks—participated in the program, according to the latest figures from the Small Business Administration.

The program held a lot of promise for businesses, too. If borrowers followed the rules about how to spend the money and could prove it, their loans would be forgiven. Even if their loans weren’t forgiven, they would have time to pay it off at a rock-bottom interest rate.

But toward the original end of the program, banks over the PPP, as rules about .

At the same time, a secondary market formed to help banks shed the loans from their books and assume cumbersome servicing that would yield the banks little reward.

In May, to purchase $50 million of PPP loans on the secondary market in partnership with the National Banking Association, an association of black- and minority-owned banks.

As of July 29, The Loan Source had purchased $2.9 billion in PPP loan portfolios from banks, LaHaie said in an interview. That included $300 million in loans acquired from Pennsylvania-based Bryn Mawr Bank Corp. and the $457 million PPP book of Lewiston, Maine-based Northeast Bank.

“It’s not like there’s huge profit in this, but as an SBA lender that’s not a bank, it’s interesting enough for us to want to focus on ,” LaHaie said. “For large banks and larger lenders, it just doesn’t move the needle for them as much as a group like ours.” 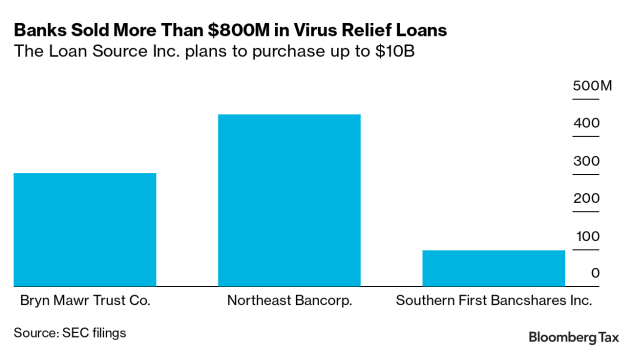 The Loan Source purchases such loans at a discount and makes most of its money from the interest paid, while the banks get to keep the fees they made from originating the loans.

LaHaie said his team isn’t expecting the government to offer blanket forgiveness for the bulk of the loans, even though Treasury Secretary Steven Mnuchin recently told a congressional panel that he prefers that loans $150,000 and less be forgiven. Even if they are forgiven, about 80% of the purchased loans are more than that, LaHaie said.

Bryn Mawr President and CEO Frank Leto said in an interview that the bank decided to sell its PPP portfolio because the forgiveness process presented too many “operational risks.”

“We don’t want to put ourselves in a position where we’re struggling to be able to service these loans,” Leto said. “It’s not like I even have excess capacity in any area.”

Northeast Bank President and CEO Richard Wayne said his team had done its “due diligence” with the nonbank lender.

Wayne said in an interview that his bank liked the The Loan Source so much, the bank agreed to be its partner to extend the Federal Reserve’s Paycheck Protection Program Liquidity Facility to the nonbank lender.

“We did a lot of work around their servicing capability and what their process would be, and how customers would be handled and what the customer experience would be like. And we concluded that they would do a good job,” Wayne said.

LaHaie also said his company was rolling out a workers’ compensation insurance product and other add-on services to help their new business customers.

“Because of the number of customers we have, we’ll be able to help save them money on expenses they otherwise were going to incur,” he said.

But groups that represent small businesses and consumers said a lesser-regulated nonbank lender may not have the customer’s best interest in mind.

The nonbank lending and loan servicing market has had a mixed record of helping customers, especially in low-income and minority communities.

Nonbank lenders have drawn the ire of consumer groups who say their actions range from predatory lending to dubious debt-collection practices.

“The chief concern would be that nonbank servicers don’t really have an incentive to see forgiveness carried through,” said Amanda Ballantyne, executive director of the Main Street Alliance.

While emphasizing she’s not criticizing The Loan Source’s products or intentions, Ballantyne said businesses may then be placed in an uncomfortable situation if their servicer tries to sell them another product—especially during a time of massive stress caused by the pandemic.

While banks weren’t necessarily required to advise borrowers whether they were eligible for forgiveness, the understanding across the market was that they were supposed to handle the forgiveness process as well as the loan applications, Ballantyne said.

The groups all favor a policy solution to put guardrails around PPP loan servicers’ behavior, in addition to a simplified forgiveness application and process to ensure businesses get off the hook for the loans.

Ellen Harnick, western office director for the Center for Responsible Lending, said lawmakers working on another virus relief package should include such regulations. Without a policy solution, borrowers may be saddled with more burdens on top of their current struggles, she said.

“For the smallest of businesses, who in good faith took out what was meant to be a forgivable loan, their biggest risk is that the loan is going to be turned into a debt,” Harnick said.

To contact the editors responsible for this story: at pambrosio@bloombergtax.com; at bkohn@bloomberglaw.com