President Joe Biden speaks while announcing his Board Of Governors of the Federal Reserve nominees in the Eisenhower Executive Office Building in Washington on Monday.
Photographer: Samuel Corum/Bloomberg

Congress historically sets presidential budgets aside, and razor-thin Democratic majorities mean most proposals stand a slim chance of passing -- but they do form a key messaging device. The White House included measures that would add up to the biggest tax increase in history in dollar terms, helping stabilize deficits relative to the size of the economy. 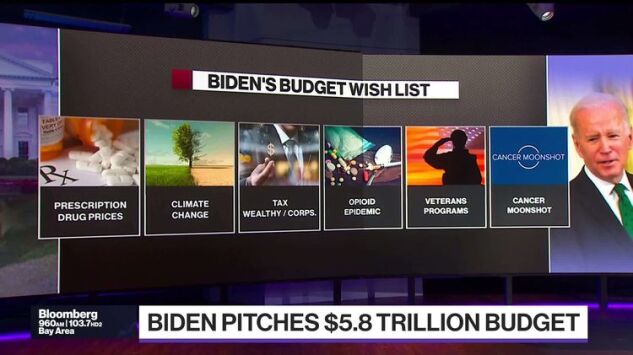 The 2023 budget calls for $1.598 trillion in so-called discretionary spending -- areas that aren’t linked with mandatory programs like Social Security -- with $813 billion for defense-related programs and $769 billion for domestic spending.

That marks a 5.7% increase from the omnibus spending bill for the 2022 fiscal year that was signed by Biden earlier this month. The budget would reduce deficit spending by $1 trillion over the coming decade, buoyed by the elimination of pandemic assistance programs, but with shortfalls averaging 4.7% of GDP over a decade, the national debt continues to climb.

“We are reducing the Trump deficits and returning our fiscal house to order,” Biden said at the White House Monday, referring to the widening budget gaps seen under his predecessor . “It makes prudent investment and economic growth and more equitable economy while making sure corporations and the very wealthy pay their fair share.”

Republicans said the budget unfairly imposes higher costs on Americans while failing to curb spending to cut the debt.

“This budget submission from the president shows he has learned nothing over the past year -- nothing about how his policies have failed the American people -- and he intends to double down on those very policies,” said House Budget Committee top Republican .

The president also sidestepped fragile negotiations over the remnants of his “Build Back Better” agenda, putting only placeholder figures in the document in what White House officials acknowledged was an effort to give lawmakers space to negotiate. That means the costs and revenues for what could be a $2 trillion program aren’t accounted for and it is simply declared fully paid for.

The hope in the White House is that Monday’s document can offer momentum to negotiations with lawmakers like Senators of West Virginia and of Arizona, who have raised concern over historic spending levels and inflation.

Ukraine funding is largely omitted from the document, which was prepared before Russian President ’s invasion, but the budget does allocate $682 million toward assistance to Ukraine - including money for security, energy, cyber-security and economic stability.

Here are some key takeaways:

Biden’s budget forecasts were prepared in November, before the latest surge in inflation, and now appear unrealistic.

Economic growth is pegged at 3.8% this year, slowing toward an annual 2% over the next decade. It assumes consumer prices will rise 4.7% this year, with inflation down to 2.3% in 2023 as supply chain disruptions ease.

White House officials said higher consumer-price increases shouldn’t have a big impact on the deficit expectations, however, given that revenues would also be higher.

Biden is calling for more than $2.5 trillion in tax hikes on wealthy and large corporations over a decade, on top of the nearly $1.5 trillion of increases included in the House’s version of the Build Back Better plan.

The proposal adds a 20% minimum tax on the unrealized capital gains for households worth at least $100 million, a political win for progressives who have been pushing Biden to target the mega-wealthy. The plan omitted a controversial bank-reporting proposal from last year that would allow financial institutions to share account information with the IRS.

If enacted fully, this year’s plan would be the largest tax hike in history, but it includes several major increases that have already been rejected by some Democrats in Congress. Biden again called to raise the corporate rate to 28% from 21%, and hoist rates on the highest-earning Americans to 39.6% -- changes Sinema has said she won’t support. House Democrats also declined to include a version of the billionaires tax in last year’s social-spending bill.

The budget also omitted a proposal to expand the federal deduction for state and local taxes, or SALT. Several House Democrats have said that raising the $10,000 cap on the valuable tax break is crucial for securing their vote on any legislation that alters the tax code.

Biden is calling for $813 billion in total defense spending for the coming year, with the bulk of the funds -- $773 billion -- going to the Pentagon in what the White House describes as “one of the largest investments in our national security in history.”

Funding is included for U.S. nuclear triad and modernization programs, including the nuclear command-and-control and communications network. Northrop Grumman Corp.’s B-21 bomber and the new Columbia-class submarine, built by General Dynamics Corp. and Huntington Ingalls Industries Inc., are high-profile programs to boost the nuclear triad.

In total, the State Department budget would grow 18% over fiscal 2021 levels to $67.6 billion. Of that total, $4.4 billion would go to international programs supervised by the Treasury. The Treasury Department highlighted that the budget provides $1.4 billion for the World Bank, helping restore the historical U.S. role as the largest donor to the development bank.

Beyond the assistance to Ukraine, the budget focuses on climate and health security, with $11 billion and $10.6 billion requested for U.S. efforts to bolster global efforts on those fronts, respectively.

The budget also has a focus on the Indo-Pacific region, with $1.8 billion requested to support U.S. policy in the region as well as an additional $400 million for the “Countering the People’s Republic of China Malign Influence Fund.” The budget also includes $7.6 billion to recruit, train and develop additional State Department personnel, particularly in the Indo-Pacific region.

A host of tax breaks cherished by oil and gas drillers would be repealed -- even as the Biden administration prods the industry to produce more domestically to lower prices and help wean allies from Russian fossil fuel.

Tax breaks worth some $43.6 billion over a decade would end, a step unlikely to pass Congress. Among them is a deduction of intangible drilling costs, which allows oil and gas companies to immediately deduct some expenses, such as labor, site preparation and repairs. Also ending: a deduction for oil and gas production from marginal wells and a percentage depletion deduction that mineral rights owners can claim for a portion of the value of the oil and gas reserves removed from their property.

The budget calls for an increase of about 24% for the Cybersecurity and Infrastructure Security Agency, which is tasked with securing federal civilian computer systems. The increase, to about $2.5 billion, is meant to help agencies harden their computer networks.

The budget also includes funding for the relatively new national cyber directorate to improve the U.S. response to “escalating cyber attacks on government and critical infrastructure.” The administration has in recent weeks warned Russia is exploring possible cyberattacks against U.S. companies and organizations.

Biden used the budget to flesh out his so-called Unity Agenda, a series of proposals he debuted in the State of the Union and has argued should cross political divides. That includes a $33.2 billion proposal for law enforcement, crime prevention and community violence intervention programs that the White House intends as a high-profile counter to the call from some progressives to “Defund the Police.”

Biden also wants $5 billion for an advanced health-research agency he’s championed, which would explore experimental treatments for cancer, diabetes and dementia. The Department of Veterans Affairs would see a historic increase to its budget of nearly one-third from 2021 levels, and $663 million for opioid prevention and treatment programs.

The president still offered some red meat to his progressive base. While climate spending from “Build Back Better” was omitted, the $11 billion for helping other nations deploy clean energy and weather the growing consequences of climate change is more than 10 times the amount lawmakers doled to the effort in fiscal 2022. The spending would mark a massive shift for the U.S., following years of unfulfilled promises of climate funding for developing and vulnerable nations.

Overall, Biden is seeking some $50 billion for programs to address climate change, including $18 billion to build the U.S. government’s resilience to a warming world.

Biden also asks for $367 million for the Justice Department’s budget to support police reform, prosecution of hate crimes, and enforcement of voting rights -- an increase of more than $100 million from 2021. There’s also money for police body cameras and prison reform, as well as $50 billion for affordable housing construction. The administration is also seeking more than $200 million more for antitrust enforcement, which White House aides say will help fight inflation and improve competition.

The Transportation Department would get $26.8 billion, part of which draws on the $550 billion infrastructure bill enacted last year.

There’s $1.4 billion for electric-vehicle charging stations, supporting Biden’s ambition for half of all vehicles sold in the U.S. to be capable of emissions-free driving by the end of the decade.

The Federal Aviation Administration would get an $804 million increase, including $91 million more for aviation safety. The Transportation Security Administration’s budget for airport screening would get a boost of $1.45 billion. The administration proposes adding more than 1,000 employees to its existing workforce, which is below 2021 levels and has suffered from high turnover during the pandemic.

(Adds Treasury funding for World Bank in ‘Foreign Affairs’ section. An earlier version of this story was corrected for a numerical error in the headline.)