President Joe Biden, during his first joint address to Congress Wednesday, will detail a family aid plan that would be funded in part by tax hikes on the wealthy.
Photographer: Stefani Reynolds/Bloomberg

President declared the U.S. has turned the corner on a pandemic that’s killed more than half a million Americans and crippled the economy, promising tax increases on the wealthy to pay for ambitious plans to spend trillions on infrastructure, education and other Democratic priorities.

“America is on the move again,” Biden said in his first address to a joint session of Congress on Wednesday. “Turning peril into possibility. Crisis into opportunity. Setback into strength.” 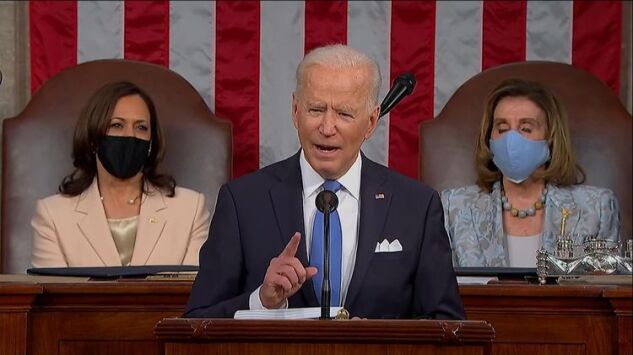 WATCH: President Joe Biden discusses the progress in the fight against coronavirus in his first 100 days in office.
(Source: Bloomberg)

But he warned corporations and wealthy Americans that he expects them to carry more of the burden of financing the nation’s advancements.

“It’s time for corporate America and the wealthiest 1% of Americans to pay their fair share,” he said, promising to “reward work, not wealth” by raising taxes for the richest 1% and ordering an Internal Revenue Service “crackdown on millionaires and billionaires who cheat on their taxes.”

“What I’ve proposed is fair. It’s fiscally responsible,” he said, promising programs financed in part by the tax increases would “create millions of jobs and grow the economy.”

Biden’s 65-minute speech laid out a broad vision for the country’s recovery from the pandemic, centered around a vastly expanded role for the federal government. His aides say he regards the nation’s emergence from a year of lockdowns, death and economic collapse as a unique opportunity to persuade voters that the country is more united -- and poised for massive taxpayer investments.

In the speech, the president unveiled his American Families Plan, a $1.8 trillion package of tax credits and domestic priorities including child care, paid family leave, and tuition-free community college that would be funded in part by the largest tax increases on wealthy Americans in decades.

He also touted his previously proposed $2 trillion infrastructure bill, casting it as a jobs-maker especially for people without college degrees -- Americans who largely supported his predecessor, former President .

“Nearly 90% of the infrastructure jobs created in the American Jobs Plan don’t require a college degree,” he said. “Seventy-five percent do not require an associate’s degree.” 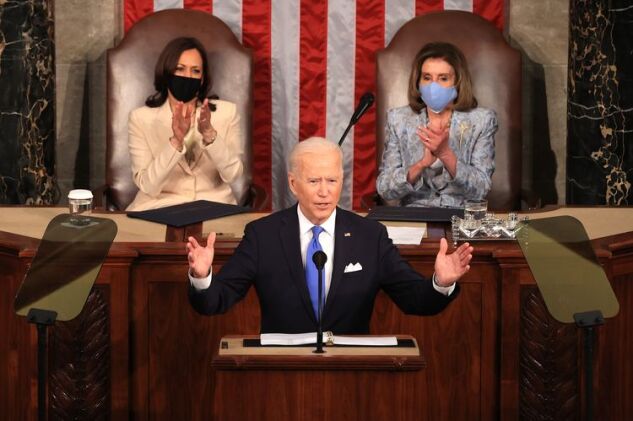 Joe Biden speaks during a joint session of Congress at the U.S. Capitol on April 28.
Photographer: Chip Somodevilla/Getty Images/Bloomberg

The plan, he said, is “a blue-collar blueprint to build America.”

The two proposals follow the American Rescue Plan, a $1.9 trillion stimulus that Biden called “one of the most consequential rescue packages in American history.” Biden’s address also celebrated a coronavirus vaccine rollout that’s delivered more than 315 million shots and a stimulus program that provided more than 160 million checks to taxpayers.

“Our progress these past 100 days against one of the worst pandemics in history is one of the greatest logistical achievements our country has ever seen,” he said. 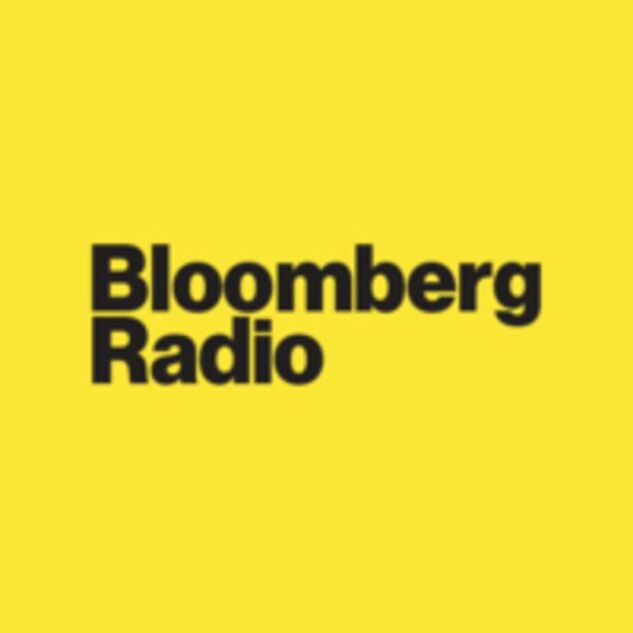 On foreign policy, Biden vowed to stand against Russia and China where he sees America’s interests at risk -- such as in the South China Sea -- but he also reiterated his willingness to work with rival nations on areas such as climate change.

“In my discussion with President Xi, I told him that we welcome the competition – and that we are not looking for conflict,” Biden said of Chinese leader . “But I made absolutely clear that I will defend American interests across the board.”

Biden looked to frame both his accomplishments and aspirations as an implicit rebuttal of the disarray that defined the federal government during the Trump administration, eroding confidence in the nation’s ability to meet big challenges.

“We’re vaccinating the nation,” he said. “We’re creating hundreds of thousands of jobs. We’re delivering real results people can see and feel in their own lives.”

He sought to build popular support for police reform, gun control and immigration proposals that have languished on Capitol Hill. He told lawmakers to pass his immigration overhaul in answer to a surge of migrants at the southern border his critics have called a crisis.

“If you actually want to solve the problem – I have sent you a bill, now pass it,” he said.

And he depicted the revitalized U.S. fight against climate change as a jobs plan, saying scores of Americans could go to work “building more efficient buildings and homes,” installing charging stations for electric cars, planting cover crops in fields to absorb carbon dioxide and manufacturing blades for wind turbines.

“There’s no reason the blades for wind turbines can’t be built in Pittsburgh instead of Beijing,” he said.

Senator , a South Carolina Republican, delivered the GOP response to Biden’s speech. Scott credited Trump for progress against the pandemic, saying: “This administration inherited a tide that had already turned.” 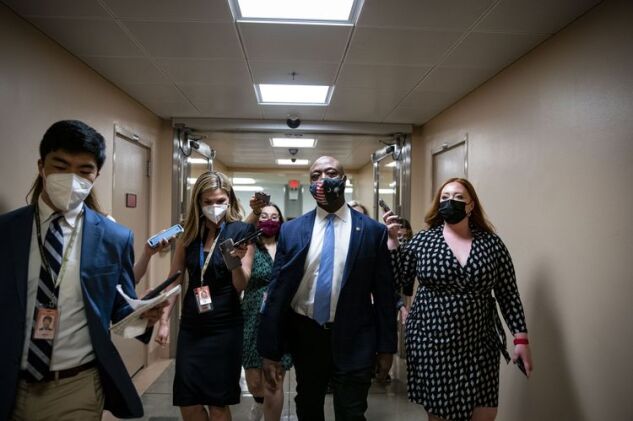 Tim Scott speaks with members of the media while arriving for a vote in the U.S. Capitol on April 28.
Photographer: Al Drago/Bloomberg

He also hit Biden for the slow pace of U.S. school reopenings -- a potential political vulnerability for Democrats, as teachers’ unions allied with their party have been blamed by many parents and Republican lawmakers for keeping children in remote learning.

“Locking vulnerable kids out of the classroom is locking adults out of their future,” Scott said. “Our public schools should have reopened months ago.”

Biden strode to the House rostrum having attended more joint session addresses than any previous president: eight times as vice president and dozens more as a senator. But Wednesday’s was unlike any in the nation’s past. Two women -- Vice President and House Speaker -- sat over his shoulder as he addressed the American people.

Biden portrayed the gathering as a symbol of renewal after the Jan. 6 insurrection at the U.S. Capitol in which Trump supporters nearly breached the House chamber where he spoke. “The worst attack on our democracy since the Civil War,” he said.

Elements of the address emphasized how far the nation still has to go in battling the coronavirus pandemic. Pelosi limited the number of attendees for the event to around 200 people on the advice of medical experts, less than a fifth of the normal attendance.

Members of Congress weren’t allowed to invite guests, and the first lady’s box -- where presidents traditionally position a group of Americans who help illustrate the need for policies outlined in the speech -- was occupied only by and Harris’s husband, .

The first lady held a “virtual reception” Wednesday afternoon with a guest list that hinted at elements of the president’s speech: a child migrant who became a nurse on the front lines of the pandemic, gun control and transgender rights activists, the director of a child care center for at-risk kids, and an information technology worker focused on bringing broadband access to rural Native American communities. 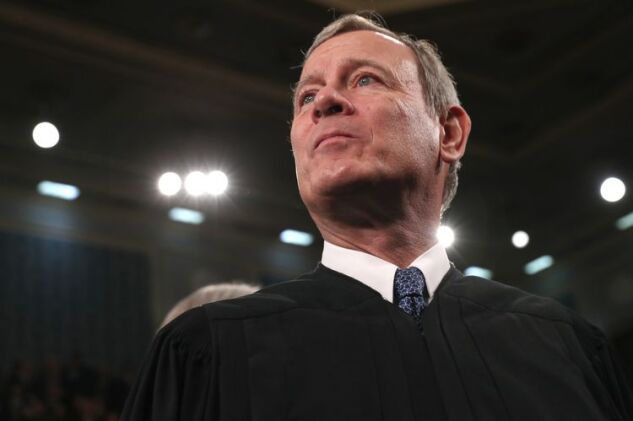 Chief Justice was the only representative of the Supreme Court, while just two cabinet officials -- Secretary of State and Defense Secretary -- attended.

White House officials credited the pandemic for the timing of Biden’s address, which the president had initially pledged to hold during his first month in office. Instead, aides on both sides of Pennsylvania Avenue struggled to sort the logistics of the traditionally standing-room-only event as conditions rapidly shifted with lawmakers receiving vaccines. In addition, Biden’s stimulus legislation took longer than expected to pass both chambers of Congress.

The delay in some ways proved fortuitous, allowing the president to highlight accomplishments that enjoy broad support among voters. Nearly two-thirds of Americans approved of Biden’s coronavirus relief package, 64% support his handling of the pandemic, and 58% back his plan to raise corporate tax rates to pay for infrastructure investments, according to an ABC News poll released Monday.

“The timing gives him an opportunity to take a victory lap not for victory’s sake, but to prove the concept that government can work right for the people,” said Liz Allen, a former Biden aide.

After the address, Biden will follow in the path of his predecessors by taking his message directly to voters, with trips to key swing states to amplify his proposals. The president, Harris, their spouses and cabinet members plan to visit approximately a dozen states. That includes Biden’s trip Thursday to Atlanta, where he’s expected to hold a car rally to celebrate his 100th day in office.

The following day, he’ll visit Philadelphia to celebrate the 50th anniversary of Amtrak -- expected to receive a sizable funding increase under his infrastructure plan -- at the city’s 30th Street Station. Georgia and Pennsylvania marked key electoral victories for Biden in November after they had voted for Trump in 2016.