President Joe Biden, speaking at the White House March 12, has begun to lay out his plans for corporate tax changes. The measures would help fund a massive infrastructure package.
Photographer: Jim Lo Scalzo/EPA/Bloomberg

Biden’s infrastructure proposal would apply a 15% minimum tax on the earnings corporations publicly report on their financial statements, referred to as “book income.” The aim of the proposal—which is similar to legislation previously backed by Sen. Elizabeth Warren (D-Mass.)—is to tax companies, such as Amazon.com Inc., that report large profits to investors but pay little to no federal income tax.

But tax and accounting professionals said often companies’ taxable income is much lower than their book income because of credits and deductions permitted by the tax code, such as write-offs for net operating losses. And if the problem is the tax code, the administration should focus its attention there, they said.

“If Congress thinks the tax code is broken, they should fix the tax code instead of finding something else to tax, which will break that other thing,” said Jeff Hoopes, an associate professor and accounting scholar at the University of North Carolina’s Kenan Flagler Business School.

He and others said taxing the income companies report on their financial statements will likely encourage those companies to manage down their earnings, leading to less useful information for investors. It could also encourage companies to seek changes to financial accounting standards so that the gap between book and taxable income is smaller, they said.

These potential consequences and the challenges of implementing this type of tax are issues the Biden administration will have to grapple with as it moves its proposal forward. Moving the plan through Congress will be complicated. House Speaker Nancy Pelosi (D-Calif.) is hoping the House can pass the package by July 4.

Amazon CEO Jeff Bezos in a statement said the company supported Biden’s focus on investing in infrastructure and a raise in the corporate tax rate to pay for it.

All in the Details

The Biden administration offered new details on the tax in a report released Wednesday. The tax would apply to companies with net book income of $2 billion or more, which is 180 firms, according to the report. Biden campaigned on a much smaller $100 million threshold that would have subjected more companies to the tax.

About 45 of the companies meeting that higher threshold would have owed the minimum tax in recent years under the Biden proposal, with the average seeing an increased liability of about $300 million per year, according to the administration. Those estimates assume other parts of the plan, specifically international tax provisions aimed at stopping companies from shifting profits offshore, are enacted, a Treasury official said Wednesday on a call with reporters.

To assess their liability, companies would calculate the 15% tax on their book profits and their regular tax liability. They would compare the two numbers and pay the difference to the IRS if the book income tax is higher. Companies would be given credit for taxes paid above the minimum book tax threshold in prior years for general business tax credits—including research and development, clean energy, and housing tax credits—and for foreign tax credits, the administration said.

But there are still complicated details the administration needs to hash out. For example, the tax code permits accelerated depreciation, which allows companies to write off more of an asset’s costs in the first years it is used. When calculating book income, those expenses are typically evenly spread out over the life of the asset. The proposal hasn’t specified how the new tax will account for those kinds of timing differences, York said.

“The minimum tax on book earnings is something that sounds really appealing but ends up being pretty difficult to implement,” said Victor Fleischer, a professor at the University of California Irvine School of Law. Fleischer was the Democratic chief tax counsel for the Senate Finance Committee from 2016 to 2017.

Because it’s so challenging it may be more difficult to move forward than some of the other changes proposed in the Biden infrastructure plan, Fleischer said. “I won’t say it’s impossible, but it would be a tough road,” he said. 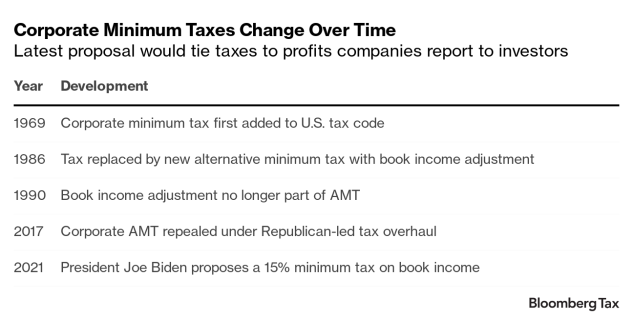 The Biden administration wouldn’t be the first to try to levy corporations that are using tax breaks to reduce or completely eliminate their federal tax bills.

The alternative minimum tax for corporations, which was ultimately repealed under the Republican-led 2017 tax law, was an attempt to address this issue. Under such a tax, corporations calculate their taxable income twice—once to determine their normal liability applying all permitted credits and deductions and a second time under the AMT rules, which disallow certain tax breaks. Companies then pay whichever tax is higher.

A corporate minimum tax was first put into the tax code in 1969. It was revamped under the Tax Reform Act of 1986 and called the alternative minimum tax. The 1986 law also added a book income adjustment to the AMT from 1987 through 1989. Under that rule, if a corporation’s net book income exceeded their taxable income under the AMT rules, then 50% of the difference was added to the AMT income.

Research showed, in response to the book income adjustment, firms manipulated their financial reporting to reduce their AMT burden.

It’s likely corporations would react similarly to the new Biden tax on book income, Hoopes said. “Not only has this come up before, we’ve tried it, and it didn’t work.”

Financial accounting numbers will be less meaningful to investors if companies are managing down their earnings, causing them to make less informed decisions, he said.

There’s a concern that the Biden proposal could result in more companies lobbying for changes to the financial accounting standards, known as the Generally Accepted Accounting Principles or GAAP, that would depress book income, Fleischer said. Companies might not mind reporting lower earnings to shareholders if it means they have to pay less tax, he said.

Companies would likely then place greater emphasis on unofficial, or non-GAAP, earnings figures to tout their performance as rosier than the sanctioned numbers convey.

“If you think non-GAAP is popular now, watch what happens when they start going down this path,” said David Zion, research analyst at Zion Research. “It’d be non-GAAP on steroids.”

U.S. accounting standards are set by the Financial Accounting Standards Board—a private-sector, nonprofit organization based in Norwalk, Conn. that’s recognized as the standard setter by the U.S. Securities and Exchange Commission.

Independent standard-setting is a cornerstone of the U.S. markets. If companies tie their cash taxes to the income they report in their financial statement, every new rule FASB makes gets tinged with questions about tax consequences, said David Gonzales, senior accounting analyst at Moody’s Investors Service.

Zion said that puts a lot of power in the hands of the accounting rulemakers.

“You’d effectively be having the FASB setting tax policy, and last time I looked no one elected them to do that job,” he said.