Don’t read too much into the earnings surges at big banks this quarter.

The nation’s largest banks reduced the money they set aside in the first half 2020 to cover losses on bad loans, and thus boosted their earnings, but these accounting moves don’t signal that they think the pandemic’s economic woes are over.

The coronavirus vaccine rollout is bumpy, job losses are growing, and each bank’s view of the future is different, leading to various estimates of losses—and different impacts on bank earnings. In some cases, the biggest drops in loss set-asides were because the banks’ worst-case scenarios didn’t materialize, not because their outlooks are particularly sunny.

The banks are “feeling better,” Keefe Bruyette & Woods analyst Brian Klock said, but “they’re still cautious because they’re looking at the surge in Covid-19 cases as we’re speaking. So it’s kind of hard to ignore that.”

The nation’s four biggest banks—JPMorgan Chase & Co., Citigroup Inc., Wells Fargo & Co., and Bank of America Corp.—cut their reserves for losses by nearly $6 billion during the last quarter of 2020. Large regional banks—US Bancorp, Keycorp, and Comerica Inc.—this week released some or no reserves.

Early last year the large banks prepared for the worst. They shored up billions in reserves to cover bad loans, partly out of caution that pandemic job losses could spike consumer credit card and mortgage defaults. A major new accounting rule that took effect for most large banks in 2020, the current expected credit losses (CECL) standard, also played a big role.

The CECL standard, considered the most significant change to bank accounting in decades, requires businesses to estimate losses on loans before they go bad and to set aside reserves to cover them instead of waiting for customers to miss payments. If the forecast brightens, the business can reduce, or “release,” reserves, which boosts earnings.

The accounting standard doesn’t spell out a set method to tally future losses. Every bank takes a different approach, depending on its mix of customer credit quality, loan, and asset type.

“It’s an incredible challenge for us as analysts to compare banks side by side when they are all using different assumptions,” said Michael Shepherd, director at Fitch Ratings. 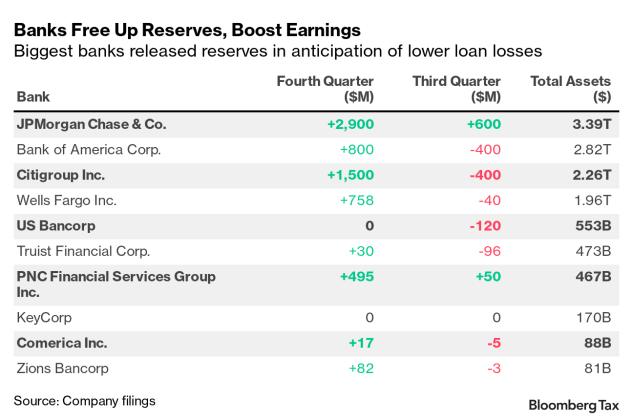 JPMorgan Chase, the largest U.S. bank by assets, slashed the reserves it sets aside to cover future losses by $2.9 billion, boosting its net income to $12.1 billion. But the megabank still has $30.8 billion in reserves as cushion for defaults and foreclosures that could still happen.

The provision for credit losses is an expense against net income. When that expense dips, it bolsters earnings. CEO Jamie Dimon on the bank’s Jan. 15 earnings call cautioned that analysts shouldn’t view the accounting maneuver as true earnings.

“We don’t consider it profit; it’s ink on paper,” Dimon said. “We don’t consider that earnings. And I think you all should look at a little bit differently now, particularly with the change in accounting rules.”

JPMorgan lowered its reserves by the most of any bank so far this earnings season, in part because the bank is the country’s largest by asset size and also because it built up so much cushion in early 2020.

For retail banking giant Wells Fargo, its $758 million reserve reduction was specific to its business plans, not because of a brighter economic outlook. Executives explained that because the bank plans to sell off its student loan portfolio, it doesn’t have to keep reserves to cover future losses from it.

The dynamics of year-end bank business also played a role in some cases. While most banks staved off credit card charge-offs and loan defaults because of government stimulus checks and beefed-up unemployment benefits, overall loan growth stagnated as fewer customers applied for loans during the pandemic.

Because of fewer new loan originations, the banks released some reserves they otherwise would have had to keep on hand, KBW’s Klock said.

“Most of them are still saying it’s the loan mix, lack of loan growth, and better credit quality coming through that’s driving the reserve release. And then only a small part of it so far is the economic outlook,” he said.

The cautious notes sounded by the larger banks is trickling down to smaller institutions. Indiana-based Old National Bancorp kept its reserves intact. CFO Brendon Falconer told analysts on its Jan. 19 earnings call that it would be “challenging” to reduce its reserves given so much uncertainty about the economy.

“Although the economic outlook continues to improve, we believe it’s prudent to maintain a reserve level until we have more clarity on the path of the virus, vaccination rollout and the efficacy of the latest stimulus package,” Falconer said.

Super-regional US Bancorp announced Wednesday that it would hold its loan loss reserves steady, further proof of CECL’s unpredictable impact on even the biggest of institutions, Klock said.

Even though Congress’ recent $900 billion stimulus package has begun to reach the veins of consumers and businesses, the slow vaccine rollout, coupled with rising virus cases, has tempered enthusiasm among banks that the U.S. economy is out of the woods.

That said, the worst-case scenario that spooked the nation and banks in 2020 hasn’t manifested. Banks held on to capital that regulators require them to keep in case loan portfolios deteriorated, and the new accounting requirements for loan loss reserves gave more cushion.

US Bancorp CFO Terry Dolan told analysts that the bank is in a holding pattern to see if the pandemic’s conditions improve. Until then, the bank will continue to hold onto its $2 billion reserve.

“I think there’s enough uncertainty, and we want to be conservative as we think about the appropriateness of the reserve. We want to just see those some of those uncertainties alleviate,” Dolan said during the bank’s earnings call Wednesday

“It doesn’t necessarily mean that the credit cycle is over, or that losses won’t increase over time,” UBS bank analyst and Managing Director Saul Martinez said. “It’s just that what was baked into their estimates for losses was based on an economic backdrop that looks increasingly unlikely.”

To contact the reporters on this story: at dhood@bloomberglaw.com; in Washington at nwhite@bloombergtax.com