The departure of KPMG’s U.K. boss this month after dismissing unconscious bias training as “complete crap” cast a spotlight on the dismal record for racial and gender equality at his firm and at his main competitors.

Unconscious or not, the numbers speak to bias issues throughout the Big Four in the U.K. Fewer than 1% of their partners are black and less than a quarter are female. All four reported pay gaps between their white and ethnic-minority employees of well over 30%, compared to the U.K. average gap of 2.3% in 2019, according to the Office for National Statistics.

“It’s a cultural issue that could take generations to fix,” said Ken Charman, chief executive officer at uFlexReward, a data spinoff from Unilever Plc that tracks and compares pay figures across companies. 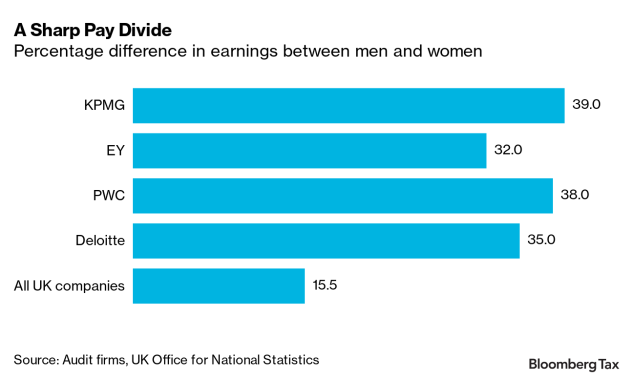 The Big Four firms generally accept the scale of the problem but counter that they’re working hard to mend things.

“Whilst we’ve made progress in many areas—both in terms of our firm’s diversity and our pay gaps—we know we have much more to do. It starts with being transparent about the problem and having a plan to solve it,” KPMG’s head of inclusion, diversity and social equality, Jenny Baskerville, said in an email.

Against those efforts, then-KPMG U.K. chair Bill Michael’s dismissal of unconscious bias training while also telling staff to “stop moaning” about the Covid-19 pandemic was very much off message.

“The role of leaders in driving forward the inclusion and diversity agenda is vital,” KPMG’s Baskerville said.

The problems in accounting echoed those in sectors such as banking, where staff are expected to work fierce hours, often at times when they want to take time off for family, Charman said. “The more highly paid a sector the worse the pay gaps tend to be,” Charman said.

The gaps are even wider for ethnic minorities.

Just three of KPMG’s U.K. partners are black, or 0.5% of the total, a similar proportion to both EY and Deloitte U.K., with PwC, also known as PricewaterhouseCoopers LLP at 1%. Around 3% of people in the U.K. describe themselves as black, according to official statistics.

The issue goes beyond black people, with all of the firms reporting that ethnic minority staff earn far less than white employees.

Deloitte, for example, reports that ethnic minorities earn 40% less than the firm average, largely because few are in senior roles. KPMG’s ethnicity pay gap actually increased in 2020 to 38%, from 36% the previous year.

Sarah Churchman, PwC’s U.K. diversity & inclusion lead, said the figures weren’t acceptable. But she said PwC, like the other big firms, had launched aggressive programs to improve diversity, including setting minimum targets for the number of female and ethnic minority partners. That would put them into higher-earning roles and close the overall pay gaps.

The big firms are also increasing their recruitment of ethnic minorities at entry level. PwC says that 35% of the people it hired last year were from ethnic minority backgrounds, more than double the national average of 14%.

“We are clear there is more we can do to speed up the pace of change and increase diversity across all levels,” Justine Campbell, EY talent managing partner, said by email. “That’s why we continue to raise our diversity aspirations through ambitious targets on gender and ethnicity and have made new anti-racism commitments to focus our efforts. We have a clear action plan to help drive sustainable change in our business.”

—With assistance from Nicola M. White.

To contact the reporter on this story: Michael Kapoor in London at correspondents@bloomberglaw.com