This is part four of a deep dive into the problems plaguing the Internal Revenue Service. We asked current and former government officials, agency watchdogs, and tax professionals to break down how the agency landed in such a dire situation and offer their plan for how the agency can be fixed.

Four years ago, the IRS suffered a technology failure at the worst time: the final day of tax filing season.

For roughly 11 hours, dozens of vital IRS processing systems went down, including the agency’s ability to accept electronically-filed returns.

It wasn’t hackers that brought down the IRS on Tax Day 2018. Instead, a firmware bug caused the failure of a storage device that supports the agency’s nearly 60-year-old IT infrastructure.

Reliance on legacy systems increases the risk of future IT failures. But it also hinders the IRS on a daily basis, contributing to two of the agency’s biggest current customer service problems: a backlog of millions of unprocessed tax returns and the agency’s inability to keep up with a flood of phone calls from the public and their frustrated tax professionals.

“In our business, time is money: We have to account for every minute of our day,” said Evan Morgan, a Miami-based principal in Kaufman Rossin’s tax advisory services department. “If I agree to do a tax return, and something that IRS does causes me to spend more time than I need to, then either I have to come back to you and ask you for more money—which you’re not going to be happy about—or I’ve got to eat it and have less profit.”

IRS Commissioner came to the agency in 2018 with decades of experience as a Beverly Hills-based tax attorney, billing himself during his Senate confirmation hearing as someone intimately familiar with the difficulties taxpayers face in dealing with the agency. The next year, Congress passed a broad IRS reform law that called for the agency to improve its customer service.

And yet, the IRS is still struggling. The Covid-19 pandemic magnified longstanding structural deficiencies that hamper the IRS’s ability to fulfill its core mission of collecting revenue and enforcing tax laws—problems that money alone can’t solve. More resources would help, but with or without a funding boost, the agency needs to confront the technology, workforce, and public perception problems at the root of its customer service struggles.

The IRS already spends billions of dollars a year on IT, but agency officials say they need more to execute a long-term strategic plan, including an ambitious project to modernize the system that stores taxpayer information. In this case, stable-long term funding does appear to be a silver bullet to cure the agency’s technology woes, but it will be years before the agency can move on from the legacy systems that contribute to its customer service challenges.

Employees who process paper tax returns need to manually input data into a system built in the 1960s, known as the Individual Master File, that holds taxpayer data. A government watchdog said last fall that the IRS system, one of the oldest still in use by the federal government, relies on an “archaic” assembly language code that is difficult to write and maintain.

The reliance on legacy systems makes the process take longer and requires hours of training for new hires, exacerbating the agency’s recruiting challenges.

“I’m watching the IRS try to recruit people who are able to program their existing technology, because you have to make fixes, you have to make changes at the beginning of each filing season,” said Natasha Sarin, Treasury’s deputy assistant secretary for economic policy. “It’s just incredibly expensive to find those people.”

Technological limitations are also hampering IRS phone service, with operators unable to keep up with many more times calls than they can possibly handle. The IRS has repeatedly asked the public to check its website before picking up the phone, but the most-frequently-used application on the IRS website isn’t all that useful.

The nearly-20-year-old “Where’s My Refund?” tool is popular—taxpayers accessed it roughly 629 million times last year, according to an April report from National Taxpayer Advocate Erin Collins. The tool will verify that a return was received, approved, or is on the way, but IRS officials told Collins that it isn’t capable of accessing data sources that house more detailed information, like whether a return was flagged for an error.

“The lack of detailed information in the application has led taxpayers to call IRS for live assistance, or in some cases file a second return, which creates additional work for IRS staff,” Collins said.

Collins said the IRS has no plans to significantly upgrade the “Where’s My Refund” tool—blaming a lack of resources, funding, and technical limitations—even though the Treasury Department has identified it as a high priority for modernization.

The IRS is banking on a long-in-the-works IT project called the Customer Account Data Engine (CADE) 2 to help solve some of its customer service problems. It is one of the centerpieces of the agency’s long-term IT strategy.

A lot is riding on the project, which is supposed to provide state-of-the art individual taxpayer account processing for faster refunds, notices, and payment postings. It will also allow IRS employees to more quickly access data, speeding up interactions with taxpayers, according to IRS Chief Information Officer Nancy Sieger.

Sieger said in an interview that the project has experienced major wins so far. Early work on the project has sped up the time e-filing taxpayers receive refunds to 7-10 days from 4-6 weeks, she said.

The IRS already spends a sizable amount maintaining and upgrading its IT systems, with nearly $25 billion allocated between fiscal 2011 and fiscal 2020. But resources are still an issue, even for a project as important as CADE 2. 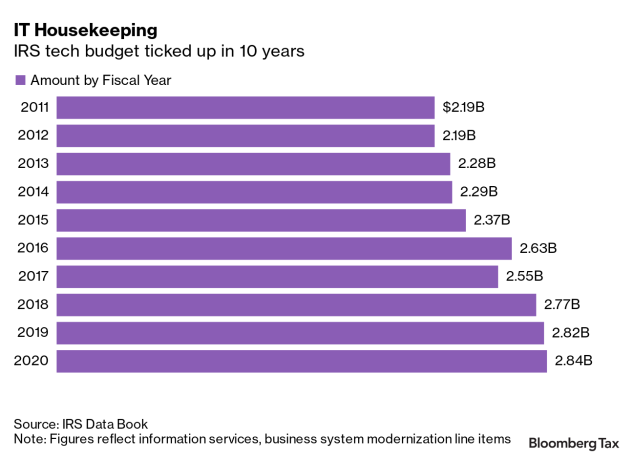 An effort to convert major components of the legacy system to more-modern Java programming language in CADE 2 is 80% completed and should be finished by 2023, according to Sieger. The next phase happens next year, where the old and new systems will run in parallel.

After that, it is up in the air where the project will stand since the agency’s tech modernization effort is 57% funded, she said. A bigger budget will be needed to fully retire the 60’s-era Individual Master File.

“We do have a very detailed, very robust, very current Individual Master File modernization plan,” Sieger said. “And we are hopeful that additional modernization funding will be provided so that we can initiate that plan and really roll up our sleeves to modernize the entire individual master file. Today we are not fully funded for that work.”

Like any business, the IRS cannot employ a set-it-and-forget-it policy when it comes to technology. Stable funding is required to retain employees, hire new ones, and ensure software and systems are regularly updated to ensure the agency’s critical information is secure.

And since funding for the IRS is tightly controlled by Congress, it is up to lawmakers to ensure it has the money it needs to keep all its functions running smoothly.

“The IRS is limited. You can’t move money from bucket A to bucket B,” said former IRS Chief Information Officer Terence Milholland. “You have to get money that’s sustainable and isn’t cut.”

Stability isn’t one of the hallmarks of the annual congressional appropriations process, where lawmakers routinely rely on short-term funding extensions called continuing resolutions to keep the government open while negotiations play out. For fiscal 2022, Congress passed four different continuing resolutions before President on March 15 signed an omnibus funding bill giving the IRS a $675 million budget boost.

“If they finally get a budget, they then have to spend all they have by the end of September, and pray that the thing might get renewed,” Milholland said. “It’s madness.”

The Biden administration wants to super-charge the IRS budget, proposing to allocate $80 billion over a decade for the agency to more than double its workforce, increase enforcement of corporations and the wealthy, and modernize its business systems.

That proposal is stalled in the Senate along with the rest of the administration’s broad tax, climate, and social spending plans. But even if the agency gets the funding it seeks, tech upgrades won’t offer results in time to fix short-term problems like the return backlog, according to former IRS Commissioner Mark Everson.

Everson said the agency is “suffering” because it hasn’t successfully tackled its short-term problems. The most immediate solution to things like the backlog, he said, are to provide IRS employees with the low-tech resources they need to work their way through.

The administration acknowledges that fixing the IRS’s tech will take both time and money.

“It’s not something that, even when resources come, is going to happen overnight because you’re transitioning the entire legacy system—the oldest legacy system in the U.S. government—into the 21st century,” Sarin said.