Some business owners looking to sell their companies are accelerating deal timelines to avoid a potentially bigger tax bite in case Democrats win the White House and Senate in November.

Former Vice President Joe Biden—who is leading President Donald Trump in many swing state polls—wants to raise the current 20% tax rate on long-term capital gains to the rate applied to ordinary income for those making more than $1 million. His proposal would also increase the top rate on ordinary income to 39.6%, up from 37%.

Sellers have been hastening deals that would have otherwise happened in three, six, or even 12 months, said Winston Shows, a senior vice president at investment bank and financial services firm Houlihan Lokey Inc. Conversations on the topic started to pick up over the summer, with pressure increasing as the election draws near, tax professionals said.

“I have, in the past few weeks on three separate occasions, had sellers indicate to me that the potential tax increase under a Biden administration is a primary driver of the timing of their transactions,” said Shows.

Higher-income business owners would face nearly double the taxes after a sale under Biden’s proposal. Capital gains taxes are applied to the difference between the sale price and basis—or the value of an owner’s investment—in an asset.

Because founders can have very little basis in their businesses, their capital gains taxes upon sale can be substantial. For founder-owners who’ve spent their whole lives building up their businesses, that single sale “is often their one big shot,” said Shows. 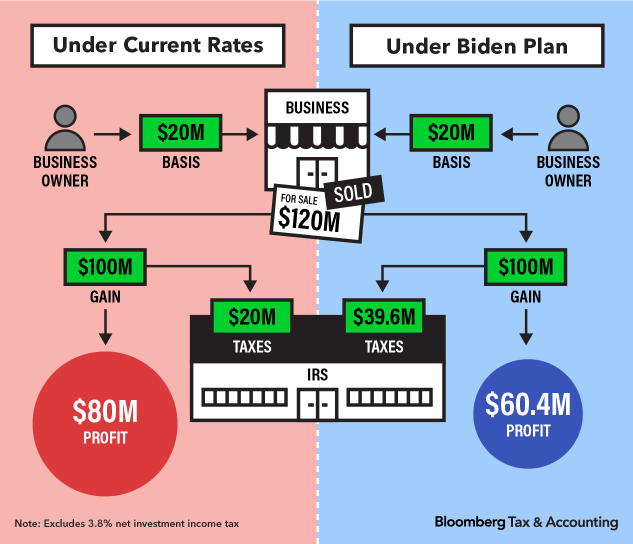 A lot of stars will have to align for accelerating a deal to be worthwhile in the near term: Biden would need to win, Democrats would likely need majorities in both chambers of Congress for a capital gains hike to have a chance, and the new Biden administration would need to decide to prioritize tax legislation over other campaign promises.

While concerns about the ripple effects of a capital gains rate hike are widespread, the push to complete sales more quickly isn’t universal, tax and finance professionals said. If someone wasn’t planning on selling for several years, for instance, this kind of speculation isn’t likely to compel them to action, and taxes aren’t the only factor on which business owners base the timing of their sales.

But in addition to owners of the closely-held businesses they founded, private equity and other funds that take large stakes in startups and other businesses are in some cases seeking to move more quickly on sales based on the prospect of a tax hike.

Brian Keller, a partner at Crowe LLP in Illinois who specializes in private equity, said he has had clients interested in accelerating deals, but generally only if they were already planning on selling in January or February and have held stakes for more than three years in the business they want to sell.

Private equity fund managers can get long-term capital gains tax treatment for compensation in addition to management fee income, known as carried interest, which is a portion of the fund’s profits. But the 2017 GOP tax code overhaul required them to hold investments for more than three years to get this special tax treatment, which Keller said factors into the urgency of a fund’s potential sale.

Meanwhile, parties negotiating large corporate mergers and acquisitions are less likely to want to, or be able to, speed up their deals, said James Stanley, a managing director with Alvarez & Marsal Taxand LLC in San Francisco. That is because they are more interested in acquiring a new technology in many cases and often need to pass regulatory muster, he said.

“The closely-held businesses, where you’ve got generational owners and they would be looking to sell, they would be impacted specifically,” Stanley said. “And it’s really financial sponsors, private equity funds, and even venture capital funds that are probably most focused on the changes that are coming down the road.”

Some sellers who might have previously planned to complete a deal in early 2021 are eyeing an end-of-year deadline—either rushing to close or getting everything ready to pull the trigger, if needed, between whenever the presidential election is decided and Dec. 31, tax and financial advisers said.

While it would take time for a Biden administration and Congress to pass a tax law—the 2017 tax law wasn’t enacted until nearly a year into President Donald Trump’s first term—there is some concern that a capital gains hike could be retroactive to the beginning of 2021.

There is little precedent for major changes to the tax code—especially tax increases—to go into effect retroactively. Of all the major pieces of tax legislation that have gone into effect in recent history, only one increased rates retroactively—a 1993 tax rate hike early in President Bill Clinton’s first term (Public Law 103-66)—tax and finance advisers noted.

Still, tax professionals said there is pressure to ensure that deals are closed to shield them from potential capital gains increases.

“We definitely feel like there is a push from clients to get tax-sensitive M&A deals done as soon as possible,” said Candice Turner, a principal in Grant Thornton LLP’s M&A tax services group.

In the nearly two months between the election and the end of the year, when sellers have certainty as to who is in charge in 2021, things should really heat up, Turner said.

“I’m not going to make any plans to do anything other than work then,” she said.