California lawmakers and Gov. Gavin Newsom (D) are proposing different ways to reach the same goal: help residents get around the federal $10,000 cap on deductions for state and local taxes.

Both proposals stem from Internal Revenue Service approval in November of tax mechanisms already in place in seven states—and being considered in several more—that use an entity-level tax on owners of pass-through businesses to avoid the SALT deduction cap in place since 2017. The businesses can pay the tax in exchange for reducing state income tax liabilities for their members.

A new California Senate bill (SB 104) would give pass-throughs—partnerships, limited liability companies, and S corporations—the option to pay an entity-level income tax that would be fully deductible. The bill doesn’t specify a tax rate yet. Individuals who are members of those businesses would exclude the amount the entity pays from their gross income.

About 1.5 million business owners could benefit from the bill, author Sen. Mike McGuire (D) said. It is most like measures in Connecticut, Louisiana, New Jersey, and Oklahoma, he said.

“This would give direct and immediate relief to some of the most hard-hit mom and pop businesses in California,” said McGuire, who chairs the Senate Governance and Finance Committee. 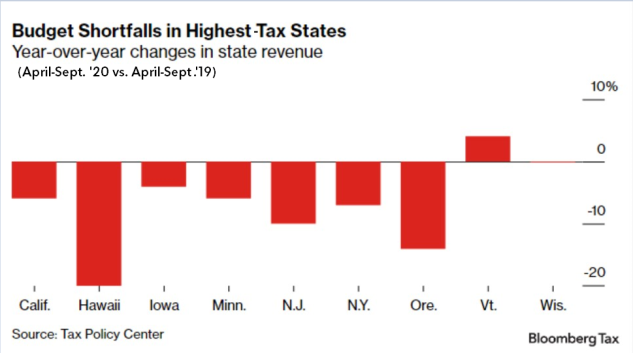 The bill applies to tax years through 2025, coinciding with the expiration of the 2017 federal tax law’s SALT deduction cap. Efforts to lift the cap haven’t made headway in Congress, but high-tax states are hopeful the Biden administration and the new Congress might change the dynamic.

Newsom’s proposal is narrower, applying only to S corporations. It would give those businesses the option to pay a 13.3% income tax rather than the 1.5% that California currently imposes on S corporations. Shareholders would get a tax credit equal to 13.3% of their passed-through income. Under current California law, an S corporation’s income is also taxable at the shareholder level.

About 640,000 S corporations filed California returns in 2018, according to tax board data.

The administration included a summary in its overall budget plan released Jan. 8 but hasn’t issued a proposed bill yet.

Both proposals would preclude multi-tiered LLCs from using the option but go about it in different ways.

The bill would make the income exclusion available only to individuals who are partners, shareholders, or members of the pass-through entity, so that lower-tiered pass-throughs couldn’t use the benefit.

Newsom’s limitation to S corporations also narrows the benefit primarily to individuals, since S corporation shareholders can’t be corporations. If California offered the option to all pass-throughs, when an individual claimed the credit it would be difficult for the state Franchise Tax Board to trace through layers of ownership to ensure that the ultimate entity paid the elective tax, Department of Finance spokesman H.D. Palmer said.

Limiting the plan to S corporations also makes the proposal easier to administer, since S corporations already report their income to the state, Palmer said. The tax board would have to change its systems to capture reporting from other types of pass-throughs.

Lawmakers will discuss Newsom’s proposal and the bill over the next few months, and changes are likely. McGuire said he wants to enact some form of SALT cap workaround as quickly as possible, to take effect in 2021.

He said business groups are suggesting other ways to get around the cap, but he isn’t willing to go beyond mechanisms blessed by the IRS.

From a taxpayer perspective, the governor’s proposal for a credit is easier to use and more revenue neutral, Scott Roberti, managing director for indirect tax at Ernst & Young LLP, said. As the Senate bill is written now, it may not be a dollar-for-dollar reduction in tax liability.

A taxpayer is more likely to use the option if it “gets put in the same position as it would have been and the state is made whole,” he said.

California’s adoption of some relief from the SALT deduction cap is an important part of economic recovery from the pandemic, especially because the companies that could benefit from it are highly mobile, Roberti said.