President Donald Trump has gone back and forth on the idea of indexing capital gains to inflation, something supporters say he would be able to do without Congress.
Photographer: Nicholas Kamm/AFP/Getty Images

The president’s ability to index capital gains to inflation has been widely viewed as illegal, although supporters see hope in recent legal developments.

The current administration has been under pressure from some, like Sen. Ted Cruz (R-Texas), to index capital gains for inflation. Although he has previously waffled on the move, President Donald Trump on Aug. 30 indicated support for the idea, retweeting two messages backing it.

He added “An idea liked by many?” to a tweet from Forbes Media Chairman Steve Forbes, which linked to a Cruz co-authored article seeking the change.

Trump hasn’t so far seemed concerned about the legality of the idea, previously saying he could make the change himself.

Not all administrations have taken that view: Nearly 30 years ago President George H.W. Bush’s administration considered indexing capital gains to inflation, but the idea was dropped after the White House Office of Legal Counsel concluded that the Treasury Department couldn’t do it without Congress. That position was backed by top administration lawyers, including current Attorney General William Barr, who served in the same role under Bush.

“Not only did I not think we could, I did not think that a reasonable argument could be made to support that position,” Barr said in a 1992 speech.

While many scholars view the idea—known as presidential indexation—as illegal, supporters see an opening given developments in the courts since the early 1990s. That includes C. Boyden Gray, who served as White House counsel to Bush when the policy was under consideration.

“I was in favor of indexation but I didn’t see as a lawyer how it could be done,” Gray told Bloomberg Tax. “But I think that’s different now.”

Those pushing for the change—including the advocacy organization Americans for Tax Reform and 21 Republican senators who recently wrote Treasury on the issue—may still face an uphill battle in convincing the administration. Treasury Secretary Steven Mnuchin has been hesitant to take action so far.

“This is now an educational campaign out through the shareholder industry, so that people can do the calculation in the back of their head, ‘This is what it means to the economy, to my industry, to my bank account,’” said Grover Norquist, founder and president of Americans for Tax Reform.

An Issue of Interpretation

Gains accrued from buying and selling investment assets like stocks, bonds, and real estate are subject to federal taxes as high as 20% when the asset has been held for over a year. The gains subject to tax are generally calculated by subtracting the purchase price from the sale price.

Because the U.S. economy typically experiences some inflation every year, indexing would effectively lower capital gains taxes by making less of the gain subject to tax. Last year the Penn Wharton Budget Model estimated that indexing could reduce revenues by $102 billion over a decade.

Supporters argue that people can end up owing tax on investments that lose money after adjusting for inflation, while opponents say it would add to the deficit and primarily benefit the wealthy.

The crucial question on whether the executive branch can change the policy is how the original “cost” of the asset, as described in Section 1012 of the tax code, is measured. Proponents of presidential indexing say Treasury can interpret “cost” in real terms, which would mean adjusting for inflation.

Their argument is based in the legal doctrine established by the U.S. Supreme Court’s 1984 ruling in Chevron U.S.A. Inc. v. Natural Resources Defense Council Inc. That ruling held that courts must show deference to agencies if there is ambiguity about what Congress authorized and an agency’s regulation reflects a reasonable interpretation.

The Bush administration concluded that indexing by executive action wouldn’t be entitled to Chevron deference because Section 1012’s meaning with the word “cost” is clearly the initial price paid. 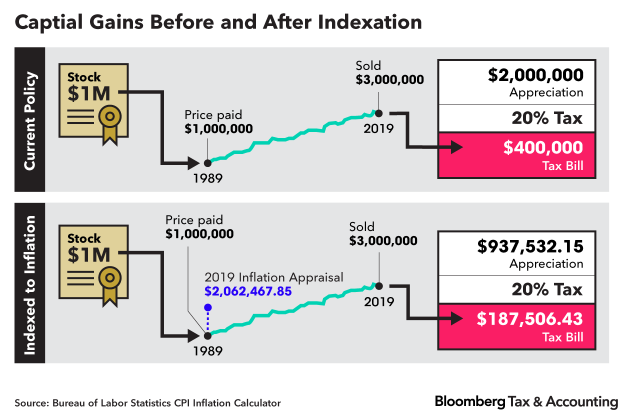 More than 25 years later, the lawyer who wrote the 1992 memo thinks it holds up.

Timothy E. Flanigan, who served as assistant attorney general for the Office of Legal Counsel, stands by his analysis given the dictionary definitions of “cost,” the legislative history behind Section 1012, and how subsequent Congresses have relied on the idea that “cost” in the section means the price paid.

“I believe its conclusions are correct,” Flanigan, now serving as the chief legal officer for Cancer Treatment Centers of America, told Bloomberg Tax in an interview. He added, however, that he would be respectful of a differing analysis from Barr.

Not everyone agrees: Gray and others point to the U.S. Supreme Court’s 2002 decision in Verizon Communications Inc. v. FCC, which dealt with the meaning of the word “cost” in a telecommunications statute.

Charles J. Cooper and Vincent J. Colatriano, partners at Cooper & Kirk PLLC in Washington, argued in a 2012 paper that the Verizon ruling rejected an argument based on the “plain meaning” of the word cost.

Gray said he thinks the Verizon decision has persuaded executive branch lawyers to back the view that indexation by regulation would be legal.

“I think they’ve changed their opinion, as well they should, as a result of the Supreme Court decision in the FCC case,” he said.

But some legal experts argue the context in which “cost” is used in Section 1012 is very different from that in the law at the center of the Verizon case.

Lawrence A. Zelenak, a tax law professor at Duke Law School, said that “about a century’s worth of history of what Congress has meant in this context” indicates that the law doesn’t authorize presidential indexation.

That view was backed in a recent paper published in the Yale Journal on Regulation by law professors Daniel Hemel at the University of Chicago Law School and David Kamin at New York University School of Law.

“Insofar as Verizon Communications confirms that the meaning of ‘cost’ is contextual, it confirms what was already known,” Hemel and Kamin wrote. “And, as the OLC memo explained in detail, the context surrounding the word ‘cost’ in Section 1012 suggests that no inflation adjustment is permitted.”

Cooper said that he didn’t see a lot that was new in that analysis.

“Hemel and Kamin simply disagree with our reading of the relevant statutory provisions and caselaw,” Cooper said in an email. “We continue to believe that we have the better of it.”

Hemel and Kamin highlighted recent developments that they argue strengthen the argument against the legality of presidential indexation.

One is a post-1992 string of cases that established the major questions doctrine, which states that some issues are big enough for courts to presume Congress would have delegated discretion to an agency expressly if that was what it meant to do.

The Supreme Court’s 2015 ruling in King v. Burwell, which upheld part of the Affordable Care Act, is one of these cases. Chief Justice John Roberts wrote that the billions of dollars at stake each year and the broad effect on health insurance prices created a question of deep “economic and political significance” that Congress would not have delegated to the IRS.

Hemel said in an email that indexing capital gains would fit Roberts’ test of being a question of “deep economic and political significance.”

But Cooper argued that the potential effects of presidential indexation look very different from the health care “death spirals” that Roberts described in that ruling.

“The notion that such a regulation would destabilize any affected market, or send the Internal Revenue Code (or any of its provisions) into a death spiral, is obviously ridiculous,” Cooper said. “Nothing remotely like this can seriously be said about an IRS regulation reinterpreting the term ‘cost’ to account for inflation in calculating capital gains.”

Cooper also said that while the King v. Burwell ruling noted that deference wasn’t appropriate because the IRS lacked expertise in crafting health insurance policy, the core mission of the agency is to craft tax policy. 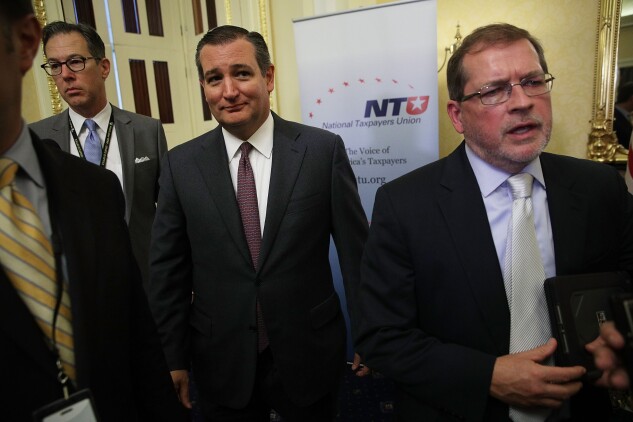 Changes at the high court go further, according to Hemel and Kamin, who highlighted criticisms of the Chevron doctrine by Justices Roberts, Clarence Thomas, Neil Gorsuch, and Stephen Breyer.

Justice Brett Kavanaugh, the newest member of the court, previously endorsed a broader major questions carve-out from Chevron deference, they noted. That means a majority of the court is on the record being skeptical about Chevron, which Hemel and Kamin asserted could mean bad news for an indexing regulation.

“But until the Supreme Court overrules Chevron, an agency reinterpretation of the capital gains provisions of the tax code would be entitled to judicial deference,” Cooper said.

Regardless of the legal questions, it’s unclear whether someone could show they were injured by the policy change in order to have standing to try to stop it in court.

Hemel and Kamin identified at least one example that could meet standing requirements: if a taxpayer were to see their overall tax liability increase because indexing caused them to lose out on charitable giving deductions.

This hypothetical seemed to fit into the traditional approach to standing in tax cases where a taxpayer is complaining about their own higher liability, according to Howard E. Abrams, a visiting professor at Harvard Law School who agreed presidential indexing would be illegal.

Peter J. Ferrara, an economics fellow at The King’s College in New York, wrote in a June paper for Americans for Tax Reform that no one would be able to sue if indexing was done by regulation. That includes lawmakers, legal scholars, and tax organizations that would oppose a potential policy change, he wrote.

“Claiming that a tax cut is bad policy, or that it will increase the deficit, does not satisfy ‘standing’ requirements,” Ferrara said. “Courts are not open to hear debates about what policies cause economic growth, or create jobs, or wage increases. When the policy provides a tax cut for someone else, standing is even more remote.”

To contact the reporter on this story: in Washington at abagchi@bloombergtax.com