The need for help during the pandemic has fueled companies' lobbying efforts so far this year.
Photographer: Stefani Reynolds/Bloomberg

Companies and trade groups have reported major benefits from provisions in a late-March virus relief package, and their lobbying efforts continued after the law’s enactment.

The next relief legislation, over which Republicans and Democrats recently kicked off negotiations, may not be as sweeping as the $2 trillion CARES Act (Public Law 116-136), but Senate Republicans last week called for continuation of some elements, including checks for American families and forgivable loans for businesses.

Which tax breaks will make it into final legislation that can pass the Democrat-controlled House and the Republican-controlled Senate remains unclear, but lobbying disclosure forms indicate the private sector is pushing for more benefits along the lines of those enacted in March.

“There’s a natural tendency to take existing programs and enhance them, as opposed to creating new programs,” said Sage Eastman, a senior Republican strategist at Mehlman Catagnetti Rosen & Thomas and former senior counselor to the Ways and Means Committee. “You’re prudent to find a path of least resistance, and creating something out of whole cloth is a little harder to do, given all of the policy questions and unintended consequences policy makers want to think through.”

The National Retail Federation was among at least 17 organizations and companies mentioning in their first and second quarter disclosure forms a CARES Act provision that lets corporations shift losses to earlier years, triggering refunds of prior taxes they’ve paid. This part of the law also expanded the amount of income companies can write off with losses. The NRF is urging members to ask lawmakers to modify this provision to help them get their loss refunds more quickly. 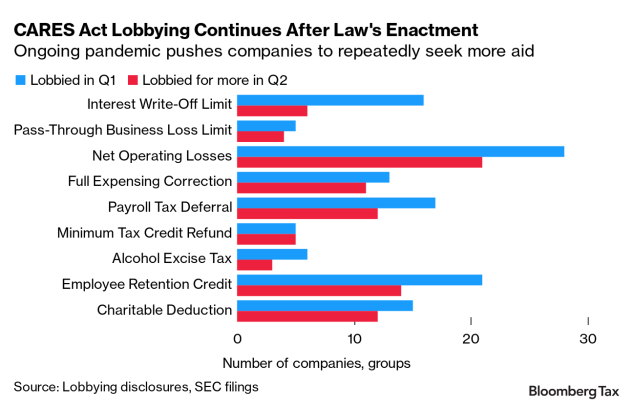 At least 14 banks and 19 retailers, including giants like Macy’s and Nordstrom, have reported benefiting, according to a Bloomberg Tax analysis of public company financial forms.

These tax breaks continue to appear in more recent lobbying forms not because they were insufficient, but likely because the pandemic is dragging on “for a lot longer than expected, and that calls for additional relief,” said Marc Gerson, another former Ways and Means Committee counsel, now a member of Miller & Chevalier Chartered.

“Things have changed—the crisis has continued,” he said.

The Retail Industry Leaders Association, which counts Macy’s and Nordstrom among its members, asked for an expansion of the loss provision, a credit incentivizing businesses to retain employees, and a payroll tax holiday, going beyond the CARES Act’s payroll tax deferral.

Already, lawmakers on both sides of the aisle have proposed expansions of the retention credit, making it a possible candidate for the negotiated package.

Some companies that lobbied on CARES provisions have already reported benefiting from the changes.

Duke Energy and Sempra Energy reported lobbying on a provision of the CARES Act that sped up refunds of credits stemming from a now-obsolete alternative minimum tax system, while Peabody Energy Corp. reported “monitoring” this provision. All reported reaping millions in new liquidity from this provision in quarterly financial filings.

In the quarter following the law’s enactment, Duke Energy reported lobbying on general business credits, refunds of which some groups have pushed Congress to accelerate. In the second quarter, Sempra and Peabody mentioned more general tax relief in their lobbying disclosures.

Red Rock Resorts, which lobbied on a CARES Act fix of a 2017 tax law error, allowing companies to now fully and immediately write off the costs of their interior renovations, said in a financial filing that it would benefit from this correction. Red Rock then lobbied on CARES Act and tax issues “related to COVID-19 relief” in the second quarter.

Marathon Petroleum and MGM Resorts both reported lobbying in the first quarter on a part of the CARES Act that temporarily lifted a limit on the amount of debt interest companies can write off, and both reported benefiting from it in financial filings.

MGM Resorts, which in the second quarter reported lobbying on tax issues related to the CARES Act, declined to comment.

—With assistance from Colleen Murphy.