U.S. cities are projected to lose about $360 billion of revenue through 2022 because of the economic damage caused by the coronavirus pandemic, an unprecedented loss that would trigger deep spending and job cuts, according to a National League of Cities analysis released Thursday.

Pennsylvania’s municipalities will be hit the hardest, with the potential loss of about 40% of their revenue this year, followed by those in Kentucky, Hawaii, Michigan and Nevada, the advocacy group calculated. The projections are based on the expected rise in unemployment and assumes that every 1 percentage point increase in joblessness will cause tax revenues to fall about 3%.

The dire outlook adds to the growing warnings from state and local government officials about the financial impact of the pandemic-related shutdowns. Without aid from the federal government, cities will be forced to enact vast budget cuts that would exert a drag on the economic recovery.

The survey’s release came a day after Federal Reserve Chairman said Congress and the White House may need to enact further economic stimulus beyond the $3 trillion already allocated. House Democrats have proposed a $3 trillion measure that would funnel $1 trillion to cash-strapped state and local governments, though it faces uncertain prospects in the Republican-led Senate.

“If America’s cities are not provided the funds from the federal government, we won’t be a part of the economic solution,” said , the league’s chief executive officer. “This survey, and the findings, puts a face on the impact of the pandemic and the need for city leaders to get direct funding to respond quicker than at the state level, where most of the funding has gone in the past.” 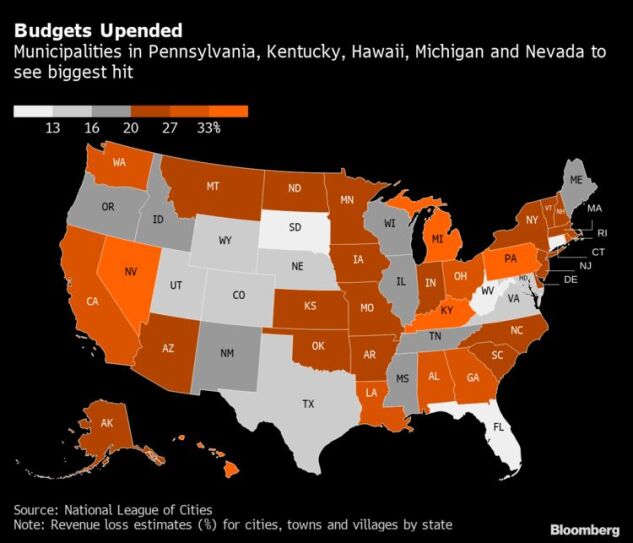 The fiscal impacts are being felt around the country, in cities at the epicenter of the outbreak and those whose economies have been shuttered to prevent it. San Francisco budget shortfalls of $3.6 billion over the next four years. Houston faces a $169 million shortfall and is seeking to furlough 3,000 workers as part the mayor’s fiscal 2021 budget. To balance its budget, the city will have to use all of its rainy-day fund that’s reserved for emergencies.

“It’s the toughest budget we’ve had to put together since I’ve been mayor,” said Houston Mayor , who took office in 2016.

In Philadelphia, the mayor had to scale back his fiscal 2021 budget proposal in light of a deficit of some $650 million that he said is five times larger than what the city saw in 2009 in the aftermath of the recession.

The analysis didn’t assess the impact on specific cities. Rather, it calculated how expected unemployment in each of the 50 states will affect revenues overall in their municipalities. It combined that rate with assessments of the tax structures in each state. Those that rely on sales or income taxes are faring worse than those that rely on property taxes, according to the league.

The league also didn’t factor in aid to cities from states, which are facing their own economic crisis. Last week, California Governor announced the state is a $54 billion shortfall, roughly one-third of its annual budget. On Wednesday, New Jersey it will face a $10.1 billion budget gap through fiscal 2021.

The group said that the tax revenue losses for cities could eclipse what they saw during the last recession.

Anthony sounded an alarm about the pandemic’s impact on rural and small towns. Those cities are struggling with a lack of access to transportation and hospitals and a dearth of comprehensive services, he said.

Kentucky, for instance, is “getting hit in a major way in their rural communities,” he said.

“If any communities are facing a big challenge in America, it’s the small cities that may be wiped out, not only by the pandemic and the lack of access to health care,” Anthony said. “They’re being wiped out because of the loss of jobs to the small businesses, the loss of industry, and loss of hope.”