Workers inserted frames into infrared welding machines to form the zinc-powered batteries, each weighing as much as 275 pounds once filled with electrolytes. A shipping container holding 144 batteries—amounting to half a megawatt of storage capacity, enough to power roughly 50 homes—was destined for a solar-plus-storage project in South Carolina.

Batteries will be supported by a new 30% investment tax credit under the climate-and-tax legislation that became law in August. And the law’s tax incentives for sourcing batteries and materials from U.S. producers and allies encourage companies such as Eos, which established its factory in the Pittsburgh region’s once-prosperous steel-making valley that suffers from high unemployment.

The climate law “will be a catalyst for our business,” said Joe Mastrangelo, the company’s CEO.

The demand for large-scale energy storage—and an alternative to lithium-ion batteries that can catch fire and contain toxic, hard-to-recycle substances—has increased the company’s backlog of orders to $457 million, compared with $5 million three years ago, he said.

Virtually all of the 264-employee operation has been built this year. The company expects to double its hourly workforce in the next 18 months.

Large-scale batteries have long been a weak link in the renewable energy build-out. As solar and wind farms scaled up, developers built batteries to store excess power and dispatch it to the grid when the sun isn’t shining and wind isn’t blowing. 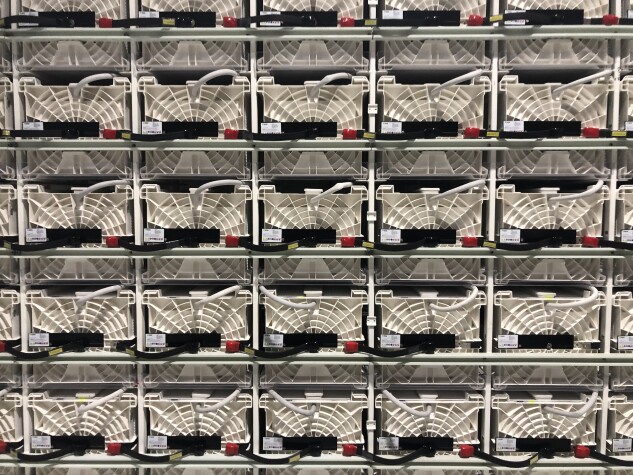 Most of those batteries have dispatched power for a maximum duration of two to four hours—often insufficient to meet demand as intermittent renewable energy feeds a greater portion of the electric grid.

The Biden administration is seeking to demonstrate longer-duration storage is possible at a lower cost. The Energy Department is advancing a $505 million initiative established by the bipartisan infrastructure law (Public Law 117-58) last year to extend battery duration to more than 10 hours.

Skeptics of electric battery storage point to a long road ahead.

“Most of the science behind LDES products won’t be ready for pilot-testing for years to come, with commercial production years beyond that—and that’s if everything goes right with the technology, costs and markets,” Wesoff wrote, highlighting 20 battery storage companies, including Eos, that have been attracting investors into an “irrational frenzy.”

Increasing the amount of storage itself within the battery “is a big key,” said Jane Montgomery, partner at ArentFox Schiff LLP.

“There are a lot of different technologies being proposed for that,” she said. “The federal funds are really key to encourage an investor to actually get out there and invest in those technologies.”

With that, new technologies could challenge the dominant chemistry that uses lithium and cobalt.

“A stand-alone tax credit does open the window, at least a little bit, for technologies that are non-lithium-ion cobalt because it shrinks the cost differential,” said Morten Lund, a partner for Stoel Rives LLP specializing in energy storage and renewable energy projects.

The credit is “important to let batteries integrate more efficiently into the existing infrastructure, because you can put them closer to the load demand and not be restricted to putting them where there is good sunlight and where there’s a lot of wind,” Howson said.

This month’s heat wave in California tested the grid, in part because renewable generation is such a high portion of the power supply, said Eric Dresselhuys, CEO of ESS Inc., an Oregon-based manufacturer of iron flow batteries that can deliver power for four to 12 hours.

Demand response—consumers voluntarily turning down power use—and existing batteries were able to keep the lights on this time, Dresselhuys said. But starting at about 20% renewables, he said, “the grid has a harder and harder time absorbing all of those renewables.”

During the California heat wave, there was a six-hour gap of insufficient energy to meet demand from 4 p.m. until 10 p.m.

“That number’s going to keep growing to eight to 10 hours,” Dresselhuys said. “That’s the problem we have to solve most urgently.”

Non-hydroelectric renewable energy made up about 40% of California’s total in-state electricity generation in 2021, according to the Energy Department.

About 80% of ESS Inc.'s supply chain is based in the US, and its chemistry doesn’t include critical minerals. In August, Energy Secretary Jennifer Granholm toured ESS Inc.'s facility in her first public appearance following the Senate passage of the climate bill (Public Law 117-169).

Last week in Pittsburgh, it was the Eos facility’s turn in the Energy Department spotlight.

Energy ministers from around the world walked through the facility while company officials explained the zinc-powered battery and its benefits to the grid and to the local community. The company employs hundreds from Pittsburgh’s Monongahela Valley, which is now trying to seize clean energy manufacturing opportunities.

The batteries are flexible so they can dispatch for a different number of hours per day, up to 15 hours per day. Last week, it completed its 200th battery.

The company sees growth from wind and solar developers but also from standalone battery projects to ease grid congestion, Mastrangelo said. It has also applied for a loan from the Energy Department’s Loan Programs Office, he said, which will allow it to scale up quicker.

“Now that we know how to do it consistently, now we can expand,” he said.

To contact the reporter on this story: in Washington at dmoore1@bloombergindustry.com

To contact the editor responsible for this story: at cmccutcheon@bloombergindustry.com