Congress has pumped out almost $3 trillion to deal with the coronavirus pandemic, mostly on a bipartisan basis. But there is a bruising election-year confrontation ahead over the next, and perhaps final, round of aid for the economy.

House Speaker is gathering a long and expensive wish list from her fellow Democrats that would expand the social safety net as well as provide at least $500 billion to struggling state and local governments.

Senate Majority Leader hasn’t yet committed to another big aid package and indicated that he’s girding for a massive fight over aid to states, a central issue for Democrats. He and other Republicans also say they want to tap the brakes on the blistering pace of new deficit spending. 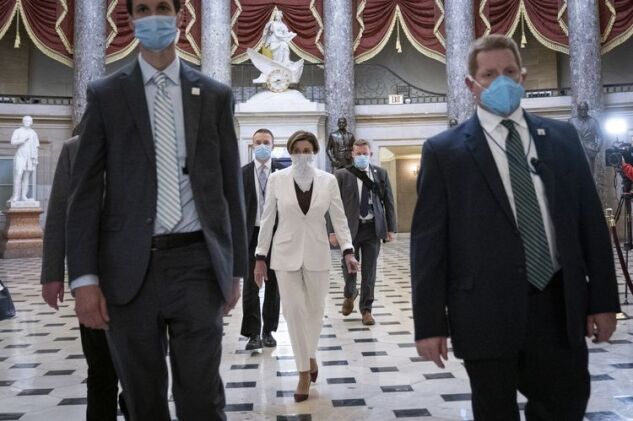 The next phase of economic stimulus likely will be the last before the 2020 elections, and any stalemate will escalate the political consequences with control of the Senate, House and White House at stake.

Democrats may have an unlikely ally: President . His re-election may hinge on the economy turning around in the last critical months of his re-election bid, and he’s indicated willingness to include state aid and other spending in another stimulus.

There is a risk that the effort to write a comprehensive rescue bill gets bogged down for months or falters given how far apart both parties are now as well as the increasingly bitter exchanges over what should come next and who will be to blame if the economy doesn’t rebound.

One of the biggest battles ahead will be over aid to state and local governments, which are seeing tax revenue plummet and expenses escalate as a result of the pandemic.

“We will move forward and there will be a bill and it will be expensive and I look forward to doing it as soon as possible because jobs are at stake,” Pelosi told reporters Friday. “There will not be a bill without state and local.” 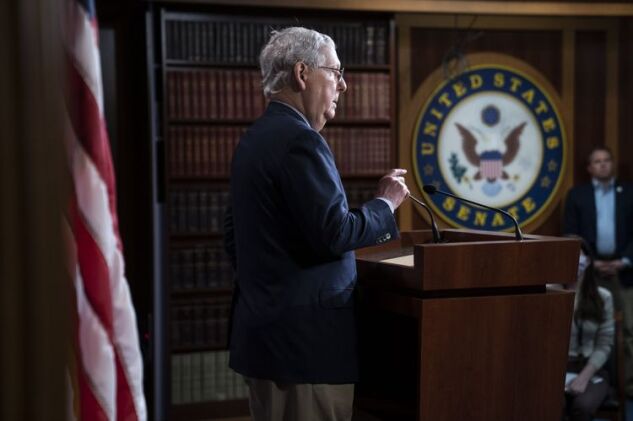 Mitch McConnell speaks during a news conference in the U.S. Capitol in Washington, D.C., on April 21.
Photographer: Sarah Silbiger/Bloomberg

McConnell drew a sharp line earlier this week by saying that states saddled with heavy public employee pension obligations -- mostly those with Democratic governors -- should be allowed to go bankrupt rather than use relief funds to right their budgets.

“We’re not interested in rescuing them from bad decisions they’ve made in the past,” the Kentucky Republican said Wednesday on Fox News.

His office highlighted his comments in a press release under the heading: “On Preventing Blue State Bailouts.”

The remarks prompted rebukes from governors, who are warning they will have to slash services without $500 billion in flexible aid. Cities and counties have asked for $250 billion as well, with the potential to affect the livelihoods of workers like police officers, firefighters, teachers, and their pensions.

At his daily briefing on Friday, New York Governor , a Democrat, ripped into McConnell for suggesting states should be allowed to go bankrupt and questioning whether they should get federal aid.

“It boggles the mind” that Congress would aid large corporations and not state and local governments, Cuomo said. He also said that New York puts more into the federal treasury than it takes back, while McConnell’s home state of Kentucky regularly gets more back than it sends in tax dollars to Washington.

Treasury Secretary , who was a key player in negotiations on the last two packages, said he’s had conversations with governors.

“For anything to get done it has to have bipartisan support in the House and the Senate and the president has to be on board with the strategy,” Mnuchin said in an interview with Bloomberg News on Thursday. “At the moment we’re focused on executing what is a very large amount of money that the Congress is in the process of approving.”

McConnell’s skepticism about state aid runs headlong into the plans of Pelosi and her leadership team.

After the last two relief packages started in the Senate and were negotiated with Mnuchin, she made clear that the House will act first on the next bill.

That will include a robust package to bail out states and local governments. Democrats also want extension of expanded unemployment benefits, expanded workplace safety protections for front-line workers, as well an infusion of funding for food-stamps.

Pelosi and Schumer are united on most of their core demands, which also include more health-sector funding and a “Heroes Fund” for federal payments of as much as $25,000 to health workers, grocery store employees and other essential workers.

“Our states and local governments are feeling the pain of slashed revenue from this pandemic,” said House Ways and Means Chairman , a Massachusetts Democrat who will draft much of the package. “Without our support, essential workers who have been risking their lives are at risk of losing their jobs.”

Republicans in both chambers want a more cautious approach on the next stimulus bill, and McConnell this week wouldn’t commit to completing it. House Minority Leader said Congress should slow down.

”We have not seen the effects of all this money going out,” McCarthy, a California Republican, told reporters on Wednesday. “The states are going to have money coming to them already. Let’s see what’s working, what needs more help. And let’s craft a bill based upon knowledge, data.”

Leaders in both parties are under enormous pressure to deliver on demands of core constituencies, both outside and inside the U.S. Capitol.

Four major unions allied with Democrats this week called for $200 billion for education, expanded Medicaid funding, and a federal backstop to help cover higher insurance premiums. The unions, which include the American Federation of Teachers and Service Employees International Union, also want an expansion of the Defense Production Act to bolster manufacturing in the U.S. of virus-related equipment and exemptions to allow union elections to be held electronically.

House progressives argue that all the previous stimulus bills were too modest in comparison to the crisis.

“I think it is important for us to say that incrementalism is not helpful in this moment,” said Representative a New York Democrat. “It is like putting a bandaid on an enormous wound.”

She and other House liberals want $2,000 cash payments to individuals that automatically recur until the crisis is over, a government guarantee of people’s paychecks, government assistance for water utility bills, a bailout of the U.S. Postal Service, universal access to health insurance, and aid to undocumented immigrants. There also are calls to expand work share programs to allow individuals to collect unemployment insurance while working part time, and to provide money to asylum seekers.

At the same time, Republicans are being urged by business groups like the U.S. Chamber of Commerce to continue providing relief for businesses and key industries, while the Club for Growth and other small-government groups encourage them to resist a big state aid package.

House Freedom Caucus Chairman , an Arizona Republican, and Senator , a Kentucky Republican, are among GOP lawmakers warning of a national debt crisis if all the spending continues.

“I don’t want to see this massive accumulation of debt destroy this great country,” Paul said Tuesday on the Senate floor. “My advice to the Senate and to the American people is let’s be aware of what we are doing by creating all this new debt, and let’s think before we jump to a terrible, terrible conclusion.”

Still, Republicans including Senator of Ohio have already said they want more state and local aid in the next package. So has Trump, who before the November election faces the prospect seeing states lay off millions of public sector workers or raising taxes in the middle of a steep recession because of the pandemic.

The fight over health care will also be fierce. The issue has been at the heart of the partisan divide for a decade, with Democrats looking to build on the Affordable Care Act and Republicans still in court seeking to have it overturned. The issue has become even more pressing however, with millions of newly unemployed Americans facing the prospect of losing their employer-sponsored health insurance during a pandemic.

Steven Dennis
Bloomberg News
Trump Puts One Bailout Watchdog on Hot Seat -- and Drops Another
States and Cities Crippled by Pandemic Push for Next Bailout
© 2022 The Bureau of National Affairs, Inc.
All Rights Reserved