Highly leveraged companies are taking a hard look at potential deals and financing strategies in an effort to soften the blow from restrictions on a popular tax deduction.

In one of the tax law’s few big revenue raisers, Congress curbed a break for debt financing that had helped fuel a spate of buyouts. Now bankers and tax professionals are surely using a different calculus when they pick acquisition targets, or talking up preferred equity and pursuing sale-leaseback arrangements as likely avenues to avoid the 2017 tax act provision, which effectively raises the cost of debt, including bonds that corporations already have.

“This is the kind of rule that galvanizes investment bankers into action,” said Robert Willens, a New York-based tax consultant.

Heavily indebted companies have been leveraging up in a decade-long, $11 trillion corporate debt boom, where low interest rates and easy money allowed them to fund big-ticket acquisition sprees. In the fight over the tax overhaul last year, the interest deduction was one of Corporate America’s top concerns.

While the break was just narrowed in the end, instead of being eliminated outright, the focus for dealmakers has shifted to coping with the fallout.

The law (Pub. L. No. 115-97) amended tax code Section 163(j) to cap deductions of business interest expenses at 30 percent of earnings before interest, taxes, depreciation, and amortization (EBITDA), effective for tax years beginning after Dec. 31, 2017. That measure of income narrows to just earnings before interest and taxes (EBIT) starting in 2022.

Although the restriction hits a fraction of a percent of U.S. companies, the Joint Committee on Taxation estimates it will rake in $253.4 billion in revenue over the decade spanning 2018 through 2027. For comparison, the JCT expects the tax law’s base erosion and anti-abuse tax to yield $149.6 billion in revenue over the same period. The BEAT is a 10 percent minimum tax—rising to 12.5 percent after 2025—intended to prevent big companies from shifting profits overseas through “excessive” deductible payments. 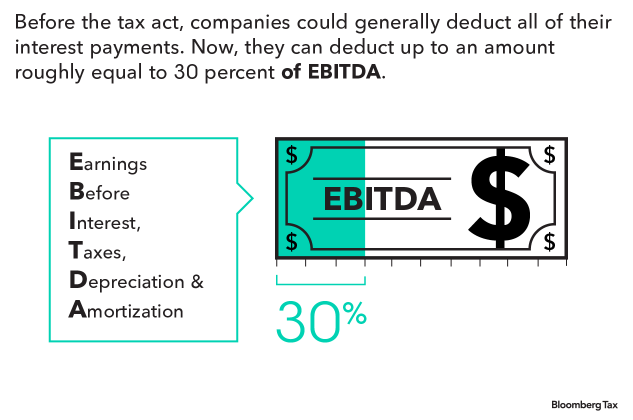 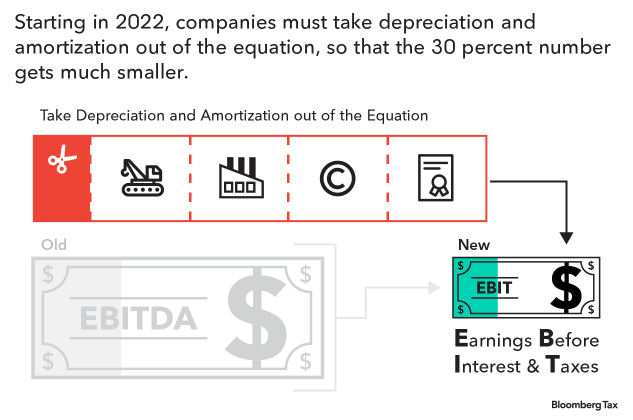 In April, the IRS released Notice 2018-28, offering a preview of its proposed interest deduction cap rules ahead of their release later this year. Practitioners largely said corporations are waiting for additional guidance before making any moves—but that hasn’t stopped them from planning and modeling in the meantime.
Corporate issuers are generally not deleveraging—contrary to expectations that the interest deduction limit would incentivize companies to do so—Morgan Stanley analysts wrote in a June report, citing a surge in business confidence. But a June Moody’s Investors Service survey of non-financial corporate issuers, most of which carried speculative-grade, or relatively low credit ratings, found that about three in 10 respondents said they would “adjust” their debt financing structures ahead of the looming switch to EBIT.

When Congress added Section 163(j) to the tax code via the Omnibus Act of 1989, it restricted debt interest deductions in an effort to curb erosion of the U.S. tax base through interest payments to foreign related parties.
Those rules put investment bankers and advisers to work, crafting ways for companies to preserve their deductions, Willens said.

“They have all that expertise in capital management and how to make sure a company has the best capital structure,” he said. “It’s a good way to earn fees, something the client would pay a lot for.”

Corporations may see a new incentive or different calculus when it comes to spin-offs, mergers, or acquisitions. More specifically, companies with high interest payments and low earnings considering options for an acquisition would gravitate toward the target with low debt and high EBITDA, Willens and others told Bloomberg Tax.

“That in turn would reduce the cost of the deal if you were going to free up interest deductions you wouldn’t otherwise have gotten,” Willens said.

Still, practitioners cautioned that amended Section 163(j) likely will sweeten transactions that ultimately yield lots of cash and either raise the deduction limit or help companies deleverage, rather than serve as a primary driver of the deals.

“I think on the margins you may see something happen where you could look at it and say, ‘Without the 163(j) limitation that might not have gotten done,’” said Benjamin Rippeon, a partner at Gibson, Dunn & Crutcher LLP in Washington who has experience in tax planning for corporate acquisitions and reorganizations.

Some deals that can boost EBITDA—and therefore the deduction cap—include reverse Morris Trust transactions, in which a parent company spins off a subsidiary and sells it tax-free to a third party, or a spin-off followed by an initial public offering of the spun-off subsidiary, in which the parent receives proceeds from the new shares, tax professionals said.

“I think it’s definitely worth pointing out that spinoffs are probably going to be more common,” especially reverse Morris Trusts, “because they’re so tax-efficient,” said Andrew Silverman, a Bloomberg Intelligence analyst who focuses on tax policy. The trend may not pick up speed for another couple of years, until the income measure narrows, but that adjustment to EBIT, he said, “will be the straw that breaks the camel’s back.”

The tax law was intended to incentivize a shift to equity financing from debt financing, and companies may simply do just that, practitioners said. But not all equity is created equal.

“Preferred stock is a kind of hybrid, if you will,” said Larry Axelrod, of counsel at Morgan, Lewis & Bockius LLP. Axelrod said he expects this form of equity to become increasingly popular under the new regime. “It stands below debt, but it stands ahead of common stock, so it’s a little safer.”

Preferred stock pays fixed dividends, mirroring the fixed interest payments debt holders receive, while its price can appreciate and its owners receive priority over holders of common stock. If the company is liquidated, however, bondholders will get their money back first.

Companies can use the proceeds of stock sales to pay off their debts, or exchange debt for equity, but the latter approach could be unpopular, said Larry Robbins, an attorney at Wyrick Robbins Yates & Ponton LLP in Raleigh, N.C.

“Just because it’s better for the company to potentially go to equity, doesn’t mean the lenders will want to go along with it,” as debt is safer and lenders get paid first, he said.

In a sale-leaseback, a company sells an asset it still needs, then immediately leases it over a specified time period—freeing up cash, while potentially even taking deductions for the rental payments.

“There are some financial engineering arrangements that look very similar to debt but they may not be labeled debt,” Rosenthal said.

To contact the editor responsible for this story: at mshreve@bloombergtax.com