Compiling tax reports for every country in which they operate is a mammoth task for multinational companies.
Photographer: David Kasnic via Getty Images

The evolution of international tax transparency is inevitable.

Unilateral legislative attempts have almost cleared the tax transparency high jump, for which the bar continues to be lowered over time.

Right in the middle of that evolution is the Country-by-Country Reporting standard.

The standard is a tabular form, or report, put out by a multinational enterprise disclosing tax-related information—including financial data. The report is meant to provide additional context into a company’s jurisdictional operations around the world, as well as information about the MNEs corporate social responsibility, tax and investment risk, and added value.

Nearly 20 years after the CbCR standard was developed, it is a critical building block in that evolution of international tax transparency, as it represents a tax disaggregation with potential insights into the tax affairs of MNEs.

However, there is continuing debate about the content, and use, of such information.

The Origins of CbCR

CbCR was formally conceptualized in 2003 as a proposed international accounting standard and an integral part of the applicable financial statements, rather than a tax standard.

The proposed standard envisaged foundational reporting elements, including public disclosure, reconciliation to the global consolidated financial statements, and jurisdictional consolidation. However, the proposal faced stiff opposition entering into a new era of transparency, and it would be another 12 years before it would be adopted.

The next 10 years ushered in global transformational changes, including international tax standards and systems, bilateral tax treaties, reliance on the digital economy, and the role of global and jurisdictional taxation. As a result, the OECD and G20 countries adopted a 15-point Action Plan for the Base Erosion and Profit Shifting initiative in 2013.

It wasn’t until 2015 that CbCR was formally adopted in the OECD’s final report on Action 13, “Re-examine Transfer Pricing Documentation,” which includes a requirement for MNEs to provide relevant tax administrations with information on their global allocation of income, economic activity, and taxes paid among countries according to a common template.

In its final report, the OECD made Action 13 effective for companies with a turnover exceeding 750 million euros ($850 million), and a three-tiered standardized approach was developed for transfer pricing documentation, consisting of:

CbCR requirements became effective for fiscal years beginning on or after Jan. 1, 2016. Compared to the 2003 vision for the CbCR standard, however, Action 13 represents an aggregation of reported items versus jurisdictional consolidation, and the absence of reconciliation to global consolidated financial statements.

CbCR information is filed in the tax residence of the ultimate parent entity, and generally shared between tax administrations through automatic exchange of information pursuant to the Multilateral Convention on Mutual Administrative Assistance in Tax Matters, bilateral tax treaties, or tax information exchange agreements. This information is subject to confidentiality provisions, aligned with the Convention.

Action 13 permits the use of CbCR as a tool to assess high-level transfer pricing risk, although not solely a source of conclusive evidence or substitute for comprehensive transfer pricing analyses by tax administrations.

The CbCR standard reflects conflicting views from different stakeholders about CbCR information. A reassessment of this standard was thus established for 2020, addressing the content, and reporting, of additional or different data.

It’s prudent to remember that CbCR data is useful as a snapshot and not in isolation. The transfer pricing activities, with related functions, assets, and risks in that jurisdiction are more clearly delineated in the local file and master file, which should be reviewed by the relevant tax administration(s) to gain a more comprehensive understanding. Accordingly, CbCR represents only one leg of a three-legged stool, representing a tool for tax administrations to perform a high-level transfer pricing risk assessment. 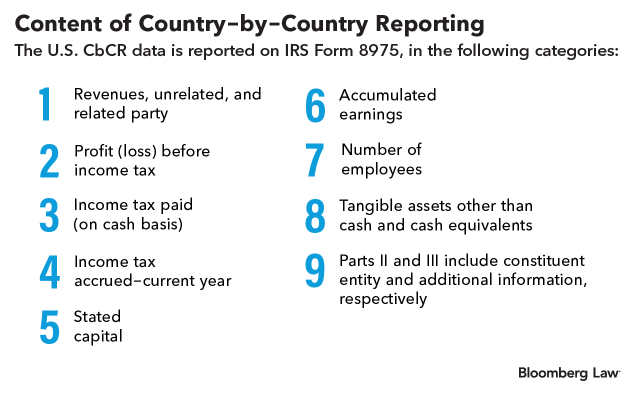 The EU, and unilateral attempts by several countries, including the U.K., France, and U.S., tried to change the course of CbCR that would result in the information becoming public.

In 2019 and 2020, the U.S. House of Representatives and Senate each passed identical legislation that would amend the Securities Exchange Act of 1934, directing the SEC to require public CbCR access. Additionally, a group of Democrats and Republicans sent a letter to the OECD advocating public CbCR data, enabling transparency. Future U.S. actions on this legislation are uncertain as a result of the upcoming presidential election, coupled with potential changes in membership of the House of Representatives and Senate.

Legislative activity advocating public transparency is expected to continue around the world, with ultimate passage in at least one jurisdiction. However, the form in which it is proposed, as an accounting standard/directive or a tax law/regulation, may dictate the timeliness for public access.

Meanwhile, the OECD has continued its efforts to educate MNEs and tax administrations in the intended use of CbCR through a handful of initiatives like risk-assessment workshops and guidance with a six-step checklist to follow prior to exchanging CbC reports. Annually, the required Action 13 peer reviews addressed gaps in the implementation of CbCR by members of the OECD/G20 Inclusive Framework.

As a follow-up to the public consultation document, questions and comments were discussed during the OECD virtual meeting held in May 2020, attended by various stakeholders, allowing time for further commentary.

The virtual meeting reiterated that CbCR is meant to be a high-level risk assessment tool and included position statements by various stakeholders for revising the 750 million euro ($850 million) reporting threshold for developing countries, that would generally suggest a lower threshold.

Commenters at the meeting also acknowledged the current OECD actions on Pillar 1 (taxation of a digital economy) and Pillar 2 (global minimum taxation), noting that the ideal result would be issuing corresponding CbCR changes as a one-stop process.

Pillar 1 will adversely affect the perceived transparency into CbCR reporting, due to formulaic allocation/apportionment provisions that are not perceptible as a jurisdictional piece of a complex global jigsaw puzzle. And the expectation is that the CbCR will be revisited by the OECD before the end of the year, anticipating potential alignment with discussions on Pillar 1 and Pillar 2.

There are a few possibilities for what could be down the pike for CbCR through 2022.
Prior legislative efforts indicate that CbCR data could become public. Ongoing transparency initiatives may, in turn, trigger efforts for similar access to the transfer pricing master file and local file.

It’s also possible that additional CbCR requirements will be legislated unilaterally, resulting in mismatches of information and additional complexity

A subset of CbCR data could become mandatory guidance promulgated by the Financial Accounting Standards Board, SEC, or other regulatory body. The FASB’s proposed update of the income tax disclosure framework would require all entities to disclose income tax expense/benefit from continuing operations disaggregated between federal, state, and foreign, whereas SEC reporting requires domestic and foreign disclosures.

A majority of respondents to the FASB proposal expressed a desire to expand the proposed disclosure of income tax expense/benefit to require country-by-country financial information. Related comments addressed the transparency of business activity, profits, and global tax transparency, similar to unilateral parliamentary efforts by several countries for similar disclosures.

But this information is not easily accessible in most enterprise resource planning (ERP) systems, thereby increasing the time, and complexity, of reporting disaggregated data efficiently. Essentially, the benefits of the proposal will outweigh the perceived complexities of reporting.

An entity’s local tax liability is determined using local generally accepted accounting principles (GAAP), which is usually different from the consolidated reporting GAAP. The pretax book income/loss, per statutory reporting, is generally the starting point to determine taxable income and the resulting tax liability. To the extent the CbCR applicable financial statement basis is different than local GAAP, a statutory to GAAP reconciliation is generally required as one of the first data requests by a tax auditor.

Tax administrations viewing the CbCR for one or several countries will look to match the local GAAP profit/loss with local tax liabilities recorded to arrive at the effective tax rate and other applicable ratios used for risk assessment.

MNEs may be asked to regularly provide this reconciliation when filing the report. However, statutory reports are filed several months after an entity’s year-end, sometimes with adjustments of amounts reported in that year’s consolidated financial statements. As a result, this is a complex and time-consuming process for MNEs to perform such reconciliations in a timely and accurate fashion.

Intercompany sales between legal entities in the reporting group are currently included in CbCR, whereas such sales, including relevant income taxes, are generally eliminated in consolidated financial statements to avoid double counting. Without accounting for such eliminations, the sum of the jurisdictional amounts reported in CbCR will be overstated.

Additionally, the consolidated reconciliation is useful to ensure the accuracy of jurisdictional data. However, this elimination data generally does not efficiently reside in an ERP system, by entity and/or jurisdiction. As a result, this is usually a very time-consuming and arduous task for MNEs, with no significant value add.

This reconciliation will generally be a requested item by tax administrations and stakeholders in the public domain, as the total is easily reconciled to the consolidated financial statements.

Net debt could replace stated capital, which is generally not representative of the MNEs activities in that jurisdiction.

Stated capital of a particular legal entity may be prescribed by local law, which may vary by industry type. It is generally difficult to reduce or distribute such capital efficiently going forward. However, debt is generally an effective tool to redistribute within the group and is an effective mechanism for interest expense to reduce operating income, and local taxes, depending on deduction limitations.

The debt-equity ratio, determination of balance sheet leverage, and related ratios will be used by analysts and readers of financial statements to assess operating performance and business risks. Therefore, net debt is a more useful gauge for risk assessment than the current stated capital disclosure. The placement of debt within a related group of entities would also be useful in reviewing risk and the group’s tax efficiencies.

Author Information
Keith Brockman is a CPA, CGMA, and authors a Best Practices international tax blog at strategizingtaxrisks.com. He is a frequent presenter at international tax conferences, having over 30 years of experience as a corporate tax executive. He has served on tax committees in the U.S. and Europe with Tax Executives Institute and Manufacturers Alliance for Productivity and Innovation.

To contact the editors responsible for this story: at rdaigle@bloombergindustry.com; at skassam1@bloombergtax.com