Sales by Walmart and other online retailers have boomed in the pandemic's stay-at-home months, reaping states their only revenue bright spot thanks to the Supreme Court's "Wayfair" decision, which permitted taxes on sales by remote vendors.
Photographer: Andrew Harrer/Bloomberg via Getty Images

States are struggling, with tax collections having nosedived as much as 50% in the fallout of the coronavirus pandemic. But there is a silver lining that wasn’t available in earlier economic downturns.

Thanks to the U.S. Supreme Court’s groundbreaking Wayfair decision, handed down almost exactly two years ago, states are collecting billions of dollars on e-commerce sales that were previously uncollected.

In the South Dakota vs. Wayfair ruling, issued June 21, 2018, the Supreme Court tossed out its 25-year-old physical presence standard limiting state collection of taxes from out-of-state vendors. The decision led to tax collection-and-remittance requirements on remote sellers and marketplace facilitators based on their level of economic activity in a state. Now all but two of the sales tax states are doing so.

States with a sales tax rely heavily on it: Sales and personal income taxes combined represent about 75% of all state general fund revenue collections. Overall sales tax revenues are down because 95% of the country—including most brick-and-mortar businesses—was shut down because of the virus. But e-commerce sales have surged, with U.S. online retailers year-over-year growth up by as much as 128% in recent weeks.

“The ability to collect sales taxes on remote commerce is more important than ever, because states need all the money they can get,” said Jared Walczak, director of state tax policy at the Tax Foundation. 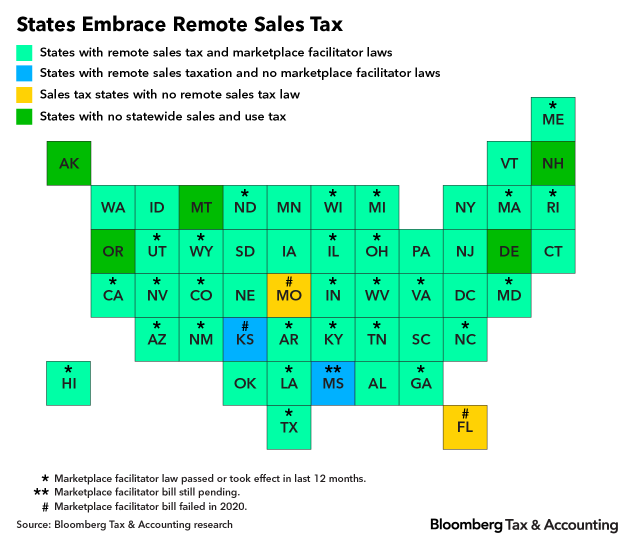 Economic modeling by Moody’s Investors Service estimates the pandemic would cut state tax collections 15% for fiscal year 2021, a loss of up to $200 billion when compared against collections in FY 2019. The Moody’s model shows state tax collections won’t rebound to FY 2019 levels until FY 2024, unless the states enact tax increases.

An analysis by Jeff Clemens, a professor of economics at the University of California-San Diego, shows the biggest losses will be seen in the states’ two largest revenue sources, sales taxes and income taxes. Losses from the two sources are expected to climb to roughly $110 billion for FY 2021.

And its going to get worse in the coming months, according to the National Association of State Budget Officers. Declines in state tax collections are forecast to well exceed the 11.6% drop states experienced during the Great Recession, with some states anticipating declines of more than 20%, NASBO said.

The lawsuit’s lead plaintiff and namesake, Wayfair, a Boston-based home furnishings retailer, announced record sales for the first quarter of 2020 and a record number of new customers using its online sales portal.

Sales on online marketplaces like those run by Walmart, Amazon.com Inc., Etsy Inc., and eBay Inc. are increasingly important given that more than 40 of the 45 sales tax states are now imposing their collection-and-remittance requirements on these big online platforms. Most marketplace facilitator laws were approved or took effect in the last 12 months.

The adoption of remote sales tax and marketplace facilitator laws hasn’t been without its growing pains.

Food delivery providers and other gig-economy companies are petitioning states to be exempt from marketplace laws. Meanwhile, telecommunications companies are pushing for amendments allowing them to negotiate with marketplace facilitators on who has the collection obligations. They say they have historically collected such taxes and fees as the 911 fee and the Universal Service Fund, and they’re better at it than the marketplaces.

But in March, Multistate Tax Commission member-states turned back an AT&T effort to urge states to adopt a model law proposed by the National Conference of State Legislatures that would allow companies with more than $1 billion in sales to collect and remit taxes in lieu of facilitators.

States want to sit back and see how their marketplace facilitator laws shake out before making any adjustments to them, said Richard Cram, national nexus program director with the MTC.

For Missouri and Florida, however, the Covid-19 recession could prompt a change of heart. They are the only two states that so far have sat out collection of sales taxes on remote sellers.

“There is going to be pressure for them to move forward given the significant revenue impact on their budgets,” said Jamie Yesnowitz, a principal and state and local tax practice and national tax office leader at Grant Thornton LLP. “In this type of environment a revenue stream that could be in the tens to hundreds of millions of dollars can’t be ignored.”

If efforts are made, however, “I don’t know whether additional audit enforcement is going to bring in significant revenue” for the states, Stephen Kranz, partner with McDermott, Will & Emery, a tax lawyer who has represented Microsoft and Apple, told Bloomberg Tax. “We saw a 100 percent economy go to near zero; states are not going to get that back through sales audits.”

As the pandemic era gives way to more regular business, some longer-term concerns and challenges may start to bubble up for consideration.

A primary concern of sellers has been the patchwork of state and local sales tax models and minimum sales thresholds for triggering a remote tax obligation. Many follow the South Dakota model of $100,000 in sales or 200 transactions into a state annually—which the Supreme Court ruling suggested would be acceptable constitutionally. A handful have no transaction thresholds.

Kansas has no threshold at all, a fact that may make that state’s law the first target of legal challenge against remote-seller taxes, Walczak suggested.

Scott Peterson, vice president of government relations at the tax software company Avalara, expects to see simplification in states like Louisiana, Colorado, and Alaska, which could increase centralization of returns for both state and local governments. In fact, he expects that model to be a success.

“And I expect them to broaden that to make it easier for retailers in general,” he said.

MTC’s Cram said states may ask whether the threshold dollar figure should rise with inflation or fall as it becomes easier for smaller businesses to comply.

It’s possible, too, that states will want to make more certain of revenue collection in the way tax authorities around the world are doing to fight value-added tax fraud and bring in billions in currently unpaid taxes—using computerized real-time reporting and collection systems.

“This is about states saying give me my slice of the pie as quickly as possible,” Avalara’s Liz Armbruester said. “I don’t want to wait 30 or 60 or 180 days after the transaction to collect my money.”

A further ramification of the Wayfair ruling that has yet to play out significantly is expansion of the economic-presence concept to areas other than sales taxes—to company taxes, for example.

“Our expectation was that a lot more states would jump on the bandwagon and impose economic nexus rules for their corporate income taxes and do that in a manner that would encourage a convergence of the sales tax and the income tax nexus rules,” Yesnowitz said. “We haven’t really seen it due to the pandemic. We will be watchful to see if that changes in the summer and the fall when legislatures come back.”