Greg White spent the typically slow week between Christmas and New Year’s preparing for what could be a January storm: as many as 500 clients who might need his small Seattle accounting firm’s help submitting applications for another round of federal relief loans.

White is hopeful, however, that this round of applications will go more smoothly than last spring, when accountants triaged navigating panicked business owners through a massive government program that had few rules and unprepared lenders. Congress injected $284 billion more into the Paycheck Protection Program in a bill signed into law Dec. 27, and added a few new twists to the second phase of the loan program intended to help small businesses shuttered and still struggling from the pandemic.

“People are going to be very eager to get their hands on that money as quickly as they can,” said White, a shareholder and founder of WGN PS. “It was a gold rush last time. It was a dog fight to get at that money.”

Nearly half of small businesses would apply for a second PPP loan if eligible, and 22% of borrowers have or expect to have to lay off staff in the next six months, according to an early December survey of nearly 600 members of the National Federation of Independent Business. 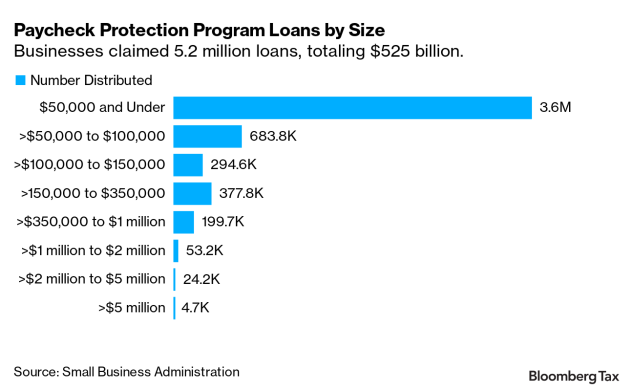 Many of White’s clients are in the commercial fishing industry, ranging from large, industrial operations to small “mom and pop” companies. Those providing fillets used in grocery store staples have done well this year, but those delivering fresh catches to eateries have struggled alongside their restaurateur customers.

White sent an email last week urging clients to start preparing even as they wait for updated application forms and guidance on how to apply under altered requirements from the Small Business Administration and Treasury Department. Only a few responded initially, but White said he expects that to pick up soon.

The law provides additional loan relief for restaurants, allows businesses to deduct from their taxes expenses they paid with the loans, caps the size of businesses that could seek the relief, and simplifies the loan forgiveness process, among other measures.

The application form and guidance could be available as soon as this week, and loan applications could start rolling out the second week of January as what’s known as PPP2 goes live, said Erik Asgeirsson, president and CEO of CPA.com.

Firms should prepare for “an intense period” and begin talking to their clients, update engagement agreements, and upload as much information and documentation as they can now, Asgeirsson suggested.

“It’s going to be a fast start to the year,” said Asgeirsson, the point person for the American Institute of CPAs’ response to the loan program.

Still Asgeirsson said this rush of applications should be an easier lift this time. The updated program builds on the existing PPP framework, and payroll processors have reports ready for companies to use.

He encouraged firms to take advantage of existing software and resources to calculate the payroll and other information needed to submit the loan applications. Among those options: the AICPA’s own cloud-based tool, which has been updated to reflect the new law, rather than building new tools and calculators internally.

A Not So Quiet Holiday

For some CPA firms, the January rush started early.

Phone calls and emails picked up during what normally was a week off for the CPAs of Sensiba San Filippo LLP. Clients wanted to know whether they qualified for the updated PPP loans—a glimpse of the busy month to come, said Frank Balestreri, the firm’s partner in charge of its consulting practice, tasked with overseeing its PPP work.

Balestreri was supposed to be on vacation, instead he spent the holiday week updating his firm’s web portal and talking with bankers to find out which will accept applications and how soon.

“It’s first come, first serve. And when the money runs out, it’s like musical chairs. You don’t want to be the last man standing,” he said.

The San Francisco-based firm serves clients in the hospitality, construction, and services industries including a home shutter seller reeling from on- and off-again shutdown orders and a restaurant supplier that typically works with the corporate kitchens that feed Silicon Valley’s armies of tech workers.

Balestreri said he is waiting to put out a webinar until he gets guidance on some key concepts of the updated loan program, including a new limitation that an applicant’s gross receipts must have declined at least 25% compared to the prior year. Those details will matter to businesses who might be near that threshold, and the method of accounting they use to manage their company could also come into play.

Without those additional details, PPP2 could be at risk for the same confusion that frustrated the initial rollout of the program.

“We have this 5,000-page document that’s out there but somebody still has to translate that,” Balestreri said. “We need to see a loan application. We need to understand exactly how this concept of gross receipts will be interpreted.”