Lawmakers are continuing to debate a path forward on the next virus relief package.
Photographer: Al Drago/Bloomberg via Getty Images

President repeated his opposition to Democrats’ bid to add money for hospitals and localities to his administration’s latest $250 billion stimulus plan, deepening the standoff over new efforts to bolster the economy frozen in the grip of the coronavirus pandemic.

“I’m certainly OK with helping the states and helping the hospitals,” Trump told reporters at the White House Friday. The president added that he’d rather do it in the expected next phase of the economic response.

Trump said in that measure he’ll be seeking spending for infrastructure and a payroll tax moratorium -- both of which face some opposition among Democrats or Republicans in Congress.

“There’s no reason why we can’t come to a bipartisan agreement by early next week,” Schumer said in a statement.

After Schumer released his statement, Senate Majority Leader tweeted that “I hope Democrats stop blocking more funding for the Paycheck Protection Program very soon. American jobs depend on it.”

Pressure will be on Congress to approve more stimulus at a time when more than 16 million Americans have lost their jobs over the past three weeks as the country shuts down. The political fallout could be severe if voters place the blame on either party for stalling aid.

There still is a question about how quickly Congress could act, with most lawmakers out of town and approval of additional aid needing unanimous support in both the House and Senate. A single objection could derail the process.

There had been no immediate negotiations among Schumer, McConnell, Pelosi and other top leaders after Democrats on Thursday rejected McConnell’s bid to pass a $250 billion supplement to the Paycheck Protection Program for small businesses. Mnuchin had requested approval of the funds by week’s end.

Pelosi, in talking with Mnuchin Friday, repeated her stance that a new aid package needs to help small businesses in “underserved areas” get access to loans, and that it must include new funds for hospitals and state and local governments, said her spokesman . 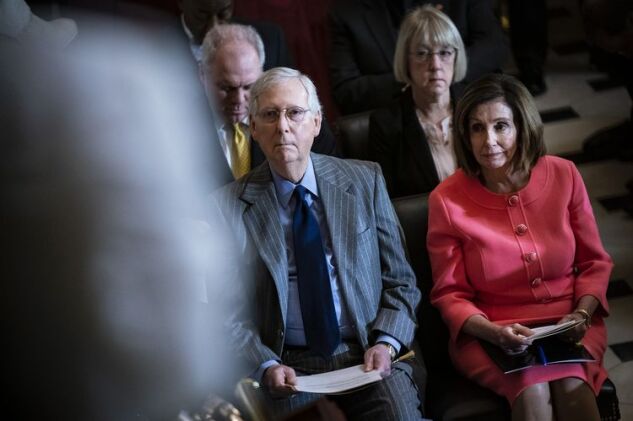 Hospitals and localities “are hemorrhaging money and paying for the coronavirus costs,” Pelosi said Thursday on CNBC’s “Mad Money” program. She said there’s “plenty of room for negotiation.”

If leaders find a path forward, Monday may be the next chance to quickly approve more aid in the Senate without objection. Lawmakers aren’t scheduled to return to Washington until the week of April 20. It’s not clear that congressional leaders will keep to that date if most of the country remains shut down.

In Thursday’s Senate debate, McConnell argued that the original $350 billion small-business program is the only part of last month’s massive $2.2 trillion coronavirus rescue plan at immediate risk of a shortfall. He accused Democrats of trying to add other categories of funding that could be addressed later in a larger package.

“We need more funding and we need it fast,” McConnell said on the Senate floor. “The country cannot afford unnecessary wrangling or political maneuvering.”

Democratic Senator of Maryland, a co-sponsor of the small business Paycheck Protection Program, objected to the majority leader’s proposal. The program hasn’t run out of money but others have, Cardin said, adding the small business loan process needs to be streamlined.

A little more than half of the $350 billion designated for the small business loan program has been committed in the week since lenders began accepting applications.

By Friday morning, about 587,000 applications had been processed totaling more than $151 billion from more than 4,100 lending institutions, according to the Small Business Administration. That amount hasn’t been given to businesses yet, but rather is the value of loans registered for lenders to complete the process and disburse funds.

The proposal by Pelosi and Schumer also would bolster food assistance and ensure that small businesses are able to borrow from community-based and other financial institutions that serve companies owned by farmers, families, women, minorities and veterans.

Democrats want a broad pool of lenders to work with small businesses to prevent some companies from being left behind, she said. To accomplish that, her party wants to ensure that half of the new PPP funds can’t be used for loans made by big banks.

“There is a disparity in access to capital in our country,” Pelosi told reporters. “We do not want this tragedy of the coronavirus to exacerbate that disparity or to solidify it.”

Democrats are concerned that businesses with fewer traditional banking ties could miss out, she said.

“Secretary Mnuchin called and asked for a quarter-of-a-trillion dollars in 48 hours with no data,” said Pelosi, adding that Democrats want to “figure out what the numbers are and where they are needed most urgently.”

There have been complaints of bigger banks only dealing with their existing customers.

Over the past week, borrowers said they were turned away by banks when they didn’t already have a lending account. Banks have been wary about quickly approving loans for new customers and blame time-consuming federal rules requiring them to verify customer identity to catch terrorists and money launderers.