President Joe Biden, shown above during a visit to a small business in Washington, D.C., proposed a variety of business tax changes to pay for his spending plans. But Democrats appear hesitant to touch one of the 2017 tax law's broad business breaks.
Photographer: Yuri Gripas/Abaca/Bloomberg

Democrats who have spent the past four years railing against the 2017 tax code overhaul appear hesitant to roll back one of that law’s broad business tax breaks.

That reluctance is underlined in the White House’s plans to pay for trillions in infrastructure and social spending. President Joe Biden has called for sweeping corporate and individual tax changes, but shied away from touching a temporary write-off of up to 20% for partnerships, LLCs, and other entities taxed only at the individual owner level.

Washington lobbyists say the optics of clawing back a tax break available to small business likely makes this a fight the administration isn’t interested in picking right now. The White House will need to hold together a razor thin Democratic majority in Congress to advance its economic plans and two House Democrats—Reps. Henry Cuellar (Texas) and Josh Gottheimer (N.J.)—have backed legislation to make the tax break under Section 199A permanent.

The White House is already facing pushback from moderate Sen. Joe Manchin (D-W.Va.), and pressure from House Democrats who say they won’t support sweeping tax and spending legislation unless it includes a repeal or increase of the deduction cap on state and local tax payments. While some observers think the pass-through business deduction could emerge as an alternative “pay-for” in infrastructure negotiations, going after the tax break could muddle the messaging that Biden’s proposals are paid for by tax hikes on big business and the wealthy.

“Putting something like that in clearly opens members up to the accurate claim that it’s a massive tax increase on small businesses,” said Sage Eastman, a senior Republican strategist at the lobbying firm Mehlman Castagnetti Rosen & Thomas.

Biden said during his presidential campaign that he supported phasing out the write-off, which is currently scheduled to expire after 2025.

“A number of Democrats will want to proceed cautiously and assess how any tax changes would impact small business constituents in their districts,” said Siddiqui, now a partner at Akin Gump Strauss Hauer & Feld LLP.

Proponents of the deduction say it helps level the playing field between C corporations—which are taxed at the entity level and individual shareholder level—and pass-through business owners after lawmakers cut the corporate rate to 21% from 35% in 2017.

“It’s like when somebody is shot and the bullet is lodged somewhere close to a critical organ, and the doctor said, ‘We’re just going to leave the bullet in, because it would be too risky to pull it out, and maybe it’s the only thing keeping the patient alive,’” Tom West, Treasury’s deputy assistant secretary for domestic business tax, said at a virtual conference earlier in May.

The decision to leave the deduction out of Biden’s proposed corporate tax overhaul caught some on Capitol Hill off guard, since influential Democrats have been vocal about their desire to go after a tax break they view as a giveaway to the wealthy.

“I think we were surprised when the administration rolled out their plan that there wasn’t a 199A adjustment,” said Elle Collins, tax counsel for House Ways and Means Republicans. 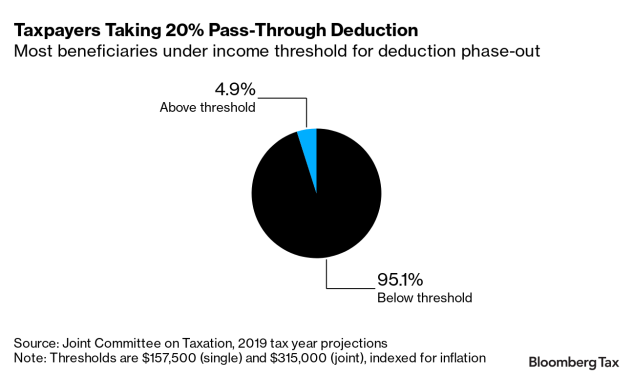 Some within the Democratic camp, such as Senate Finance Chairman Ron Wyden (D-Ore.), still have interest in changing the way the deduction currently works.

“The pass-through deduction is a giveaway to the wealthy,” Wyden said in a statement to Bloomberg Tax. “It was sold as a benefit for middle-class small business owners when half the benefits go to millionaires. I’m looking at ways to revamp the deduction to ensure it’s not just a giveaway to the top.”

An April 2018 report from the nonpartisan Joint Committee on Taxation projected that more than half the benefits of the write-off—$31.6 billion worth—would flow to people making $1 million or more in 2024.

Victor Fleischer, a former chief tax counsel for Senate Finance Committee Democrats, said he could see lawmakers and the Biden administration revisiting 199A as a potential revenue raiser for infrastructure as they begin to compromise on other parts of the plan.

A White House official said in an emailed statement that the administration “welcomes additional ideas” for financing infrastructure investment, “so long as the abide by the President’s commitment not to raise taxes on anyone making less than $400,000.”

Business groups, including the S Corporation Association and the National Federation of Independent Business, are mobilizing in support of the 199A deduction.

The U.S. Chamber of Commerce said it would give lawmakers points for a score of their business-friendly voting history if they cosponsor legislation (H.R. 1381, S. 480) that would make the temporary tax break permanent.

The NFIB will ask its members to talk to their representatives in Congress about the importance of preserving the deduction, according to Kevin Kuhlman, the trade group’s vice president of federal government relations.

Kuhlman said the group has already reached out to members of the New Democratic Coalition, a group of centrist House Democrats, to discuss the tax break.

“There is definitely sympathy there,” Kuhlman said.

—with assistance from Michael Rapoport, Allyson Versprille, and Colin Wilhelm.