Democratic Senate candidates, Jon Ossoff, left, and Raphael Warnock, at a 'Get Out The Vote' event in Jonesboro, Georgia on Nov. 19.
Photographer: Dustin Chambers/Bloomberg

Democrats won control of the U.S. Senate for the first time in six years with victories in two runoff races in Georgia -- a stunning result in a state that hadn’t sent a new Democratic senator to Washington for two decades.

unseated incumbent Republican and defeated appointed GOP Senator in Tuesday’s special election, according to the Associated Press. Neither Republican had won a majority on Nov. 3, forcing the runoffs two months later. 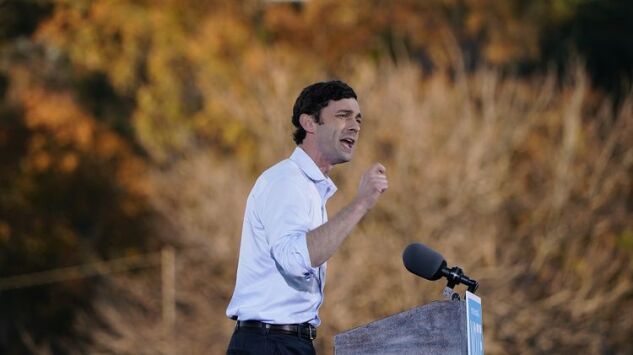 Watch: Democrats won control of the U.S. Senate for the first time in six years with victories in two runoff races in Georgia.
(Source: Bloomberg)

The race call came amid chaos in the nation’s capitol as supporters of President stormed the U.S. Capitol and disrupted lawmakers who were meeting to certify the November election for President-elect .

The double win marked a final setback for Trump in his efforts to turn the election his way, including his urging protesters to “cheer on” those challenging the election, and only telling them to retreat after they broke windows in the Capitol and forced members of Congress to barricade in the chamber.

Republicans said his challenge of the election results had cost the party two Senate seats.

“It turns out that telling the voters that the election is rigged is not a great way to turn out your voters,” said Utah Senator , a longtime Trump antagonist.

North Dakota Senator said Trump’s message wasn’t “helpful” for turnout, but he also noted that his party should have noticed Georgia’s politics were changing.

“We didn’t just wake up to that, obviously,” he said. “Senator Perdue has sounded that alarm for at least two years.”

Turnout in Republican counties didn’t match the enthusiasm among urban, suburban and Black Democrats who turned out in greater numbers even than in November.

The Democrats’ victory means a 50-50 split between Republicans and the Democratic caucus, with incoming Vice President casting tie-breaking votes and conferring control of the chamber.

In a tweet, Biden said he called Warnock and Ossoff on Wednesday morning “to congratulate them on their hard-fought campaigns. Georgia voters delivered a resounding message yesterday: They want action on the crises we face and they want it right now.”

Biden’s party will hold the gavels in both the House and Senate, with the first Democratic trifecta, including the White House, in a decade. Senator of New York is set to become majority leader, reducing the scope of Republican leader to stymie Biden’s agenda and personnel picks. 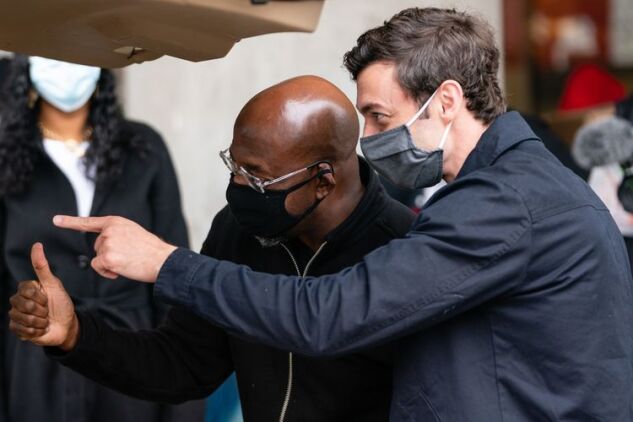 The victories by Ossoff and Warnock, who will be the first Black U.S. senator from Georgia, were propelled by record turnouts in the Southern state and mark a major shift in Georgia politics. That follows Biden’s narrow win there in November -- the first time Georgia voted for a Democratic president since 1992.

Nearly half of the state’s votes come from the Atlanta metropolitan region, and Democrats have been gaining in the diverse, fast-growing suburbs that ring the city. , a Democrat, had come tantalizingly close to winning the governorship in 2018, and much of that campaign infrastructure remained in place.

While Biden can now escape a blizzard of subpoenas from Republican Senate committee chairs intent on digging further into his son ’s financial dealings, the narrow margin of Senate control will limit Democrats’ ability to deliver on the most ambitious agenda items.

Centrist Democratic Senator of West Virginia has already pledged to oppose any effort to abolish the filibuster, a requirement for 60 votes to proceed with most legislation. Unless he and other Democratic skeptics of ending the practice change their minds, Biden would have to rely on special budget rules that allow only certain spending, tax and debt limit bills to pass with a simple majority.

Biden and Schumer will have to manage a Senate that has an energized liberal wing including of Massachusetts and of Vermont along with more moderate figures like Manchin and Arizona’s . House Speaker , who saw her Democratic majority narrowed in November’s election, similarly has to balance the initiatives of progressives like of New York with those of the moderates who will be facing voters again in November 2022.

Representative of Florida, co-chair of the Blue Dog Coalition, cautioned that the Democrats’ majority makers mostly come from swing districts and tend to be more moderate. Blue Dogs were a key brake on President ’s agenda in his first two years, insisting on a pay-as-you-go law in an effort to keep the lid on the deficit.

As in 2009, the battle for another economic relief package will provide an early test, though back then Democrats had far larger majorities in both chambers.

Budget-related legislation using so-called reconciliation rules could be used as vehicles for other Democratic priorities, like a public health care option for the Affordable Care Act, climate measures and a progressive rewrite of the tax code.

Yet many other agenda items, such as gun-control measures, federal codes for voting rights, higher minimum wages and new family-leave regulations, would likely fall by the wayside with the filibuster intact.

Democrats will also be under pressure to deliver finally on a comprehensive immigration overhaul after decades of false starts, with the scope and shape of such a bill dependent in large part on whether they need Republican votes.

To contact the editors responsible for this story:
at kklimasinska@bloomberg.net