A tax debate in Maryland over Facebook and Google’s biggest revenue stream is setting the stage for broader arguments over state authority to tax a wider swath of commerce occurring over the internet.

The U.S. Chamber of Commerce and three other trade associations filed suit last month to strike down Maryland’s recently passed tax on digital advertisements, arguing the first-of-its-kind levy violates the Internet Tax Freedom Act by imposing “discriminatory taxes” on e-commerce. The action has renewed debate over states’ rights and what the federal government can prevent from being taxed by individual states, according to several lawyers and academics.

There’s a “pretty good chance” the court would agree with the argument over the Internet Tax Freedom Act, but “there’s also a chance—maybe a little slimmer—that a judge says the internet tax law is unconstitutional, “said Chris Moran, Baltimore-based tax attorney at Venable LLP.

Maryland’s pioneering tax (H.B. 732) levies up to 10% of revenue from digital ads and will impact tech giants such as Google and Facebook. A fiscal analysis drafted by Maryland’s Legislature estimated the tax to generate $250 million annually.

The digital ad space is the latest tax battleground for municipalities, which have increasingly been moving to add millions to their coffers by such as online sales, and to a lesser extent streaming services, which has been referred to as a “Netflix tax.”

The lawsuit is being closely watched by other tax hungry jurisdictions, some exacerbated more than others due to the pandemic. Since Congress passed the internet tax law in 1998, placing a moratorium on taxing internet activity, annual digital ad revenues have swelled—from $1.92 billion in 1998to $124.6 billion in 2019—a marked increase. 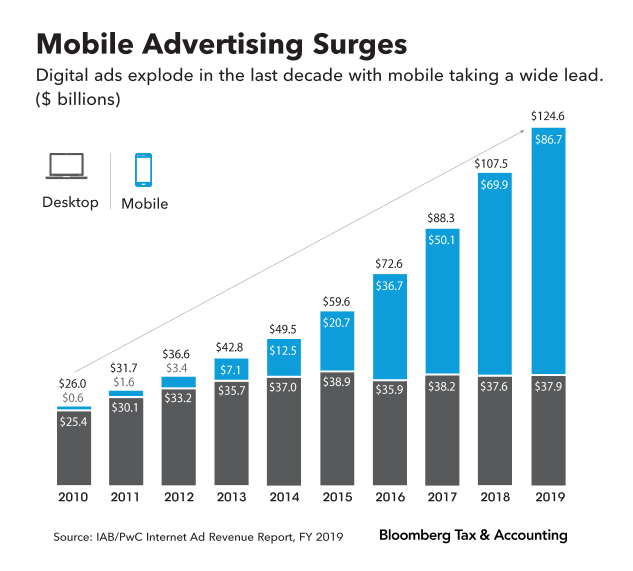 States including New York, Montana, Nebraska, West Virginia, and Washington have been debating bills imposing tax programs similar to the one approved in Maryland.

There was considerable debate over the constitutionality of the internet tax law while it was debated in Washington, but that issue was largely ignored because taxes on internet access were rare and Congress chose to grandfather the half-dozen states that imposed surcharges, said Joe Huddleston, Washington, D.C.-based managing director of indirect tax at EY LLP and a former executive director of the Multistate Tax Commission.

The challenge to the internet tax law could come from the state of Maryland itself, with other states possibly joining as amicus parties, according to Phil Horwitz, Denver-based director in the state and local tax practice at the accounting firm Moss Adams, and a former director of the Office of Tax Policy Analysis in the Colorado Department of Revenue. Is the internet tax law “vulnerable to a 10th Amendment attack? I think some of the states feel it could be,” he said on the argument over states’ rights.

Should the internet tax law be unconstitutional, “it would be a sea change in state tax administration” because it would call into question other federal legislation preempting state tax policy, as well as influence the direction of such legislation as the proposed Mobile Workforce Act, he said.

Online sellers and digital marketplaces such as Amazon, eBay, Etsy are still adapting to the U.S. Supreme Court’s 2018 ruling in South Dakota v. Wayfair, which permitted states to impose tax collection duties on remote retailers based on economic activity in a state rather than physical presence. The high court suggested strongly that South Dakota’s sales tax law, which included economic presence standards to bring remote sellers into its tax code, would pass constitutional muster. As a result, to date 43 of the 45 sales tax states tax online sales in various ways.

“In Wayfair, all the justices assumed that Congress has the power to administer one uniform solution, although it obviously has not yet,” Darien Shanske, a tax law professor at the University of California at Davis, said.

The same year as Wayfair, the Supreme Court overturned a federal ban on sports betting in Murphy v. NCAA, based on a 10th amendment challenge. The court said Congress had no authority to prevent states from passing their own laws.

There is a long list of federal laws limiting state taxation of industries including railroads and air travel, he said. These laws represent “uncontroversial and appropriate exercise of Congress’ Commerce Clause authority” by the high court, Friedman added.

If the internet tax law were to be formally challenged, a lawsuit could play out more in line with Murphy, Moran said.

States read Murphy as “an invitation” to challenge more recent federal government preemption of state tax policy, and that might extend to decisions of whether to impose a variety of taxes involving the digital economy, Horwitz said.

Meanwhile, imposing the digital tax levy could be delayed if the House passes an emergency bill (S.B. 787) that shifts the start date from 2021 to 2022. The bill unanimously passed by the state’s Senate earlier this month and would exempt news media and prevent companies from passing the tax down to customers.

Any change in the implementation date, however, merely delays an “inevitable” showdown between the states and big tech companies, Huddleston said.

“It was almost inevitable we would get to this point, I suspect, simply because of the gap in tax structures that didn’t really reach these kinds of transactions,” he said.