Tax collections will fall by more than 30% in at least 10 American states due to Covid-19, according to a new report from researchers at Arizona State and Old Dominion universities.

On average, states will suffer a 20% decline in tax revenue, the economists predict. and have already reported sharp declines, while is implementing higher taxes on corporations to help deal with the revenue shortfall.

Budget shortfalls are forcing state and municipal authorities to cut jobs and spending, as they did after the 2008 financial crisis when local austerity held back the economy’s recovery. Congress is deadlocked over sending more cash to the states to plug the gap.

The researchers found that a one percentage-point rise in employment corresponds to a 1.56 percentage-point increase in tax revenues. They reverse-engineered that finding using state unemployment-insurance claims as of June 5 to predict the average 20% tax-revenue decline due to the impact of coronavirus. 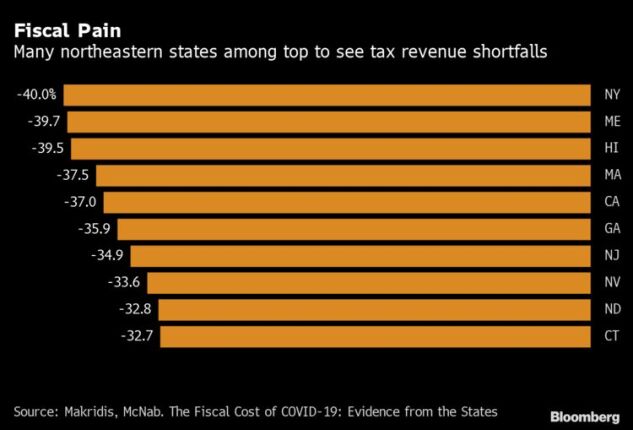 Decreases of less than 4% are expected in Alaska, Washington, D.C., and South Dakota.

(added in 3rd paragraph moves by governments to cut budgets)

To contact the reporter on this story:
in Washington at atanzi@bloomberg.net

To contact the editors responsible for this story:
at smcgregor5@bloomberg.net