Marathon Petroleum, which has a refinery in Carson Calif., is among the companies reporting tax benefits from the third virus relief law.
Photographer: Robyn Beck/AFP via Getty Images

Oil and gas, coal, and electric companies are reporting hundreds of millions in tax refunds and deferrals made available by a sweeping pandemic relief law.

That is because the industry’s financing and capital expenses generally put it in a good position to take advantage of the tax benefits in the third coronavirus response law (Public Law 116-136) ahead of the downturn resulting from the coronavirus pandemic, tax professionals say.

In the weeks after that law, known as the CARES Act, offered the tax breaks, companies across the energy sector reported that they’re at heightened risk of taking an economic hit as a result of the pandemic, if they hadn’t already. Companies are bracing for supply chain and operational disruptions and cautioning investors that utility customers may not be able to pay their bills. Demand for petroleum products has tanked, with fewer people commuting to work and airlines cutting back service.

“The global impact on economic activity has severely curtailed demand for numerous commodities,” Peabody Energy Corp. said in a SEC filing. “Within the global coal industry, supply and demand disruptions have been widespread as the COVID-19 pandemic has forced country-wide lockdowns and regional restrictions.”

Lawmakers like Sen. Bernie Sanders (I-Vt.) have criticized the hundreds of millions in tax benefits that energy companies have reported getting.

“Coronavirus has killed more than 85,000 people. Some 36 million workers have lost their jobs,” Sanders, who voted for the CARES Act, said in a May 15 tweet. “Good thing President Trump is looking out for the real victims of the coronavirus: fossil fuel executives.”

Energy companies reported benefits from a variety of tax breaks included in the CARES Act, including a payroll tax deferral that broadly allows employers to delay payments that would have been due this year. But energy companies are also well positioned to take advantage of some of the law’s narrower tax perks, including expanded write-offs for debt interest payments and accelerated refunds of a now-defunct minimum tax. 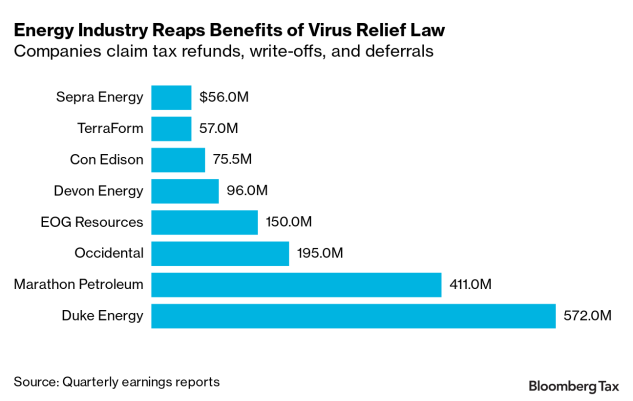 “There are very few companies that have AMT credits outstanding,” but utilities “carry some of the largest balances” due to their capital expenses and related deductions, said Todd Castagno, an accounting and tax policy analyst at Morgan Stanley.

The 2017 law made credits stemming from the minimum tax system refundable over four years, and the CARES Act accelerated those refunds to help boost liquidity.

Duke Energy—which said it would now receive its remaining $572 million AMT credit refund more quickly under the CARES Act—is among at least six companies that specifically reported lobbying on this part of the law, a Bloomberg Tax review of Senate lobbying records showed.

In an emailed statement, a Duke Energy spokesperson said liquidity resulting from the acceleration of AMT credit refunds “helps provide certainty as we continue delivering the reliable power customers need while helping to protect the health and well-being of our communities.”

Of 18 industries, the energy sector held the second-highest share of net operating losses after the pharmaceutical and biotechnology industry, with over 13%, according to Casatgno’s recent research.

But what makes oil and gas companies especially poised to take advantage of this provision is the cyclical nature of the commodity they produce and transport.

“It’s not at all surprising to me that liberalizing the use of operating loss carrybacks would disproportionately affect oil and gas,” said Matt Gardner, a senior fellow at the Institute on Taxation and Economic Policy. “I don’t think it has to be an intentional thing. The more cyclical, the more you’re piling up these NOLs, the more useful it’s going to be.”

Marathon attributed $411 million of its nearly $2 billion first quarter tax benefit to the provision, while Occidental reported a $195 million refund from the loss and alternative minimum tax provisions combined.

The energy industry is also disproportionately affected by a 2017 tax law restriction on debt interest write-offs, under tax code Section 163(j). While the regulated portions of utility companies are exempt from the restriction, oil and gas is heavily reliant on debt financing, as capital-intensive industries often are more generally.

The third relief law temporarily eased that restriction, raising the cap on deductions of interest expenses to 50% of adjusted taxable income from 30%.

More than a fifth of energy companies were hit by the lower cap, but just 7% will likely hit the higher ceiling, the Morgan Stanley report found.

Marathon Petroleum and Con Edison, reported benefiting from the change, as did the renewable energy company TerraForm Power, Inc., which said the change would boost its interest write-off by $57 million.

A drop in income during the downturn this year will lower debt-financed oil and gas companies’ interest write-off cap, so many are sure to benefit from the raised cap if they haven’t already, tax professionals said.

“To the extent that they thought they wouldn’t be 163(j)-limited, because they expected a certain level of income this year, they’ll benefit from the 163(j) changes, because they can at least take the 163(j) deductions notwithstanding a decrease in taxable income,” said Amish Shah, partner in charge of Eversheds Sutherland’s Washington office

—With assistance from Bobby Magill and Colleen Murphy.