Restaurants like this one in Paris are operating at reduced capacity as Europe reopens from pandemic lockdowns.
Photographer: Cyril Marcilhacy/Bloomberg

Governments across Europe are cutting taxes for the hospitality sector in a last-ditch attempt to prevent millions of job losses should businesses collapse.

Restaurateurs fear, nevertheless, that even with the help of sector-specific cuts to value-added tax—a sales tax paid by consumers in all EU and most European countries—they may not be able to survive.

Jacques Lovell, public affairs manager at Hotrec, a pan-European hospitality-focused industry group, said six million jobs are at risk in the European tourism sector. He warned that even as countries lift lockdowns, customers won’t rush back, and consequently many businesses will initially run at a loss.

“VAT cuts will be crucial during the de-confinement stage for restaurants, hotels, bars and cafes,” Lovell said, adding that VAT cuts would often be the difference between breaking even and possible bankruptcy. “It would help owners keep people in jobs, make investments, because there are going to be a number of investments that need to be made to support health and safety measures in particular.”

It isn’t easy making a profit in the restaurant business, and during lockdown it has been next to impossible. Service providers like Deliveroo severely squeeze per-customer revenues, and alcohol sales—on which many restaurants rely to increase their margins—are far lower on delivery orders than on eat-in meals.

German restaurant group Enchilada Franchise GmbH had to close down all of its dining rooms for several weeks. “The drop in sales at our 91 restaurants in the group is enormous,” Managing Director Torsten Petersen said. “The delivery and pickup business could not begin to compensate for the slump.”

It’s for this reason that many countries have started in the last few months to lower the VAT rate on restaurant food. It’s too early to assess such measures’ efficacy, but Lovell said that after the 2008 financial crisis, VAT cuts in France helped save a lot of businesses from bankruptcy.

“What I can see is that reduced VAT rates for restaurants and hotels is generally a well-accepted measure in most European countries,” he said on the phone. “We hope to see more reductions in the future as well.”

Generally, governments charge a lower rate of VAT with the aim of making goods or services more affordable. Non-luxury food, books, children’s clothes, and home energy, for example, are common goods subjected to reduced or zero rates of VAT.

Often, however, VAT cuts don’t translate into savings for consumers, but increased profit for owners.

When the German Bundestag cut VAT for the hospitality sector on May 28, lowering prices to get customers through the door appeared to be at least part of the rationale behind it—the Finance Ministry said in a statement it was intended to “stimulate demand and facilitate economic recovery"—but Juergen Scholz, global head of indirect tax at WTS, instead expects restaurants to keep the money to make up for lost income and make investments to comply with new health and safety measures.

The VAT cuts “will have a big impact because I would not expect a competition on prices, in other words, prices will remain stable and the margins of restaurants and hotels will increase and help keep them in business,” he said over the phone.

Around a week later, the Belgian government announced all food and drinks except alcohol would be subject to a 6% VAT rate, rather than headline 21% rate, from June 8 to Dec. 31. For Marie Michiels, who with her family owns restaurants, event rooms, and a hotel through hospitality group Restauration Nouvelle, the VAT cut was essential.

“It’s a huge help for us, it gives us an oxygen bubble which is really welcome,” Michiels said, adding that, like other hospitality groups, Restauration Nouvelle won’t be lowering its prices as it needs the difference to pay suppliers and settle invoices from earlier in the year. 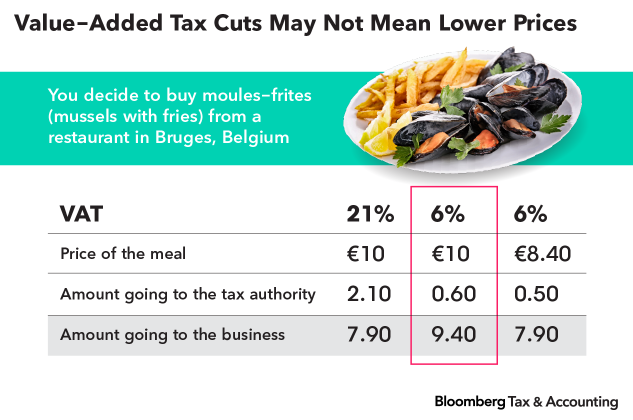 Most businesses will use the lower tax liabilities to increase their profitability, not cut prices

A country that hasn’t announced tax help specifically for the hospitality or tourism sector is Ireland. In 2019, VAT for restaurants and hotels rose to 13.5% from 9%, reversing a cut implemented to help the industry following the global financial crisis. Adrian Cummins, CEO of the Restaurants Association of Ireland, wants VAT slashed to 0%.

“We’ve set out a clear plan for a stimulus package to try and help our industry. VAT reduction is part of that,” Cummins said. He is hopeful it will happen soon and adds that the EU should relax state aid and taxation regulations as “the rulebook has been ripped up.”

But in countries that have lowered VAT rates, restaurant owners fear that the measures won’t provide enough help if they are only implemented for six months to a year.

“We wish this reduction would stay for the next three to five years, so that companies could create the necessary conditions to be able to repay the promotional loans,” Petersen, at Enchilada Franchise, said of Germany’s VAT cut for restaurants.

Michiels concurred, saying that considering a quarter of the year was completely lost, it will take more than six months to make up for. Restaurant owners everywhere are wary of giving a specific timeline for recovery, but considering the volatility of the situation they agree that it will take years, not months, to get back to pre-pandemic levels.

Salvatore Aloe, co-owner of 15 restaurants in Italy and London through Berberè Pizzeria, said he is staying optimistic but the last few months have been really tough.

“Liquidity is our biggest problem at the moment, after three months of closing down restaurants and then reopening with only 40% of the revenue compared to an average week,” Aloe said.

Besides VAT reductions for the sector, Aloe, who said the company employs around 200 people, said the government could help by reducing labor costs and creating a scheme to help with rents. The most important thing the government can provide, he said, is certainty for businesses.

Italy’s Prime Minister Giuseppe Conte said on June 21 that new measures to help the country would be announced in a September package. VAT reductions for the tourism industry, which was worth over 13% of Italy’s GDP in 2019, will be part of the measures, deputy finance minister Laura Castelli told La Repubblica. The government already announced on May 15 that restaurants and bars would be exempt from tax on the occupation of public spaces and areas until Oct. 31.

”If the government is quick to show it will act, that can help businesses, it will encourage companies like ours to plan the future and to not stop development and this means job opportunity of course,” Aloe added.

If sector-specific measures fall short of their objective to keep most restaurants and hotels afloat, governments could try wider VAT reductions such as the one announced in Germany—a move Italy could yet emulate—or more direct government support, such as the U.K.'s recently announced 50% subsidy on restaurant food.