The latest plan released by House Democrats scales back many of President Biden’s proposals to hike taxes on corporations and rich investors, as moderates and progressives tussle over how far to go to . But they included an element the White House left out.

The package by the Ways and Means Committee calls for a revamp of the U.S. estate-and-gift tax, a levy on the country’s largest fortunes which has been greatly weakened over decades. If House Democrats have their way, rich Americans will soon be scrambling for new and probably more expensive ways to pass wealth onto heirs.

The 881-page legislative proposal cracks down on a number of strategies that have made the tax easy to avoid if you hire the right advisers. That could upend how the top 0.1% manages their fortunes and whether they can move millions, sometimes billions, of dollars’ worth of assets outside their estates tax-free.

“That’s a huge sea change,” said Brad Dillon, a senior wealth strategist at UBS Group AG in New York. The move eliminates a majority of transactions estate planners would typically advise clients to do, he said.

Starting next year, Democrats would make more millionaires subject to the tax, by cutting in half the lifetime exemption — now $23.4 million for a married couple — which is the amount that can be passed on without triggering the 40% estate or gift levy. 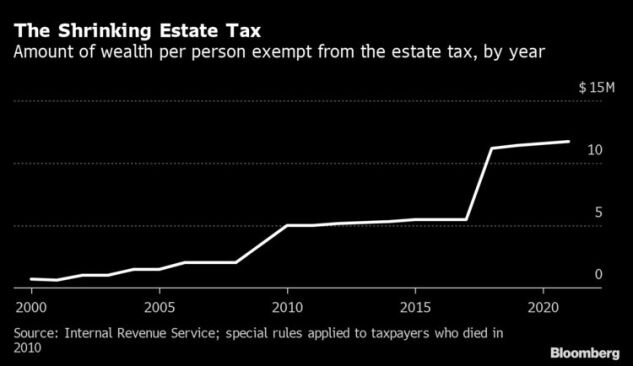 That change, however, was scheduled to happen at the end of 2025 anyway. More significantly, the proposal takes aim at sales or gifts to popular vehicles, known as “intentionally defective grantor trusts,” that are used to transfer wealth free of estate tax.

The plan would pull grantor trusts into a wealthy person’s taxable estate when that person is the “deemed owner” of the trust. The committee would also tax a sale from a grantor trust to its owner.

“They are taking a hammer to the grantor trust rules and demolishing them,” Dillon said.

The committee would also restrict the use of discounts that reduce the value of wealthy families’ assets for estate and gift tax purposes.

Currently, the wealthy can take a valuation discount on an asset, including publicly traded stock, by placing it inside an LLC or another entity and then dividing it up among various heirs or trusts benefiting them. Because none of these owners has full control of the asset, they are currently allowed to reduce its total value for a tax break.

The new rule would no longer allow discounts, at least for “passive” assets. Assets used in active businesses can still be discounted under the proposal — a nod to potential concerns that could be raised by family farms and businesses.

Tax experts and advisers to the wealthy are still uncertain how all this would work in practice. For example, several didn’t know how or if the changes to grantor trusts would affect one of the most common planning techniques, the grantor retained annuity trust.

Determining whether an asset is a passive asset or business asset under the proposed restriction on valuation discounts is also likely to be difficult, especially in cases where a taxpayer has a mix of both, said James F. Hogan, a managing director at Andersen Tax LLC who formerly worked for the Internal Revenue Service.

The IRS “is going to be tasked with a very huge project in determining where you cross that line,” he said.

The Obama administration tried to limit the use of valuation discounts through proposed regulations in 2016, but faced backlash from Republican lawmakers and trade groups representing family farms and businesses. The rules were later withdrawn by the Trump administration.

The Ways and Means plan isn’t all bad news for estate planners and their clients. The new rules for grantor trusts would only apply to future trusts or transfers occurring after the change is enacted. So, assets in existing trusts would be safe, and billionaires and millionaires who have already used trusts and other techniques to pass on the bulk of their fortunes to heirs may be largely unaffected.

The legislation also doesn’t address , vehicles — which some Democrats have proposed to limit — that can be used to pass wealth from generation to generation without having to pay estate, gift, or generation-skipping transfer taxes.

The House Democrats’ plan would provide a window for rich Americans to take advantage of the higher lifetime exemption between now and the end of the year. “Most clients have already used this exemption,” said Beth Shapiro Kaufman, a member in Caplin & Drysdale’s Washington, D.C., office. But anyone who’s been procrastinating will have a few months to carry out planning strategies.

The plan also currently excludes Biden’s proposal to impose capital gains taxes on appreciated assets held by millionaires and billionaires at death, ending a benefit known as step-up in basis.

“I’m breathing a sigh of relief. Things are not as aggressive as they were initially proposed,” said Mallon Fitzpatrick, principal at Robertson Stephens in New York, who advises clients who generally have net worths of $5 million to $125 million. “We’ve dodged a bullet a little bit.”

The nonpartisan Joint Committee on Taxation estimated Tuesday that the Ways and Means proposal would hike the average tax rate on Americans earning $1 million or more to 37.3% in 2023, up from 30.2% under present law, bringing in an extra $96.5 billion from that elite group.

The House, however, could still amend its legislation and the proposal hasn’t been discarded yet in the Senate, which is actively working on its own bill. The Senate Finance Committee’s top Democrat, Ron Wyden, in a statement released by his office Monday indicated the step up in basis change is still very much in play.

Some groups, like the Family Business Coalition, are already ramping up efforts to lobby against the changes proposed in the Ways and Means package. The group’s chairman, Palmer Schoening, said in an email Monday that the changes to valuation discounts and grantors trusts would be “akin to a stealth death tax increase for many family businesses.”

He urged other coalition partners to contact lawmakers in the House and Senate to oppose the Ways and Means’ proposal.

Others praised the plan as a step toward a fairer tax system.

“Both the income tax and the estate and gift taxes have been allowed to fall into disrepair, such that it is easy for wealthy taxpayers to almost completely escape both of these forms of taxation,” Indiana University law professor David Gamage said. “These reforms would bolster the estate tax to improve its effectiveness at actually reaching very wealthy taxpayers.”

(Updates with additional quote in in 20th paragraph.)

To contact the authors of this story:
in Arlington at aversprille1@bloomberg.net

in New York at bsteverman@bloomberg.net

To contact the editor responsible for this story:
at pnarayanan9@bloomberg.net