High-profile tax disputes to watch next year include those between the IRS and multinational companies.
Photographer: Gabby Jones/Bloomberg

Litigation with billions of dollars at stake for and and a Supreme Court ruling on challenging tax rules are among the legal cases to watch in 2021.

Court watchers are also following a series of cases testing provisions and regulations tied to the 2017 tax law. The outcome of those battles could shape how Treasury approaches tax rules in the future, particularly when it comes to whether its rule-writing complies with procedural requirements under the Administrative Procedure Act.

“It is very much on the minds of practitioners that, from an Administrative Procedure Act perspective, there is fertile ground for challenging Treasury,” said Stu Bassin, founder of the Bassin Law Firm PLLC and former Justice Department Tax Division litigator.

Here are the tax cases to watch over the next year:

In June, the U.S. Tax Court trial will resume between Facebook and the IRS in a case, Facebook v. Commissioner, concerning $1.73 million in taxes on intangible assets, including trademarks and technology, that the company transferred to its Irish office. A win for the IRS could cost the social media giant nearly $9 billion in taxes, interest, and penalties.

Officials at the Organization for Economic Cooperation and Development and within the European Union are closely watching the case as they grapple with guidelines for how companies should value intercompany transactions involving certain intangible property, said Irina Pisareva, partner at Sullivan & Worcester LLP.

Several tax attorneys said they are expecting Coca-Cola to appeal a Tax Court opinion saying the company owes the bulk of a $3.4 billion tax bill linked to its multinational operations. Coca-Cola said at the time of the opinion that it was considering the “potential grounds for its appeal,” and declined on Dec. 16 to comment further.

Justices to Weigh In on Tax Rules

The U.S. Supreme Court is expected to rule in CIC Services v. IRS, which could significantly impact tax enforcement.

The consulting firm wants a court to consider its challenge against a penalty-backed reporting requirement, but it has been twice blocked by the Anti-Injunction Act, which generally prohibits lawsuits aimed at restraining tax assessment or collection.

The justices questioned the IRS in Dec. 1 oral arguments, with some suggesting that the firm may have no way to get judicial review without risking criminal exposure. A win for CIC Services would allow taxpayers to challenge other third-party reporting requirements.

“While the ruling may have limited applicability, it will address an important concern with how the IRS labels transactions subject to burdensome reporting requirements without warning, and without notice to and comment from taxpayers that are impacted by the IRS designations,” said Charles Ruchelman, a member at Caplin & Drysdale specializing in tax controversy. 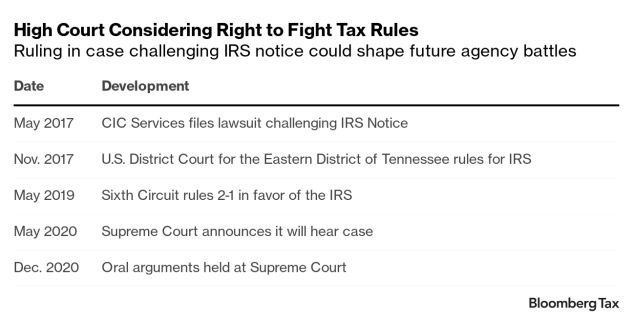 Multiple lawsuits challenging international provisions of the 2017 tax law and related regulations are set to unfold in the new year.

Developments are expected in Liberty Global, Inc. v. United States, a lawsuit claiming that Treasury owes the telecommunications company $109 million after issuing temporary rules that allegedly exceeded the department’s authority. The rules (T.D. 9865) relate to a foreign-dividend deduction under tax code Section 245A.

Several cases—including FedEx Corp. v. United States and Silver v. IRS—challenge regulations over a Section 965 levy that applies to the untaxed foreign earnings of U.S. shareholders of certain foreign corporations, treating the earnings as if they were brought back to the U.S.

And a January appeal is possible in Moore v. United States after a federal court dismissed a couple’s constitutional challenge to the transition tax. 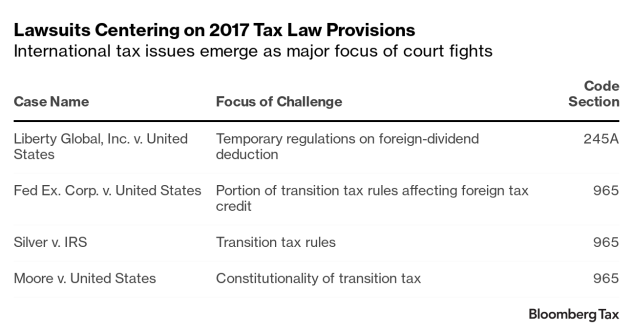 An appeals court ruling is expected in New York v. Mnuchin over the constitutionality of the 2017 tax law’s SALT cap, which limited individual federal deductions for state and local tax payments to $10,000. New York, New Jersey, Connecticut, and Maryland faced skeptical judges in December as they asked the U.S. Court of Appeals for the Second Circuit to reverse a lower court’s ruling upholding the cap.

Litigation over conservation easements—which involve donating the right to develop land for preservation purposes—will continue to unfold. The transactions can generate a tax deduction if the tax code’s rules are followed.

The area is a high enforcement priority for the IRS and also one where it saw frequent wins this year.

The Tax Court will again be addressing the validity of two easement deductions in Pine Mountain Preserve, LLP v. Commissioner after the Eleventh Circuit tossed out an earlier ruling that had disallowed the deductions.