As years-long negotiations on how to tax tech giants like Facebook and Amazon head toward a deal this summer, developing countries still have a list of key issues they want addressed.

Those countries want to avoid dispute resolution procedures with multinational companies and wealthier countries they say threaten their sovereignty, and hope to eke a little more revenue out of the deal.

The Organization for Economic Cooperation and Development’s global tax rewrite is an international effort, bringing an ever-growing list of countries—currently numbering 139—into the talks. Group of 20 finance ministers will meet in July aiming to reach a high-level accord, with further details agreed to in the fall.

The wealthy nations leading the negotiations still need developing countries’ support to have a global agreement this year, and implement the plan in years ahead.

“There are 139 countries at the table, and any agreement will have to meet the needs of small and large countries, developed and developing,” Paschal Donohoe, Minister for Finance for Ireland, said in a tweet June 5.

Large developing countries—including several G-20 members—have had a voice in helping shape the discussions. For example, negotiators are looking to address China’s concerns about exceptions to the plan’s minimum tax, Bloomberg reported Wednesday.

“The large emerging markets that are part of the G20 present quite different issues from those for the small low income countries,” Victoria Perry, deputy director in the Fiscal Affairs Department at the International Monetary Fund, said in an email.

Smaller nations, which may see only a little revenue from a plan that would redirect some corporate profits to market economies, are hoping to maximize that gain.

And developing countries both large and small draw a red line at dispute resolution procedures that would bind them to an outcome, which they say disadvantages them against wealthier countries and multinational companies.

India and Brazil look to be amenable, and small developing countries want to participate in the coming agreement even though they may gain less revenue, a person familiar with discussions said.

Finance ministries for Brazil and India didn’t respond to a request for comment.

Smaller developing countries should sign on to a deal despite the limited revenue, Perry said.

“At this late stage, whatever is going to come out and however little revenue effect it may actually have, it is still likely to be a huge step forward in the sense of opening a door to these ideas,” she said. 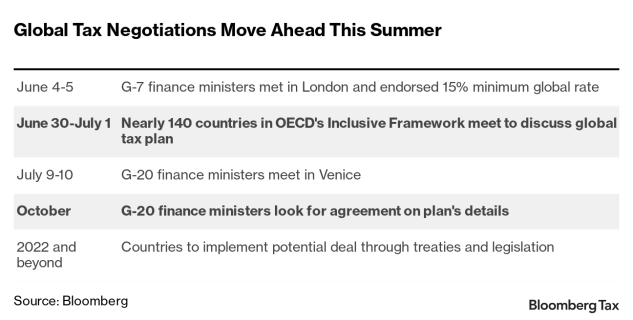 The OECD’s two-part plan would put more multinational profits in the countries where they have sales, rather than headquarters—known as Pillar One—and create a global minimum corporate tax—known as Pillar Two.

The OECD has said Pillar One must be widely implemented, since it calls for countries to both gain and cede taxing rights.

Pillar One will also call for countries to give up unilateral measures like digital services taxes, and agree not to impose new ones in the future.

That means countries will be weighing the limited revenue they gain under Pillar One against the cost of forgoing unilateral measures, said Marilou Uy, director of the Intergovernmental Group of 24, a group of developing countries whose members include Brazil, India, and Nigeria.

Replacing digital taxes with a multilateral agreement is one of the key goals of the OECD talks. Countries including France, Kenya, and India have enacted their own taxes aimed at the revenue of tech giants as they wait for an international deal. The measures worry multinational companies, which see a growing compliance headache, and create international trade frictions.

Countries would have to change their own tax rules and treaties to implement the plan—which will likely take years.

They could sign an agreement this summer, but the real question will be whether they sign on to the multilateral pact and pass the legislation required to implement the changes, said Carlos Protto, director of international tax relations at Argentina’s Ministry of Treasury, speaking in his own capacity and not representing the government.

Protto said he believes key elements of the deal will have to be on the table in July for countries to agree to a deal.

Developing countries also hope to see lower thresholds for revenue and profitability that will capture more profits for smaller countries.

“At this stage, realistically, they’re trying to maximize whatever they can,” said Abdul Chowdhary, senior program officer—tax cooperation and policy at the South Centre, the intergovernmental organization of developing countries.

In a statement last weekend, G-7 finance ministers called for Pillar One’s reallocation rules, known as Amount A, to reallocate 20% of a company’s profits above a 10% profit margin threshold. That amount would be reallocated and taxed in the countries the company sells into.

The 20%-over-10% proposal from the G-7 “doesn’t seem appealing to low income countries” that don’t have significant markets, Protto said following the G-7 announcement. The discussion about those numbers is still pending, he said.

Developing countries have pushed for a greater share of profits to be subject to reallocation. The African Tax Administration Forum, which works with governments from across the continent, suggested reallocating a multinational company’s total profits—rather than just a portion of profits above a certain margin, as the G-7 suggested—in a proposal released May 12.

There’s also still an open discussion on nexus threshold—what level of activity a company must have within a country to trigger the Amount A reallocation, Protto said. Small countries will lose out on Amount A if that threshold is too high to capture a multinational’s activity in a small market.

The U.S. told other governments in April it would be flexible about nexus to “ensure Pillar 1 benefits developing countries.”

In that proposal, the U.S. also called for applying Pillar One to only about 100 of the largest and most profitable multinationals. The cut-offs for annual revenue and profit margin are still under discussion, but the U.S. proposal envisions about a $20 billion revenue threshold, Bloomberg reported June 2.

The previous working version of the plan would have included a much larger number of companies—potentially thousands.

For developing countries looking to maximize their revenue gain from Amount A, “this is going in the wrong direction,” Chowdhary said.

Businesses have seen the project as an opportunity to expand the use of mandatory binding arbitration for tax disputes, which is currently in some but not all tax treaties. Companies favor binding arbitration because it gives them more certainty than non-binding processes that can last for years without guaranteeing an outcome.

Throughout the negotiations, developing countries have spoken out against mandatory binding arbitration, which they say could compromise their sovereignty and puts low-resource tax administrations at a disadvantage against richer countries and companies.

The bulk of the revenue raised under the OECD plan will come from the second pillar, a global minimum tax.

Some countries are also concerned that Pillar Two could reduce their autonomy to use tax incentives to attract foreign investment. China doesn’t want the minimum tax to take away countries’ ability to offer incentives that encourage research and technology investment, Bloomberg reported.

The G-7 called for a 15% minimum tax rate—the number the U.S. recently proposed as a floor in the negotiations.

Tax justice advocates argue that isn’t high enough, and want the OECD global rate to be 21%, which the Biden administration is proposing for the U.S.'s own minimum tax.

“A global minimum tax rate of 15% is far too low to end the damaging race to the bottom on corporate tax and properly clamp down on tax havens,” José Antonio Ocampo, a professor at Columbia University and chair of the Independent Commission for the Reform of International Corporate Taxation, said in a statement following the G-7 announcement.

On Thursday Donohoe said he would make the case for smaller countries being able to set their tax rate as low as 12.5%.

— With assistance from Birgit Jennen