The chairman of the influential Senate Finance Committee will push for a vote on his drug-pricing measure without the help of critical allies: Senate Democrats.

(R-Iowa) will re-introduce a drug pricing package () he assembled with the ranking member of his committee, (D-Ore.), and soon call on Senate leaders to allow debate on the measure, Grassley spokesman Michael Zona said.

The senator, term-limited as chairman of the Finance panel after this year, wants his measure included in the next coronavirus legislation and plans to move ahead “with or without Democrats,” Zona said.

The Covid-19 pandemic has both heightened the urgency of reining in pharmaceutical costs yet also made it harder for lawmakers to act. Drugmakers say limiting their profits could hamper efforts to create a vaccine against the virus, but medicines to treat it come with significant price tags. set the price for its widely used Remdesivir at $2,340 for a five-day treatment.

Gilead Chooses Middle Ground in Pricing of Its Coronavirus Drug

Both parties, with control of the Senate up for grabs in the November elections, swapped blame for inaction on drug prices. 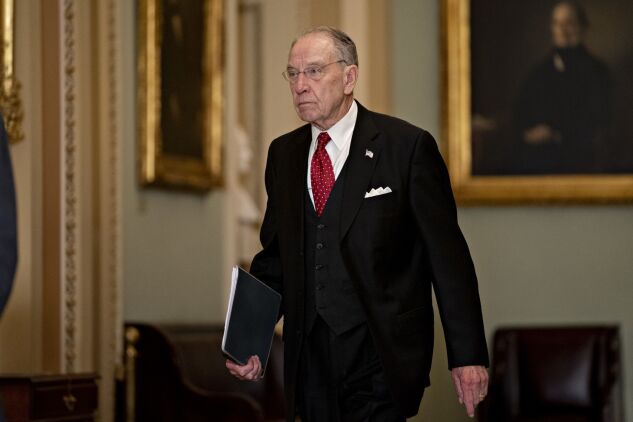 “Democrats have left the negotiating table” at the urging of party leaders, Grassley said. “I can only assume the Democratic Party would rather use the issue of drug prices as a political hammer in November’s election than work to address it now,” he said in an op-ed in the Wall Street Journal Monday. “Perhaps they hope to pass more left-leaning legislation next year, if they win more power.”

Democrats are “not interested in aiding Republicans as they play political games and pretend to support lowering prescription drug prices,” Wyden said.

“Democrats have not walked away from the table on drug pricing—Republicans never showed up in the first place,” Wyden said in a statement. He said there’s no reason to expect the GOP-led chamber to allow a vote on the Grassley-Wyden bill.

Wyden noted that the House passed a measure to direct the government to demand lower prices from drugmakers last year (). Senate leaders, including Grassley, have said they won’t support that bill.

Garnering support for the legislation, which would cap drug costs for Medicare beneficiaries and force drug manufacturers to provide Medicare inflation rebates, has been an uphill battle for Grassley over the past year.

He gradually gained backing from more of his fellow Republicans in the Senate, often persuading them one-by-one to make shows of support since last summer. Democrats in the Senate were essential to getting the legislation even out of the Finance Committee, which approved it with the support of 13 Democrats and six Republicans in July 2019.

Grassley has previously said he needs at least 25 Republican co-sponsors to get his bill to the floor and sees backing from the White House as important in getting more votes. About a dozen Republicans other than Grassley have so far publicly expressed support for the legislation.

Grassley said he asked President Donald Trump earlier this month in a caucus meeting if he would support his legislation. Trump, who has backed the bill, gave an “emphatic yes,” Grassley said.

The Grassley-Wyden package would create a rebate system in Medicare Part B and Part D beginning in 2022 for brand-name drugs and biological products with prices that increase faster than inflation. Conservative groups and some Senate Republicans have opposed the rebate system for Part D, the prescription drug benefit program, but not for Part B, the outpatient services program.

To contact the reporter on this story: in Washington at aruoff@bgov.com

To contact the editors responsible for this story: at phendrie@bgov.com; at rmeszoly@bgov.com