Frustrated at losing movie and television production to other states with rich tax breaks, California is looking to expand its own incentives to keep its flagship industry at home.

Lawmakers are considering four bills—and more could be coming—that push against the limits of California’s 10-year-old film and television tax credit program and stay competitive with more generous breaks in states including Georgia, which has overtaken California as the top movie-production state, and New Mexico, which used incentives to land a production hub.

More than 30 other states use tax breaks to poach productions, with Hawaii, Illinois, Massachusetts, Montana, and West Virginia weighing bills this year to renew or expand their programs.

Entertainment studios, hit hard by production shutdowns and closed movie theaters during the Covid-19 pandemic, are poised to benefit from the proposals as they race to meet demand for content on streaming services like Disney+, HBOMax, Netflix, Paramount+, and Peacock. They’re part of the discussions but aren’t weighing in publicly yet on the bills.

“Do you want studios to continue to do well but expand in places other than California?” said Thomas Davis, president of the California Council of the International Alliance of Theatrical Stage Employees and business manager for IATSE Local 80. “More studios in Atlanta doesn’t help people in California.”

“This could certainly spur more local investment especially as traditional studios face intense competition from the likes of Netflix and Amazon,” she said.

The proposed bills use different approaches to attack the same problem: demand for California’s film and TV tax credit outstrips supply every year. Total annual funding is capped at $330 million, with that total divided into buckets for feature films, independent films, and new, relocating or recurring TV shows, pilots, or mini-series.

Twenty-two out of 61 applicants won awards in the most recent round for feature and independent films announced March 1 by the California Film Commission, which oversees the program. Reese Witherspoon’s film “Ashley’s War” and Jason Bateman’s film “Here Comes the Flood” were among the latest winners.

In the TV category, new shows are crowded out by recurring shows that continue to get tax credits each season. “American Horror Story” on FX, “Ballers” on HBO, and “This is Us” on NBC are among 25 popular shows that gobble up the funding year after year. The two most recent round of TV awards in August 2020 and March 2021 were open only to series relocating to California. 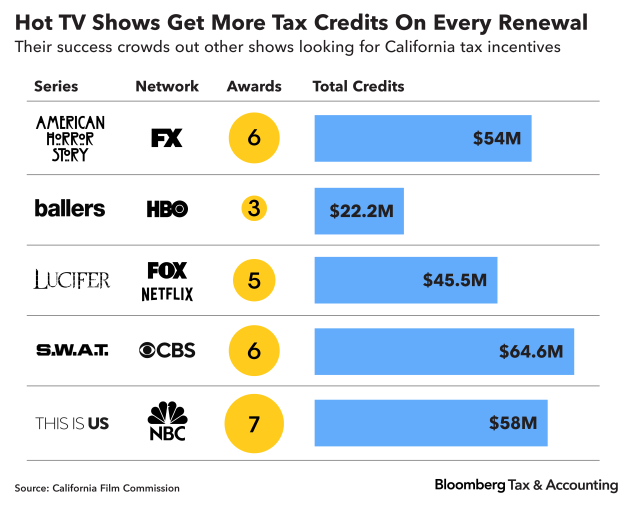 The Legislature’s independent fiscal policy analyst is cautioning lawmakers to focus economic stimulus on programs that are well designed and clearly targeted, can make an impact quickly, have strong policy justifications, and don’t drain revenue or worsen inequality.

In the past, the Legislative Analyst’s Office has found the costs of the state’s entertainment tax incentives outweigh the benefits, and one-third of the projects receiving the credit would have been made in California with or without it. Still, the analyst has acknowledged the importance of defending California’s flagship industry from the financial lure of other states and countries.

Without commenting on specific legislation, a spokeswoman for said the current program is creating jobs and showing the industry California is committed to keeping its status as the film and TV capital of the world.

“The entertainment industry was born in California, and it’s a critical part of our economy,” said Kaitlin Lewis, assistant deputy director of communications for the Governor’s Office of Business and Economic Development. “Despite the challenges caused by COVID-19, demand for stages and other production infrastructure remains strong across the state, and we will continue to work with our industry partners to keep it that way.

Unions that supply the industry’s day-to-day workers back some of the bills as tools to help rebuild the state’s workforce as the pandemic fades. The bills would reward construction of new sound stages, strong wages, and a diverse workforce while keeping accountability measures not always present in other states to ensure recipients live up to their promises.

“If you’re talking about handing out money just because you can, that’s not what we’re about,” Davis said. “We want to ensure the jobs stay in California.”

The theatrical stage union and the California State Building and Construction Trades Council are backing a bill to help get around the state tax credit’s limits by focusing on building more sound stages, which were in short supply before the pandemic.

S.B. 485 by Sen. Anthony Portantino (D) would create a new credit category for companies that spend at least $15 million to construct or renovate a sound stage in California. Once the company uses the sound stage or leases it to a production that films there, it could receive a credit for 20% of qualified expenditures. The credit would increase to 25% if the company spends $25 million or more on construction.

Union-friendly provisions of the bill require the construction projects to pay prevailing wages—the hourly rate usually paid to construction or craft workers in the nearest labor market—and use workers trained by the building trades unions. The companies must pay at least $7.5 million in annual wages and could claim the credit yearly for productions that begin within five years of construction and remain at the sound stage.

Similarly, Sen. Maria Elena Durazo (D) has revived her bill that failed in 2020 (S.B. 51`) to create a refundable credit for companies that create at least 5,000 prevailing-wage jobs for 10 years as long as the companies reinvest the credit into building media production facilities.

“We want to make sure that we are building the infrastructure that will allow us to continue to be destination number 1 for the film industry and to create more of the good, middle-class jobs that come with it,” Durazo said in an email.

To diversify hiring in the industry, Sen. Ben Allen (D)is proposing a bill (S.B. 611) that would improve a company’s chances of winning the existing film and TV tax credit if it hires people who have completed training through the film commission’s Pilot Skills Career Pathway program or similar programs that partner with labor unions for training and apprenticeships.

Another bill focused on diversity would expand the existing credit program for independent films if they are produced by companies with at least 51% ownership by a minority individual or group. A.B. 986 by Assemblyman Mike Gipson (D) /would give films a 40% credit for qualified expenses – up from the current 25% credit for independent films – and provide $200 million in annual funding for the expansion.

State Treasurer Fiona Ma (D) is sponsoring the bill, and said she has support from several minority studios including Milojo Productions, owned by Kelly Ripa and her husband Mark Consuelos; Mario Lopez Productions, and Verso Entertainment, owned by Jessica Alba and Cash Warren.

“All of the major studios are not doing enough about diversity,” Ma said. “The system is skewed.”

Tax incentives for the film industry tend to be the least effective economic development policies, but could be more effective if they focus on specific problems like a lack of diversity, said Nathan Jensen, a government and economics professor at the University of Texas who studies tax incentives.

“Politicians like to expand these programs to encompass more goals. But this often leads to these programs not accomplishing any goals,” Jensen said.