A new administration in the U.S. and OECD persistence may bring a better chance for resolution of the digital services tax quandary. Anshu Khanna of Nangia Andersen LLP in San Francisco outlines some of the issues, illustrates the growth of digital services around the globe, and outlines actions and proposals from several jurisdictions for the implementation of DSTs.

Digitalization of everything is the motto of 2021. With Covid-19, there has been a significant acceleration in the growth of the online world. All eyes are on the Biden Administration as more and more countries join the digital tax bandwagon, and the OECD struggles to find consensus for digital service taxes (DST). As an important trade partner for the world, and the country with the most companies impacted by the DST wave, the U.S.’s actions now will have large ramifications.

Under President Barack Obama, the U.S. participated in the 2015 OECD project on base erosion and profit shifting (BEPS), although he had pushed back on some of the ideas. Despite President Donald Trump’s isolationist America First rhetoric, his administration was engaged in multilateral negotiations to address perceived international tax avoidance. To fend off DST, the U.S. initially warmed to a proposal for countries having some taxing rights on income of multinational corporations that use their local markets and audiences, regardless of their physical presence. But the U.S. dramatically and unexpectedly reversed the course in late 2019 claiming that it largely targets American multinationals such as Apple, Amazon, Facebook, and Google. The U.S. also initiated the process to enact tariffs against several EU nations who adopted DST, delaying those until 2021 to allow for further negotiations.

Covid-19, OECD’s delay in consensus and more and more governments announcing DST have certainly changed the rules of the game. Biden’s expected position with regard to the OECD’s approach will be important. His administration will face mounting pressure to resolve the digital tax problem multilaterally, as a growing number of countries turn to unilateral measures to collect more revenue from tech companies, and the U.N. pursues a digital tax treaty solution to help developing countries. Biden, as the new President of the U.S., has given new hope to European government officials who are pushing for a global agreement that would enlarge the taxing rights of market countries with respect to the profits of highly digitalized nonresident businesses. There is hope for opening up stalled talks on a digital tax overhaul and maybe a fresh perspective to close the discussions on digital taxes.

Throughout these national and international changes, the U.S. has not wavered in its stance that digital-specific taxes discriminate against U.S. tech companies. Although both Trump’s and Biden’s policies are deeply divided, opposition to digital services taxes is one of the very few things both parties might agree on. Biden has often criticized the tech companies for shirking their tax obligations, but his campaign platform did not include measures singling out digital companies. It’s difficult to predict his administration’s stance considering the sentiment against DST across parties.

One area where Biden almost certainly differs from Trump is on the tariffs. Biden has promised a more constructive and multilateral approach to foreign policy and would almost certainly tone down tariff threats, which could thaw the negotiations a bit.

Impact on U.S. Companies and U.S. Stance So Far

Without an OECD agreement and countries going ahead with their own versions of the taxes, the entire situation could result in a world-wide retaliatory tax and tariff war between the U.S. and other nations. As a measure of countering growing “protectionism,” the U.S. Trade Representative (USTR) announced a series of measures. The U.S. remains an important trade partner for the EU and for many Asian countries including India. The result of the USTR’s notice raises serious concerns about the possibility of increased trade tensions with EU member countries and any other country contemplating imposition of DSTs, even with a new U.S. administration in office in 2021.

DST Foundation by the OECD and Its Recent Report

The OECD has been working with an unstoppable attitude. A quick recap of its journey:

As is evident from the graphic below, digital presence is increasing its footprint relentlessly.

The digital economy surge and Covid-19 led the EU and several other countries to jump on the digital tax bandwagon and enact their own DSTs to tax digital multinationals. India being the front runner for the digital tax measures, was the first country to introduce it in 2016. 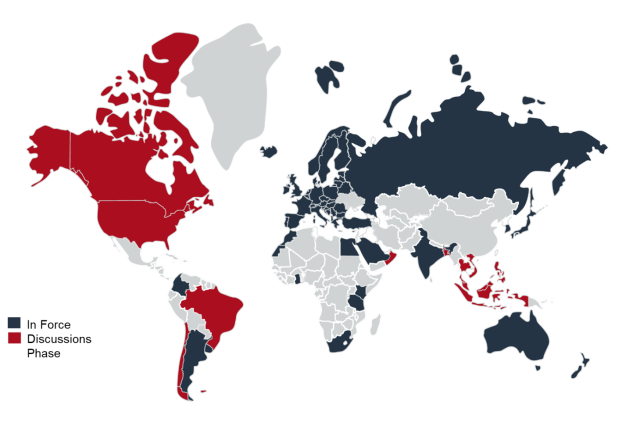 Comparative chart of countries’ regulations is below:

1. Burden of extra cost to businesses and at times to customer as well: DSTs threaten to substantially raise the cost of business for many companies. This all leads to a huge cash flow impact. Some of the big tech giants are passing on the additional tax burden of DST to their customers.

2. Need for friendly, uniform, and easy system: With differing scopes and thresholds for DSTs in each country, the compliance burden on e-commerce platforms, search engines, and social media platforms has increased manifold. A few nations have complicated mechanisms. They require local tax registrations and complex fillings and require them to track data based on users in each jurisdiction.

3. Limited window for compliance: A few countries have introduced it without enough notice and guidance. Major tech giants across the globe have expressed their concerns over such levies, remarking that the effective time window to comply with the new levy is always too short and their systems would need considerable overhaul to keep track of IP addresses and their invoicing systems.

4. Need to sort out other open issues like the double taxation issue in various jurisdictions, impact on national incentives for research, innovation, priority of the subject to tax rule over the income inclusion rule, etc.

The story of DST will continue to unfold, but as long as there is no international consensus to change the current concept of permanent establishment to a digital one that allows countries to tax digital multinationals on income tax, this tax appears legitimate. At present, while the globally accepted approach to tax the digital economy is underway, digital companies will be required to comply with the unilateral provisions introduced by market jurisdictions in their domestic laws. Companies need to closely monitor local tax changes in jurisdictions where they do business digitally and understand if they fall under the scope of DST. Different countries have different coverage scope, methodology, threshold, etc. In the absence of consistency in rules, global companies need to have the right kind of tax expertise to continuously track global developments and determine their obligations considering VAT, treaty, etc. and ensure correct implementation and compliance.

Passing on the DST burden to customers defeats the purpose and intention of legislation of countries introducing DST. There is the possibility of retaliatory measures or additional reporting/questioning by the tax authorities. Companies should get ready for that. In addition, there is a reputational issue, and it’s contrary to their ethical responsibility to their user community.

A comprehensive, principled, multilateral solution is better than unilateral. A collaborative approach together with business is highly recommended in order to fully grasp challenges, implications, opportunities, and solutions that the digital economy presents.

The integrity and coordinated implementation of the international tax system are critical to establishing a consistent global tax system that better facilitates cross-border trade and economic growth, and Covid-19 has added fuel to this fire. It has awakened leaders who have political will, and a concerted global intent to resolve this issue, realizing the magnitude and challenges it creates for the economy.

Unilateral measures are intermediary measures to be replaced by OECD regulations once a consensus is reached among nearly 140 jurisdictions on rewriting global tax rules to better fit digital business models that can operate in a market without physical presence. The question is WHEN. The OECD is aiming for consensus by mid-2021. Let’s see where OECD persistence, the Biden administration, and political will takes us. As digitalization continues to be an important driver for global economic growth, and the U.S. being the frontrunner, I hope that the U.S. will work with the OECD while protecting its interests.

Anshu Khanna is a partner at Nangia Andersen LLP in San Francisco.